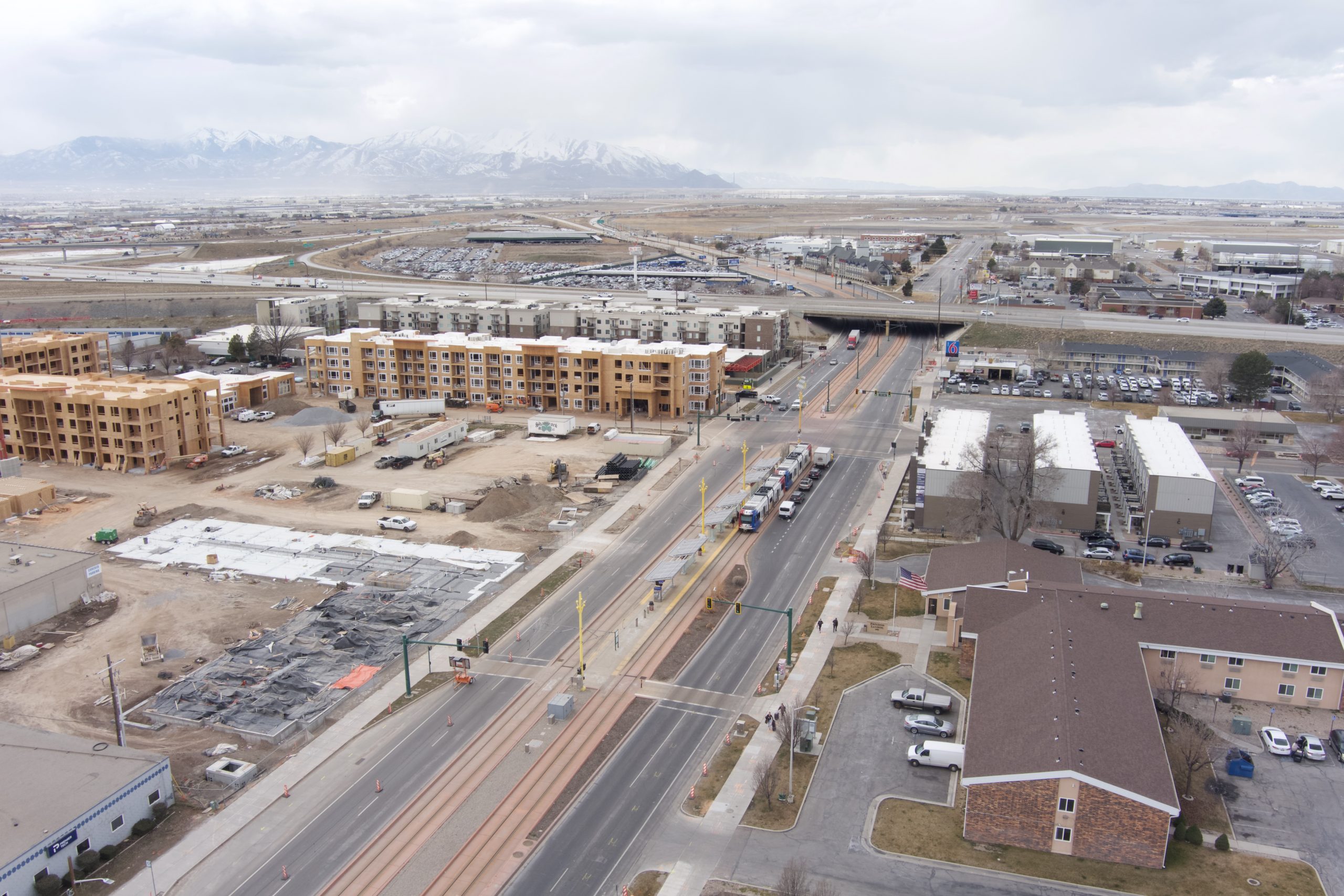 With nearly 650 feet of street frontage, the Village at North Station (1925 W N Temple) will be playing more than a couple of key notes in setting the tone for the western end of the transit corridor.

At the North Temple street frontage it replaces a surface pay lot servicing the SLC Airport, and a one-story bank building with a parking lot and drive-thru.

It is immediately adjacent to the 1940 W Trax station, the Airport Green Line’s penultimate stop. I-215 is a couple of frisbee throws to the west.

While not required by the TSA Transit Station Area code, the new building (to be located in the blank space at the top of the site plan above) proposes to house over 9000 sf of retail space, enough for grocery store or multiple smaller businesses. It would be the first retail space incorporated into the three recently-built residential projects that front N Temple – Meridian, North Temple Flats, and North Metro Townhomes –  at the west end of the corridor.

From a policy perspective, is that enough to entice pedestrians onto N Temple? What will create the walkable, mixed-use environment intended by the master plan and zoning?

The importance of “Building H”

The project has three buildings fronting North Temple, as well as three drive entrances. Two of those buildings – at the project’s northwest and northeast corners – are currently under construction. Fronting N Temple, both of those buildings (A and G) offer exclusively residential units at the ground floor.

Building G street frontage photos, at the NW corner of the project, and rendering of Building A, at the NE corner. Photos by Luke Garrott, image courtesy Architecture Belgique.

The newly-designed building under city consideration is 5-stories and L-shaped, and will offer 58 subsidized units (whether they will be at <60% AMI, or more deeply affordable, was unknown at press time). Fronting N Temple will be 9356 sf of retail space.

That N Temple facade stretches 158 feet, and 72% of that frontage is window glazing, according to Architecture Belgique’s project narrative submitted to the city.

“Large store front and multiple entrance[s] along North Temple are sure to engage pedestrians and draw attention to future commercial spaces,” the applicant, on behalf of developer Gardner-Batt, stated.

The project is yet to be scheduled for Planning Commission review.