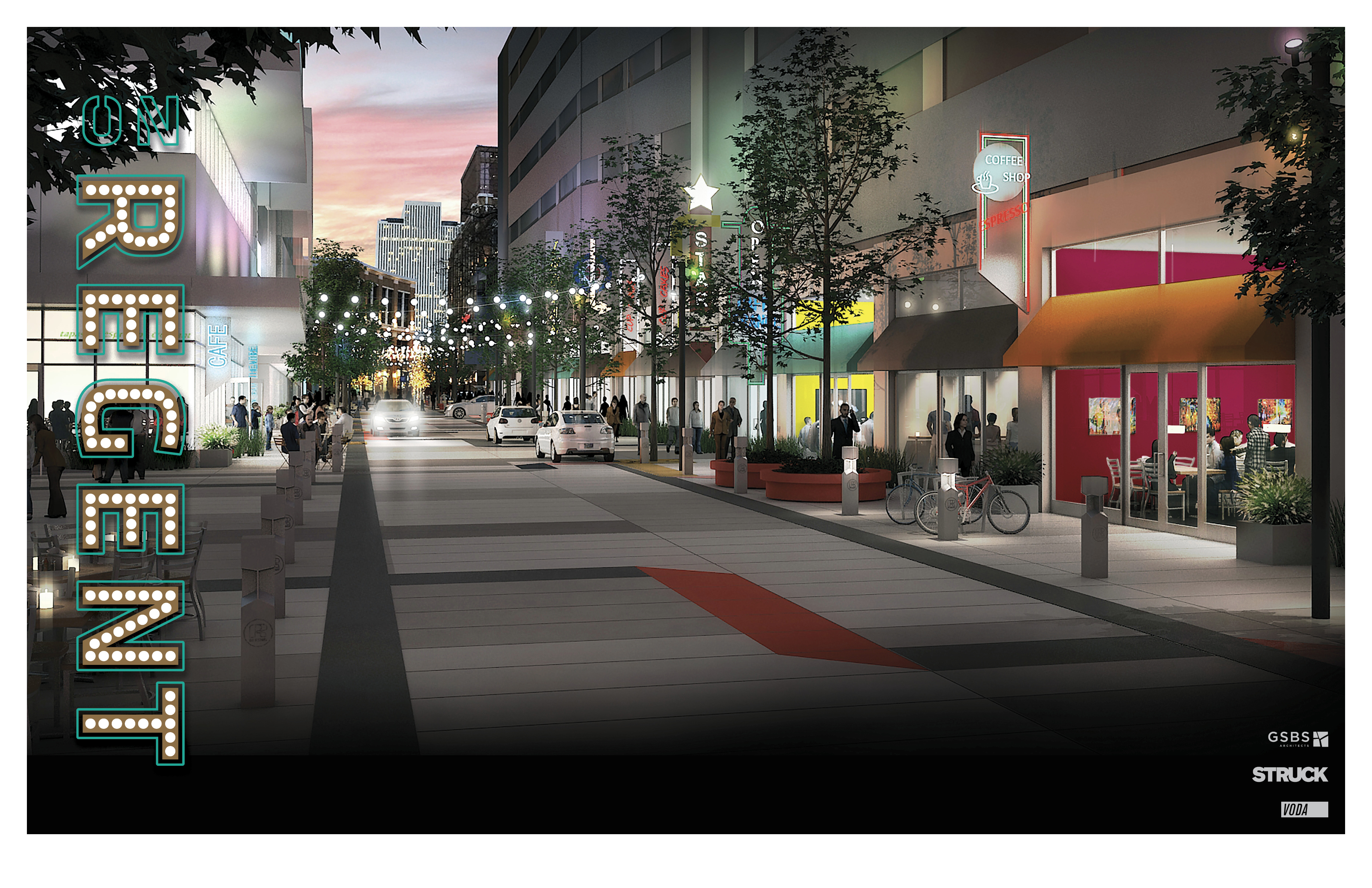 The Regent Street creative design team unveiled their schematic design for the Regent Street block between 100 and 200 South on Tuesday.  That same day, the creative team led by GSBS Architects, STRUCK agency and VODA Landscape and Planning presented their plans to the Board of the Redevelopment Agency of Salt Lake City, the city agency financing the project.

While the focus is on Regent Street, the larger plans for the block include street-level enhancements on Orpheum Avenue (a mid-block street connecting Regent and State Streets) and a pedestrian walkway connecting Main Street to Regent Street just south of Neumont University.

The overall theme of the design is a “street of stories” a reference to Regent Street’s storied history and the fact that the block was the long time home to the headquarters of Salt Lake’s two largest newspapers: the Deseret News and The Salt Lake Tribune.

The design team envisions a multifunctional street that includes a mix of retail, dining, public art and a public plaza.  The intent is to make Regent Street a destination that adds to the energy from the City Creek Center and the George S. and Dolores Doré Eccles Theater.

Construction of the first phase of planned improvements to Regent Street is expected to be completed at the same time as the Eccles Theater, by spring of 2016.

The design team has collaborated with the RDA to create the “Regent Street podcast,” a bi-monthly podcast that will “discuss the role of public art, urban design, architecture, city planning, economic development, branding, place-making and history in the transformation of Regent Street.”  The podcast will be updated twice a month and include the diverse stakeholders involved in recreating Regent Street.

Jesse Allen, a project architect for GSBS Architects, and Mark Morris of Voda Landscape and Planning sat down with Building Salt Lake to discuss the schematic design and the process of re-energizing Regent Street.

Building Salt Lake: What were your central objectives going into the initial planning phase?

Mark: In that initial process it was looking at these specific things we wanted Regent Street to be and what the overall message is we are sending. So much of it relies on private property owners to participate with the city. Struck (Struck agency) really helped in pitching some big ideas to the property owners.

Going into it, we just really wanted to make it an authentic interesting place for Salt Lake. We’ve got this big theater and all these other big draws around Regent. The city is invested in creating a diverse cultural core. This project is the first foray into extending that cultural core past City Creek Center and how you harness some of that energy into the surrounding blocks.

We are fortunate that Regent Street has the best interface with City Creek and is the most engaged at the street level.

Jesse: I think that this project is seen from the city’s perspective as an opportunity to try some stuff that they have wanted to try for a long time. The RDA sees this as the first of many midblock crossings that can activate the interior pieces of the blocks that have not been producing the tax revenues that they would like to see. Planning sees this as an opportunity to maybe develop a series of new standards for midblock crossings. I think everyone sees an opportunity here. We wanted to continue with the momentum that the city started.

Building Salt Lake: What challenges have you encountered in the design process?

Jesse: It seems like every day we learn more about another voice that has an opinion on what this thing should do. The challenge has been balancing the different voices and agendas.

Mark: It has easily been a hundred plus people that we have talked to, a bunch of people with different opinions.

Jesse: Regent has to still function like a street in the end so balancing this great creative energy with some complex issues with the street, it will take the whole team to make it work.

Mark: The property holders have been really dialed into this process. The property owners of Priority Dispatch (the former Deseret News building) changed the address of their building from 100 South to 110 Regent Street because they thought the Regent Street brand was cooler.

Building Salt Lake: How do you envision Regent Street interacting with the rest of downtown?

Mark: We still have the original sin of Brigham Young planning streets that are so hostile to human scale.  Cities historically were built at a very human scale.  State Street is always going to be this big auto sewer that will really only function to have cars moving through because of the width of the street. But, all these mid-block (corridors) have a human scale and the potential there is that these mid-block (corridors) could really become a place where downtown lives.  On Regent Street, the potential here is better to make this a more human-scale urban place.

They designed City Creek is such a way that they were intending to channel the energy outward; they divided those blocks up so well. This (Regent Street) is sort of an extension of that. If you improve these mid-block streets and there is more development around it, it changes the perception of what Salt Lake is. Right now Salt Lake is a place with wide streets and lots of traffic.

Jesse: A concern that is been voiced is that Regent Street has to compete with Main Street. With the pedestrian walkway between the two, it becomes one destination, which is Block 70. It isn’t something that cannibalizes Main Street, it enhances it. I think that the mission of the RDA is to be the first one into some of these places so that it will encourage private development.