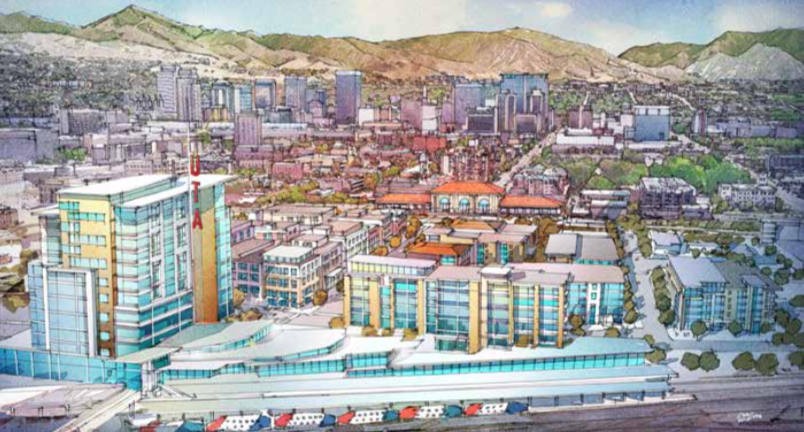 Salt Lake City could have landed it: One of the elusive technology company headquarters that are congregating in the sprawl of Lehi’s Silicon Slopes.

All the developer needed was permission to build high enough to suit the company’s desires, and a tech company would have come to the area near the Gateway.

That’s according to Stack Real Estate, whose founder told the City Council this week he had a fintech brand willing to place its headquarters in the city’s Depot District, if only the building could exceed the existing 90-foot height limit the city placed on the three-acre parcel and surrounding land.

The scenario surfaced an idea this week among the City Council: What if plans put in place just a few years ago for this transit-oriented neighborhood are already out of date?

The council will spend the next couple of months meeting with planning staff discussing that topic and weighing options for a part of the capital city that’s primed for redevelopment in the coming years for a number of reasons.

Among the central questions is whether it will abandon its approach of fading out the height from the core of Downtown, despite the possible benefits of more density abutting transit hubs.

The three-acre Stack Real Estate parcel puts a real example behind the question of the neighborhood’s future.

“We don’t want to miss another one of these, because they don’t come along every day,” said Nathan Ricks, managing partner of Stack Real Estate. “We need to come in and literally pull a permit because the zoning is already done.”

Ricks’ problem is that he says the company Galileo wanted to locate a building near Salt Lake City’s Station Center, the intermodal hub where the Redevelopment Agency and UTA own much of the land.

But the company wanted a taller building, closer to 190 feet. So it picked a different site, Ricks said.

The City Council placed the 90-foot height limit (120 feet with conditional permission from the city) in 2017, as part of an effort to transition from the city’s tall Downtown core in the Central Business District into surrounding neighborhoods.

Planners had picked 90 feet because 300 South in that area is about 85 feet wide (instead of the typical 132 feet in much of Salt Lake City). Buildings that are 90 feet tall along 300 South would frame the neighborhood at a near-1:1 ratio, which is supposed to give people at street level a feeling of being contained without overwhelmed by tall buildings.

“We love the festival street concept that’s already been approved [but] we don’t think buildings have to be exactly as wide as the street is,” Ricks said. “That’s not the case in the D-1 zone (Downtown).”

Buildings can be tall without being overbearing if the first 20 feet are inviting to street life, Ricks said.

In addition to asking to rezone the parcel to allow buildings up to 190 feet, Ricks’ team submitted ideas for what the entire block could look like if the council wanted to essentially master plan a city block.

The dream scenario included open space, to give a break from the added residential, retail and office density. It would include office towers ranging from eight to 12 stories, a seven-story hotel with 120 rooms, an eight-story residential building, brownstone units and a six-story parking garage.

That, of course, is a dream scenario. The RDA is the primary landowner in the area, and council members resisted making any final decisions on Stack’s request this week, opting instead to spend the next two or three months meeting with planning staff and considering possibilities for the area.

Now dubbed Station Center, the block west of the Rio Grande building is expected to be built on quickly after the state spent tens of millions of dollars relocating the city’s homeless population to other neighborhoods in the city and county.

Council members didn’t seem opposed to the idea, but withheld making a decision on a large piece of the block before having time to consult with planning staff.

“In my opinion, I’m not opposed to more density and higher height,” said City Councilwoman Amy Fowler, who is chair of the RDA board. “But there is some information we need to get.”