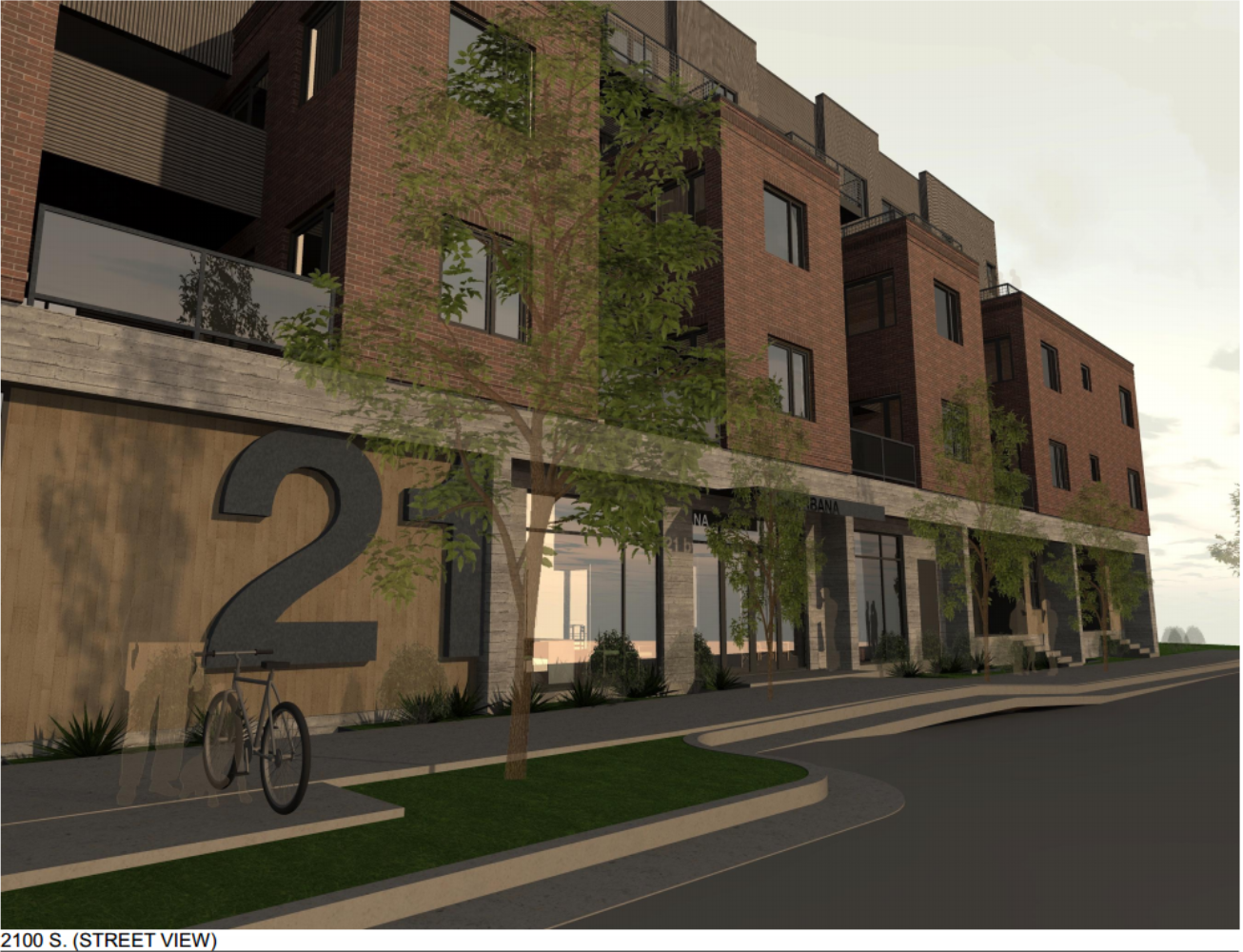 The apartment building boom in Sugar House continues.  Developers, Gardiner Properties, plan to build an residential development at 974 East 2100 South.  On Monday the 16, the developers and architects presented their plans Monday night to the Sugar House Community Council for comment on the project’s compliance with community design guidelines.

According to the developers, construction will begin this winter.  The project replaces the subway and Utah Idaho Supply.  The project, called 21 by Urbana, will be Gardiner Properties’ third development near 2100 South.  The developers built the Sugar House Apartments and the Urbana On Eleventh.

The building, designed by Lloyd Architects, will contain 126 units.  And will include 12 studios, 81 one bedroom, 24 two bedroom and nine walk-up (ground floor) units.  The lot is currently zoned for a high-density residential building.

Questions began before the presentation ended, and at times the exchange was contentious. Residents expressed concern about the effect the building would have on the neighborhood feel of Sugar House, citing additional traffic, the height of the structure, the lack of pass-throughs and the expense of the units.

“We aren’t going to have a business district because all the small businesses will be gone,” said a resident.

John Gardiner, partner of Gardiner Properties, cited his tenure as a resident and business person in the community in response.

“We live here, we work here, we shop here,” he said to the council.

Gardiner is working in partnership with the property owners, Dave Johnson and Jim Johnson.

According to planning documents, the facade is designed with a mix of cedar and formed concrete at street level, with metal panels and brick on the upper floors.  The facade of the sixty-foot building will be articulated with a setback at thirty feet.

One of the council members appreciated the design, telling the developers, “You did more than you needed to make it beautiful.” But some residents disagreed, voicing concern about the size and footprint of the building. One resident complained that the building was too close to the street, but the architects countered that the distance from the street is consistent with design recommendations for walkability.

The building will not be mixed-use, so in the absence of commercial spaces, apartments will be at street level. The architects indicated that while this housing type has not yet been seen in Sugar House, they are taking their design cues from Portland where such buildings have been successful.

The building will provide 137 parking spaces in an underground lot. Because the building is within a quarter mile of the streetcar, the required number of spaces is 76.5. Were it not for the mass transit deduction, the requirement would be 153. The developers will also make room on the street for additional parallel parking.

Several residents worried that parking in the nearby neighborhoods would become even more scarce, especially since the rental agreements will charge $50 for a parking space in the garage. They also complained that during the fifteen month construction period the workers would contribute to the parking squeeze.

The project will include seven bicycle spaces, as well as a room to lock up bicycles.

When asked about affordability, Gardiner referred to the word as synonymous with “government subsidies,” a definition that some residents objected to.  He indicated that the building would not provide low-income housing. The cheapest units would be $950 for a 400 square foot studio. There will be eight of those units. Citing the demand for housing in the area, Gardiner said that 95% of leases in their other complexes were filled.

The building was not designed for LEED certification, though the architects said that their choice of durable building materials was made with efficiency in mind. Gardiner said that he hoped the building would last a century or more.

The developers will need to go before the Planning Commission for a Conditional Building and Site Design Review before construction can begin.  Developers hope to start construction by October or November with expected completion in January or February of 2018.