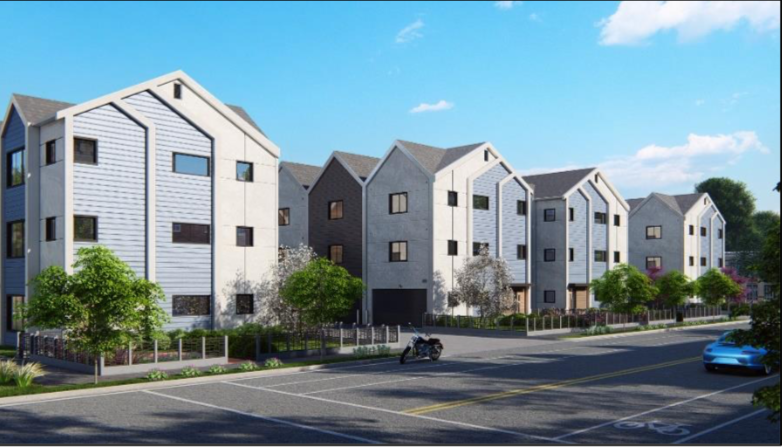 The rail yards stretch to the west and the oil refinery’s the neighbor to the north. At 800 North and 400 West, a sizable gravel mine’s just up the road.

That hasn’t stopped enterprising developers from carving out new sites from old light-industrial uses. It makes sense – given the neighborhood’s proximity to Downtown and stunning urban views of the Wasatch.

At 765 North 400 West, developers began a rezoning process in 2019 that yielded mixed-use (MU) zoning and, earlier this month, a planned development approval at the Salt Lake City Planning Commission.

With that unanimous decision in hand, TAG SLC will build 28 for-sale townhomes on .84 acres (33.3 units/acre), each with two bedrooms and two parking stalls, stacked in typical townhome vertical fashion.

The project will replace a vacant lot and a one-story office building with its surface parking lot at 765 and 775 N 400 W.

Developer Jordan Atkin from TAG SLC, a sponsor of this site, told the commission that “After engaging with some of the neighbors, we decided to go with a for-sale townhome product.”

The application asserted that approving the planned development would enable a financeable, “attainable,” missing-middle ownership housing option – something currently in short supply in the Salt Lake City market.

The project will have shared ownership of its open spaces, like sidewalks, which will be managed by an HOA.

Just to the east, the neighborhood has long been in the sights of the city’s Redevelopment Agency and the nonprofit NeighborWorks. Reed Ave – in the aerial photos above – between 300 and 400 West, has recently seen significant investment in “missing middle” residential development.

This, despite being pinned in by industrial-scale streets like 300 + 400 West and 600 North, designed to carry heavy truck traffic.

The immediate neighborhood clearly has assets – among them Warm Springs Park, nearby access to the Bonneville Shoreline Trail, and a trendy watering hole, The Handlebar. We will see whether it can grow a residential base with its current state of industrial-scale transportation and land use design.