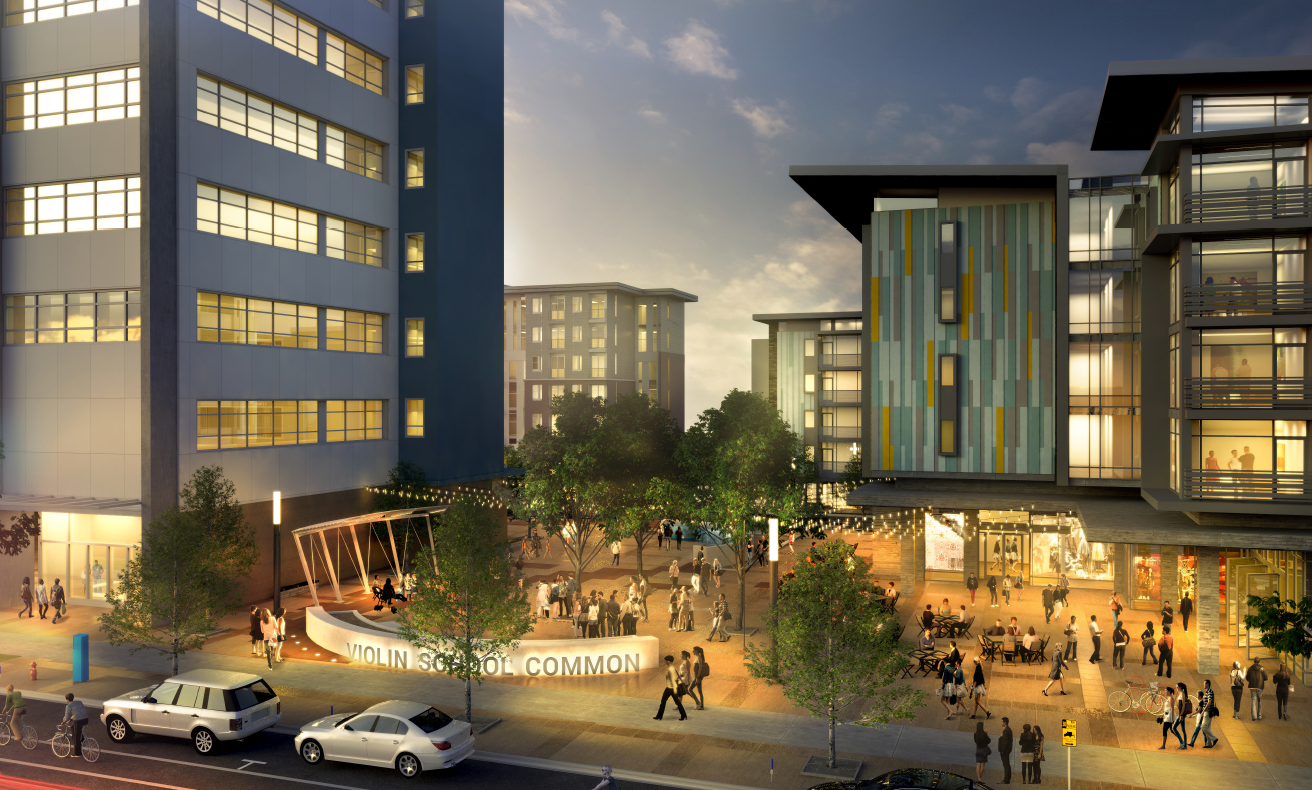 It’s been over a year since Salt Lake City officials selected Cowboy Partners and Form Development to redevelop the site of the former Public Safety Building at the northeast corner of the 200 South and 300 East intersection.  Things have been quiet since the city first revealed the developer’s final plans for the project, referred to as the Violin School Commons, early last year.

On Wednesday, Chris Zarek of Form Development presented the current plans for the project to residents during the Central City Neighborhood Council’s monthly community meeting.  Zarek reassured residents that despite the lack of construction crews on site, the Violin School Commons development is still moving forward as Cowboy and Form Development work to secure housing and tax credits to help finance the project.

The project potentially qualifies for a myriad of housing and tax credits including affordable housing credits and historic renovation tax credits.  Cowboy and Form plan to build two new construction mixed-use buildings and restore the historically protected Northwest Pipeline Building that will be rebranded as the Metropolitan Building.

“The building was really the first attraction to the project, we have a lot of admiration for that building,” said Zarek.  “We are excited about what we can do with some rehabilitation to bring that building back to life.”

The three buildings will add a combined 248 residential units that will serve a range of income levels, from market rate to supportive housing.  The two new construction buildings will be five and six stories respectively, ensuring that the nine-story Northwest Pipeline, or Metropolitan building, remains the most visually prominent building.

According to Zarek, the developers designed the project around the concept of placemaking and neighborhood identity with the nod to the adjacent Violin Making School with the Violin School Common, a half-acre plaza at the center of the development.  The developers will also reintroduce Arnold Place, a historic street that used to bisect the block that will connect residents to the parking structure.  Zarek told residents that his team designed the street in a way that it can be shut down for events like street festivals and serve as temporary public space.

The common be privately owned but will be open to the public and activated by ground floor commercial and public uses.

“The emphasis for all of it is to create a neighborhood anchor for that part of the community,” said Zarek.

Liberty Uptown will have 109 mixed-income units and will wrap around a parking structure that will serve all three buildings.  Liberty Uptown will include 4,500 square feet of ground floor commercial space with a mix of studios, one and two-bedroom affordable and market-rate units.  The affordable units will be reserved for residents earning between 25 to 60 percent AMI (Area Median Income).

The Magnolia will have 65 unit permanent supportive housing units with 1,500 square feet of commercial and social enterprise space.

Most residents attending Wednesday’s meeting responded favorably to the project with several referencing the mid-block walkway, open space and the restoration of the former Northwest Pipeline building as positives features of the project.

The developers will start construction once the project is fully financed.  According to the developer, one obstacle to obtaining tax credits has been the Utah Housing Authority prioritizing TOD (transportation orientated developments) mixed-income housing projects over permanent supportive housing, making it more difficult to secure credits for the Marigold building.