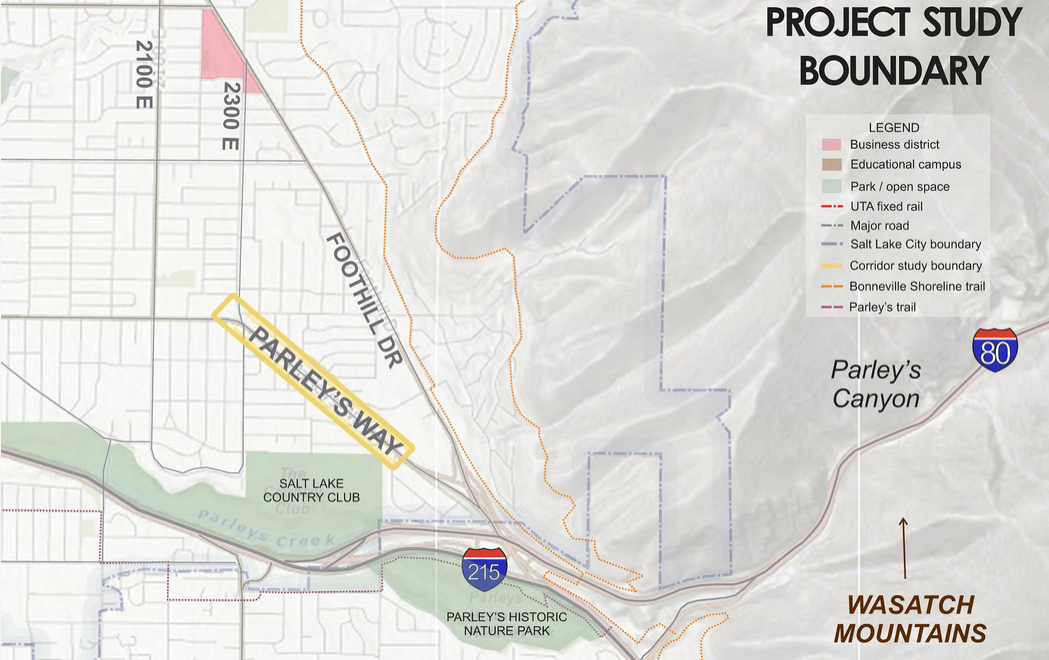 Parley’s Way is a street for cars.  As a gateway into Salt Lake City, Parley’s Way is one of the City’s busiest throughways.   The Corridor connects Salt Lake’s East Bench and Sugar House neighborhoods to Parley’s Canyon and Interstates 80 and 215.

“We are hearing from people that there is a safety issue for bikes and pedestrians on Parley’s,” said Wayne Mills a senior planner for Salt Lake City. “There is a speed issue, Parley’s gives you the feeling that you can drive fast.”

The wide traffic lanes, few traffic lights and that fact that Parley’s Way connects directly to the interstate makes the street feel for like a highway than a neighborhood throughway.  According to Mills, a new design should remind drivers that they are in a neighborhood by including amenities that give a sense of place and a neighborhood identity.

The City’s Planning Division is turning to Open City Hall to gather public feedback to shape potential improvements in the Parleys Way Corridor Plan. The project area includes Parley’s Way from Foothill to 2300 East.  The plan looks at the best ways to enhance the safety, efficiency and aesthetics of the corridor for pedestrians, cyclists, drivers and transit riders.

Participants will have the opportunity to weigh-in on four focus areas:

The final design for Parley’s Way will attempt to break down the barrier feel of the corridor while increasing connectivity and making the corridor more hospitable to multiple uses.  The traffic lanes on Parley’s Way are wide enough that a protected bike lane could be added while maintaining the current number of lanes.  Accommodating mass transit will also be included in the final proposal.  Currently, the only transit on Parley’s Way is a commuter bus to Park City.

The City recently completed a similar project on 300 West in the Marmalade neighborhood.  Like Parley’s Way, 300 West is a gateway to the City with safety and speed issues.  The City installed orange colored crosswalks to increase visibility and planted trees in the street medians to remind drivers that they are in a residential neighborhood.

But unlike 300 West, which is a state road managed by the Utah Department of Transportation, Parley’s Way is owned by the City and which will make any changes easier to implement because the City has direct control of the street.

As of Friday, May 8, there have been 179 responses to the Parleys Way Corridor Plan on Open City Hall.

Residents can participate in the Parley’s Way Corridor Plan survey by visiting www.slcgov.com/opencityhall.

What would you like to see done to Parley’s Way?  Leave your ideas in the comments section below.