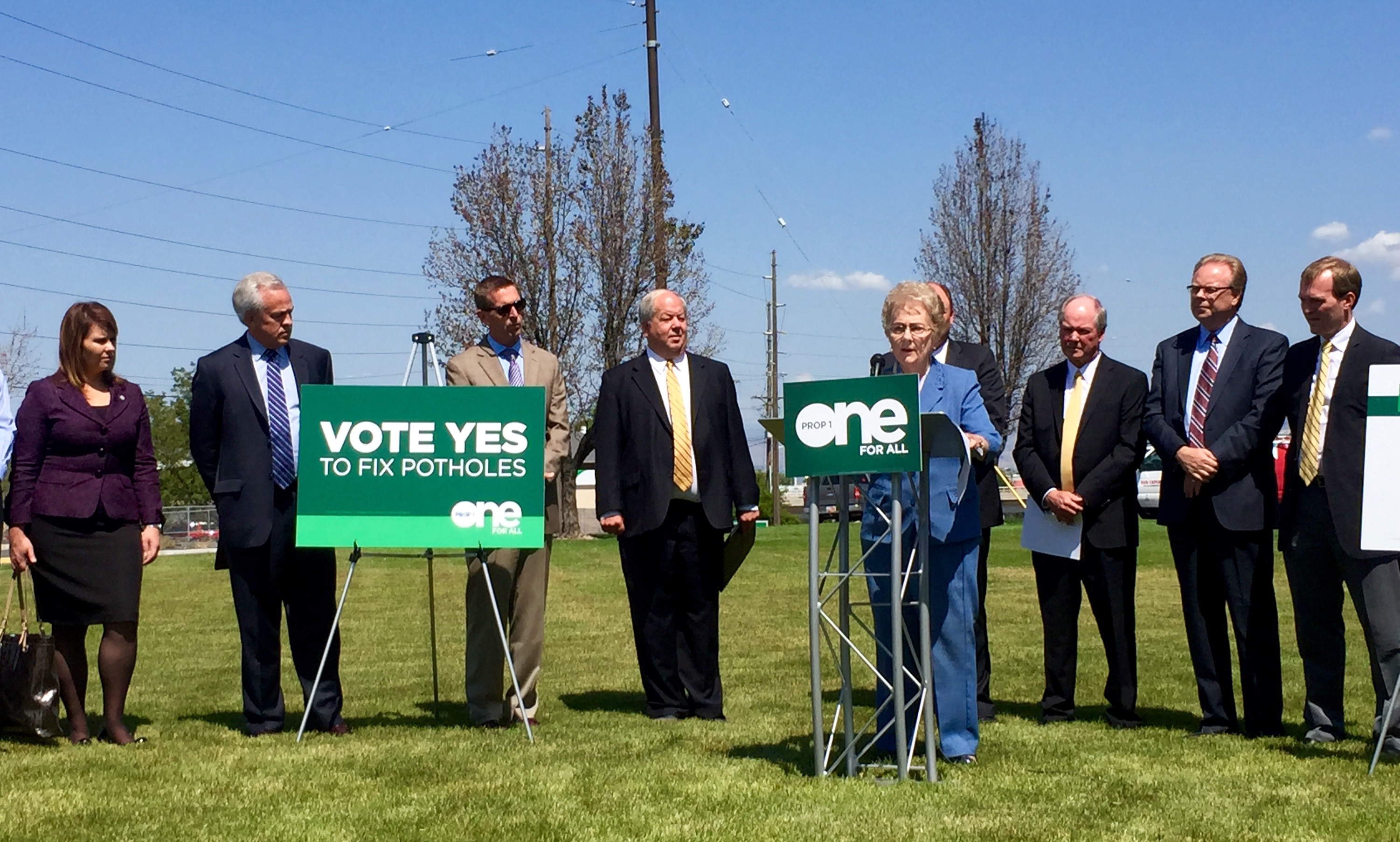 *This article has been updated to clarify the role of the participants of the Thursday media event.

Since local governments and government agencies can’t actively campaign for Proposition 1, a local option sales tax for transportation funding, local leaders are turning to education campaigns to inform residents of the potential impact of new revenue to pay for various local transportation needs.

Several business leaders and city mayors joined McAdams on the front lawn of Midvale City Hall for a Thursday lunch hour news conference for the official launch an education campaign, “Prop 1: One for All,” which will use advertising, social media and grassroots outreach to educate voters on the sales tax option that will be on November’s ballot in sixteen Utah counties.

The event was organized by the public issues committee (PIC), Utahns for Responsible Transportation Investments, spearheaded by the Salt Lake Chamber of Commerce.

If approved, residents would pay 0.25 percent more in sales tax, or one penny for every $4, that would go towards local transportation needs including: local roads, bus service, trails and sidewalks.  Forty percent of the revenue from the sales tax increase would be allocated to local municipalities, with the counties receiving 20 percent.  The remaining 40 percent would go to the Utah Transit Authority.

The UTA’s Board of Trustees recently approved a resolution stating how the agency would use the potential new revenue.  Under the resolution, if Prop 1 passes, residents can expect to see more buses with “increased frequency, service hours and weekend service.”  The Board also stated that funds would be used to make transit more accessible to riders through “first and last mile solutions like trails, biking and sidewalk facilities to help connect riders to transit, bus stop shelters and other amenities.”

“We have growth coming,”said Orem City Mayor Richard Brunst.  “The way people get around has shifted over the years.  We need options.”

“In Utah we don’t play catch up, we lead,” said McAdams.  “Transit benefits those that don’t even ride it because it reduces the number of cars on the road.”

The tax watchdog group, Utah Taxpayers Association, criticized the potential new tax and Salt Lake County’s decision to put the proposition on the ballot in a non-general election year, despite a county ordinance that prohibits such votes in off years.

But for Salt Lake City leaders, the timing of the Prop 1 vote is auspicious.  City leaders are currently developing the City’s first ever Transit Master Plan.  The Transit Plan is still in the research and public feedback phase, but the final draft is scheduled for completion just after November’s Prop 1 vote.

Salt Lake City planners anticipate the City to gain 40,000 new residents and 20,000 more employees by 2040.  A report released over the summer revealed that the City has transit service gaps in the current system, including: infrequent bus service, insufficient service hours and portions of the City with limited or no access to mass transit.

The City wants to increase the hours of service, the number of buses and include more local high-frequency routes to better connect its neighborhoods and accommodate residents that work outside of the traditional, 9-5 work schedule.

Earlier this month, UTA extended weekend TRAX hours and S-Line hours while increasing the frequency of several bus routes, including Route 220 that runs through Salt Lake.

“We should have good bus service throughout the county with short wait times, 15-minute frequencies, and Prop 1 will help us get there,” said Midvale City Mayor JoAnn Seghini.