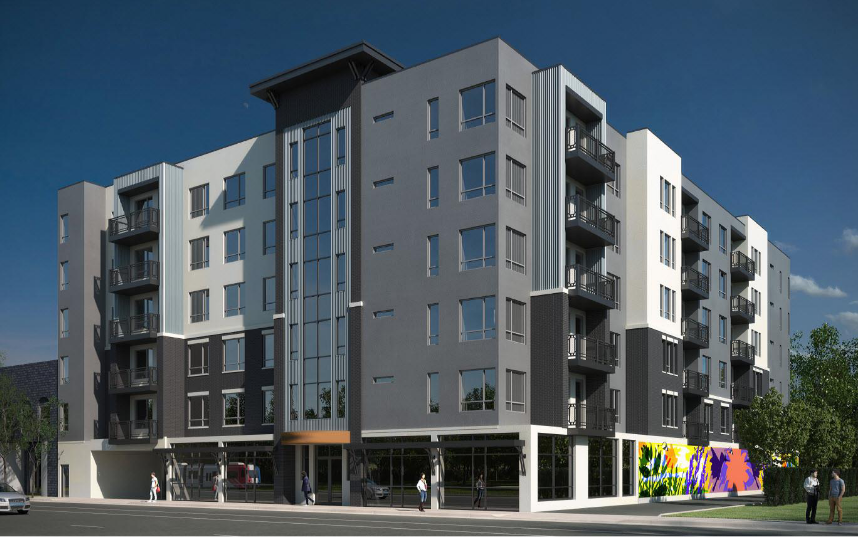 At 200 South and 600 West, a key axis of Salt Lake City’s west Downtown, only one corner has an active use.

The Depot District warehouse best known as Bricks club, on the southeast at 579 W 200 S, was an LGBTQ-friendly space with independent live music. It was also known as Club Sound and In the Venue.

This will be the first corner to be redeveloped.

In good news for affordable housing advocates, Gardner-Batt and Architecture Belgique are building a 65-unit project that mirrors its (currently under construction) “sister” building just to the east – with 52 of its units pegged at 25-50% AMI. The other 13 will be market-rate, in an area that is claiming some of the highest rents in the city.

The project is under planning review at city hall.

It will offer studios through 4-bedroom units, 80% of which will be meeting housing needs for people making 50% or under of AMI. Known as “deeply affordable” the project’s units are the result of 9% tax credits awarded in December 2019 to Gardner-Batt.

The developers are asking for some exceptions to code requirements on exterior building materials, commercial ground floor uses, and prohibitions against ground floor blank walls over 15 ft.

Project lead Eric Balls of Architecture Belgique states in the application that the first-floor residents-only fitness room and leasing office would meet the intent of the zone’s ground-floor commercial requirement for 200 South, a street explicitly called out in the code.

Balls writes, “The fitness area located on 600W would appear as a gym, the leasing office and lobby appear as commercial office space, and the clubroom with kitchen and fireplace can appear as a higher end restaurant.”

The blank wall on 600 West, necessitated by the design of the parking podium, is proposed to be mitigated by a 115 x 9 ft mural, meant to pair with similar artwork at Central Station East.

“We look forward to your consideration and approval of this project in its current form,” Balls concludes his statement to the city.

The project is on its way to the planning commission, currently taking comments in the open house stage.