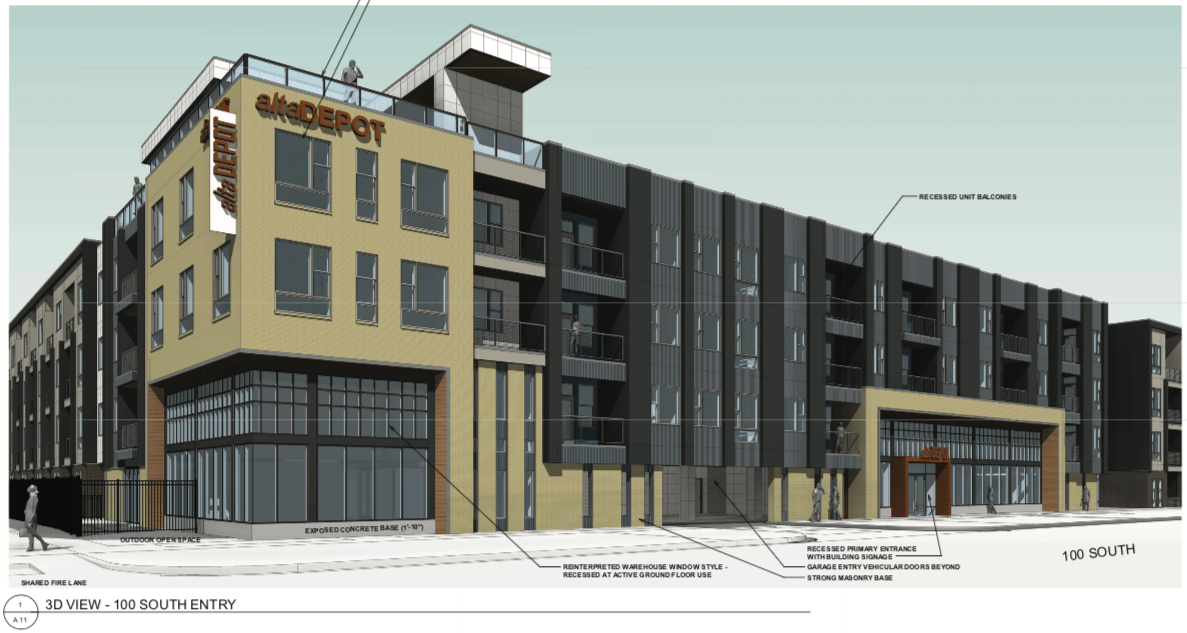 The residential explosion in Salt Lake City’s Depot district continues, with a 288-unit market-rate rental project at 100 South and 600 West in the queue for design review at the planning commission.

Alta Depot, by Wood Partners and Studio PBA architects, based in Denver, are petitioning for exceptions to city rules on external materials and parking maximums in the G-MU Gateway-Mixed Use zone.

At 565 West 100 South, Alta Depot’s four stories will sit on 3.39 acres, currently a vacant lot (just to the north of Casa Milagros at Centro Civico Mexicano) and a large garage.

The architects have fully wrapped the four levels of parking with residential units, and boast that “almost every residential unit…will have its own private outdoor patio or balcony.”

As required by the zoning, the project will provide a segment of an east-west midblock walkway, as well as a north-south fire access alley.

The developers are asking for relief from the zone’s requirement that 70% of building exteriors must be “masonry, textured or patterned concrete, and/or cut stone.” The architects want to work with corrugated metal more than the G-MU regulations allow.

G-MU zoning also controls how much parking can be provided: .5 stall per unit. The developers are asking to build 385 stalls for the project’s 288 units, a 1.3 stall per unit ratio.

Created in the 1990s, the G-MU district was the city’s first attempt to zone for a mixed-use, walkable, urban environment outside the D-1 zone.

The opportunity was provided once the city’s Redevelopment Agency succeeded – over decades – in opening up the railyards in the Gateway district west of Downtown. Planners aspired “to create an urban neighborhood that provides employment and economic development opportunities that are oriented toward the pedestrian with a strong emphasis on a safe and attractive streetscape” (from the purpose statement in the code).

Seemingly reacting against the monolithic, modernist architecture that ruined the pedestrian experience on many Downtown blocks in the 1960s, 70s, and 80s, the G-MU zone requires a 40% glass coverage at the street level. Not surprisingly, given its origin nearly 30 years ago, there are no requirements for ground-floor active use or retail.

Building facades may be greater than 200 feet if not monolithic, “smooth” exteriors, and only one entrance per facade is required.

G-MU requires buildings be at least 45 ft tall with a 75 ft maximum, up to 90 ft if the building is mixed-income.

Just a block south of the Alta Depot site is the heart of the Depot district, adjacent to UTA’s Central Station, where G-MU zoning was recently challenged by developers wanting to build higher. The city council seemed intrigued by the notion of increasing heights outside the D-1 zone, and agreed in principle for the planning department to do a “height study.”