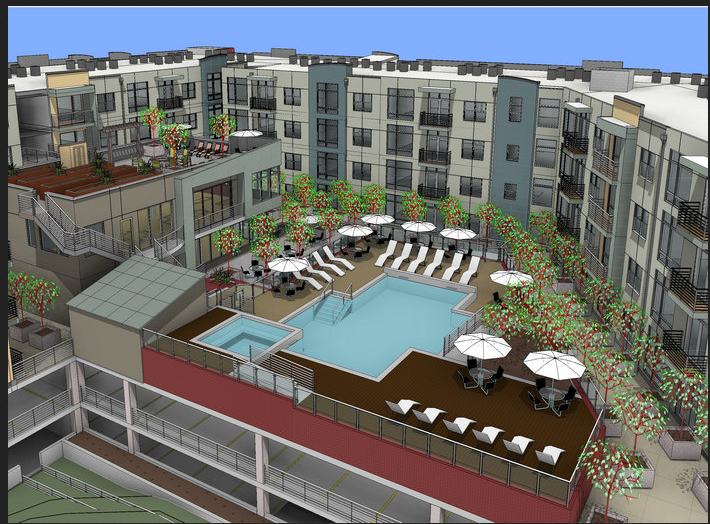 The neighborhood around Brickyard road, the southernmost corner of Salt Lake City, is an area long dominated by strip malls and surface parking lots.  The Ritchie Group plans to change that with the Element31 Apartments, a surprisingly dense mixed-use development that will be built next to the Brickyard Tower office building at 1245 Brickyard Road.

The $28 million mixed-use project will consist of 208 Class-A apartment units and retail space.  The apartment complex will include underground parking, a swimming pool and fitness center.

Element31 Apartments were originally planned as condos when the project was first proposed in 2012.   Financing for condos is more difficult to obtain and with apartment vacancies in Salt Lake at 4 percent there is a growing demand for apartment units in the city.

Brickyard road currently consists of an aged strip mall, the Brickyard Plaza, and a Harmon’s Grocery Store. The Brickyard Tower is located on the north side of Brickyard road directly across the street from the plaza.  The plaza, office building and a large rear parking structure were built in the early 1980’s.

Element31 Apartments will be six stories tall, complementing the Brickyard Tower’s seven floors.  The project maximizes lot space by building right up to neighboring lot lines.  The project will have four floors of residential above two floors or parking and will wrap around the sides and rear of Brickyard Tower. The office’s buildings original parking structure has been demolished and is being replaced with the three-level underground parking garage.

The Element31 Apartments will create a density in the neighborhood, typically only found around Downtown.   The project’s mix of residential and retail, along with office space at the Brickyard Tower, will make this development a truly mixed-use space.   Hopefully the project’s urban design and reuse of an aging parking structure will inspire the owners of Brickyard Plaza across the street to redevelop the plaza’s large surface parking lot into something better suited to its surroundings.

Construction should be completed sometime next year.  While not technically a transit orientated development, bus routes 220, 213 and 33 are within a block from the project.