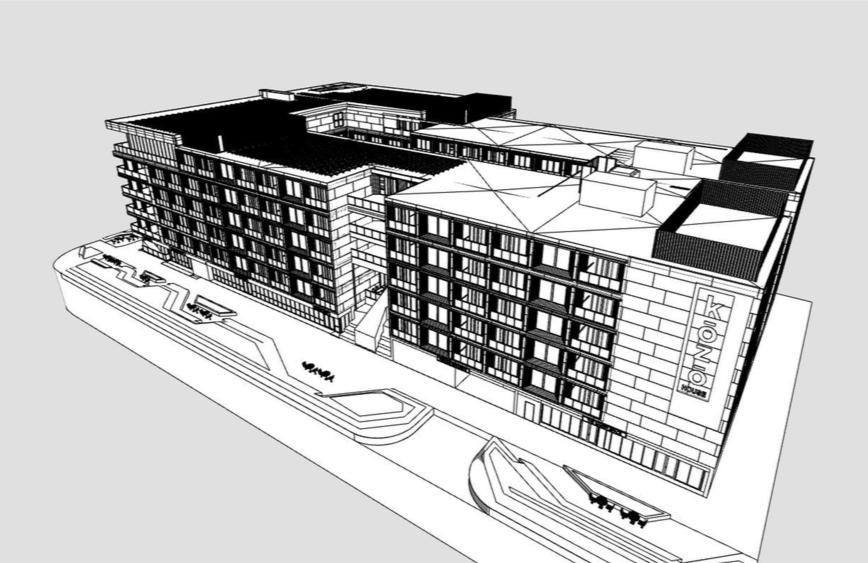 The North Temple Bridge-Guadalupe community is about to get a sizable new member. At 200 North and 600 West, Modal Living is proposing a 356-unit, mixed-use, all-studio, podium-plus-five building called Kozo House.

The dorm-style development’s units are all 378 sf studios, in addition to 28 ADA studios at 448 sf. The building will include both co-working and makers’ space as amenities – including a full run of luxury features like BBQs, hot tubs, saunas, yoga and massage rooms.

At street level, the project offers 5650 sf of retail/restaurant/office space, plus 1855 sf of “basement tavern space.”

It will be parked with 139 stalls, in our count, a .39 stall to unit ratio – one level underground and one at ground level.

This low parking number, along with high scores for items like external materials, eyes on the street (lots of balconies), energy efficiency, and ground floor uses, scored the project (according to the developer) at 302 points – well over the 125 required to avoid planning commission review.

The project’s sticking point? It needs design review from the planning commission for its facade length on 200 North, which exceeds the zone’s 200 ft maximum.

The developer’s case is based on the building’s break in the facade on 600 North. The stairs lead to a “publically accessible work terrace and stair to a private amenity courtyard. The stairway access to the private courtyard will double as a publically-accessible pocket park with trees, plantings, and seating areas for users from the adjacent ground-floor retail, grocery, and makers space.”

It sits on the northern edge of TSA-UC-T Transit Station Area-Urban Core-Transition zoning, across the street (200 North) from single-family and triplex zoning.

600 West is the spine of the Guadalupe neighborhood that originally emerged adjacent to the railroad, and later was cut in two by I-15. Just east of the Jackson neighborhood, Guadalupe has seen steady incremental redevelopment in recent decades largely due to the non-profit developer Neighborworks Salt Lake, which has constructed and rehabilitated dozens of homes in the neighborhood.

Modal Living’s TSA performance-zoning score was also bolstered by its commitment to street-front engagement. The project’s site, the SW corner of 600 West and 200 North, promises to be blessed with a variety of public seating, including cafe tables + chairs, concrete seat-walls, and basalt rocks suitable for sitting.

The project is on the Planning Commission’s December 2 agenda.