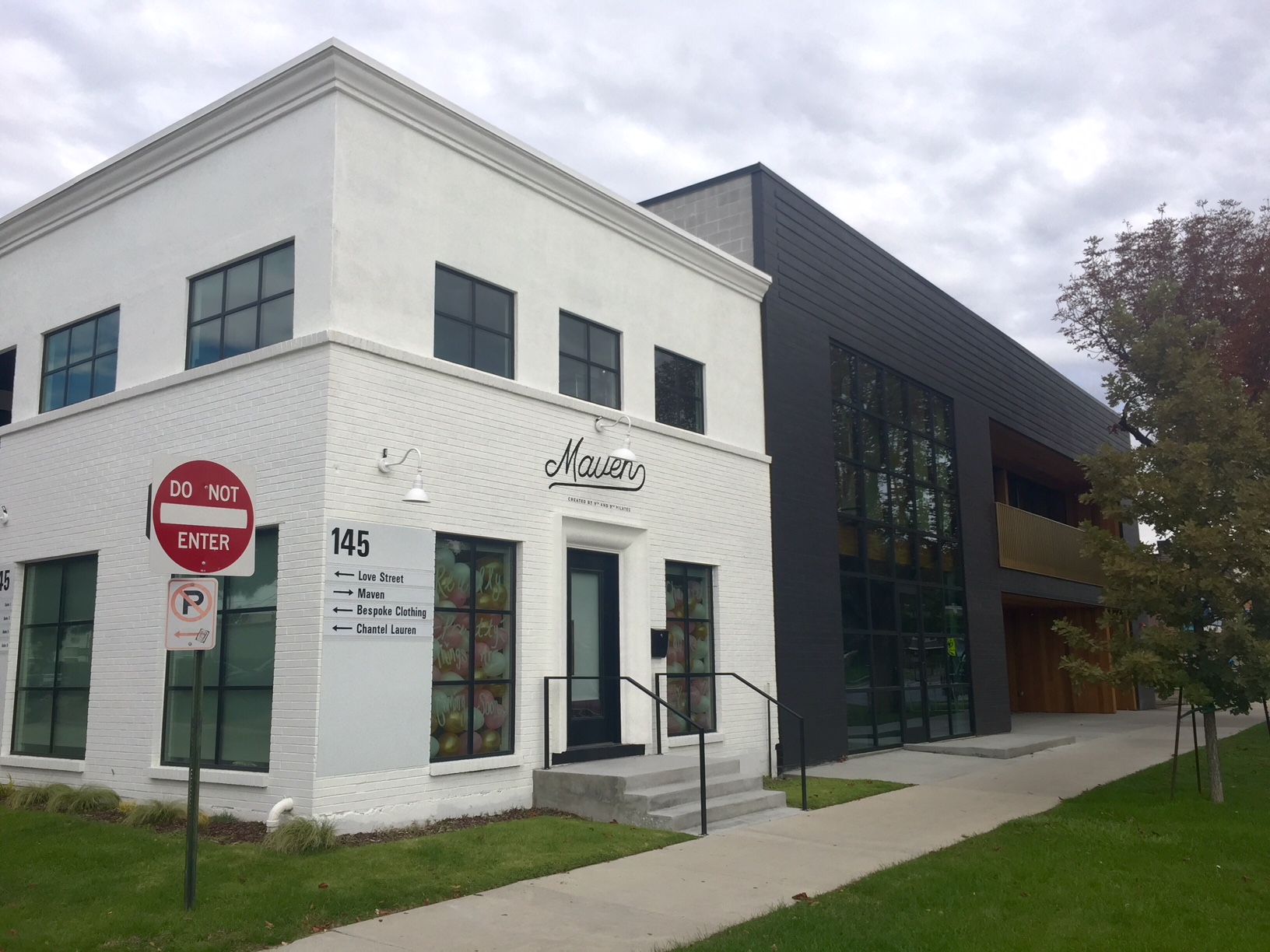 Nestled halfway between the 9th and 9th and Central 9th neighborhoods, two of the most popular in the city, the 100 East block of 900 South is not an area usually on the radar of developers.  But for couple and development team, Tessa Arneson and Tim Watcke, the block has the potential to be another key activity node on 900 South with the development of the Maven District, a newly opened lifestyle and wellness center between Edison Street and 200 East on 900 South.

“We want to almost create a mini 9th and 9th here,” said Arneson.

Arneson, a wellness instructor, has experience in the 9th and 9th neighborhood as the owner of the 9th and 9th Pilates studio.  With help from her partner Watcke, a general contractor, they have sought to bring in an eclectic mix of local business to the Maven District.

The Maven District consists of a combined 25 leasable commercial units in three of the four buildings on the block, two of which were renovations and one, two-story new construction building. The new construction building replaces a vacant parking lot and is the district’s anchor building, consisting of two brands, Maven Strong, a rebranding of 9th and 9th Pilates, and Maven Wellness, a mix of businesses that focus on health and wellness.

Both Maven Strong and Maven Wellness will occupy the second floor with dining space on the ground floor.  The couple has leased one of the two available dining areas to Provo-based Chip Cookies.

All but two of the 13 leasable office space in Maven Wellness has been leased.  Tenants of the space range from Family Doctors to Beauty Salons to Massage therapists.

The two-story white building on the on the corner of the Edison Street and 900 South intersection was part of the Maven District’s first phase and houses mostly local apparel companies.  The white building’s storefront space had been used as a fitness area for Maven Strong but will become storefront space for wedding dress designer and manufacturer, Chantel Lauren.

The couple also converted the one-story office building directly east of Randy’s Record Shop (the one building on the block that they don’t own) into a retail center with improved activation by opening up the exterior facade at the street level.  New tenants of the building include Jed’s Barbershop and the first brick and mortar space for Normal ice cream, a popular local ice cream truck.

“We believe in neighborhoods being walkable, cool and filled with local entrepreneurs,” said Arneson.  “We’ve wanted to fill this block with businesses that work together with a cohesive mission.”

The next phase of the Maven District includes 25 townhomes at the site of Article Circle on the northwest corner of the Edison Street and 900 South intersection and the renovation on the H&R Block building at the corner of 200 East and 900 South.  The building’s current tenants will remain including H&R Block but the street front portion of the building on 200 East will be opened up at the street level and will be converted into three leasable commercial office spaces.