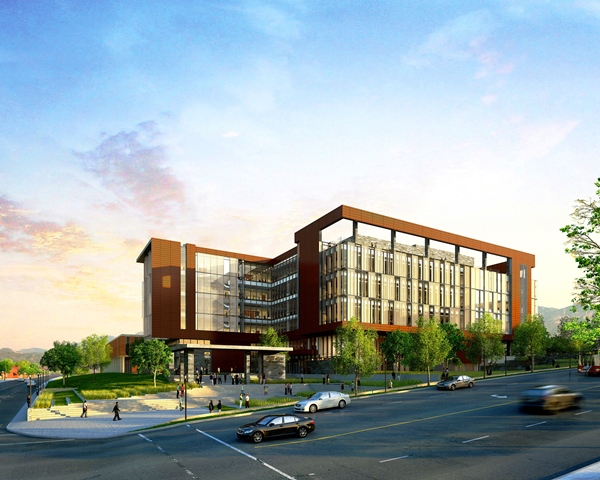 Construction of the University of Utah’s new S.J. Quinney College of Law has progressed significantly since construction started last year.  The building has topped out and appears to better engage with the street and add more density to the area, then was originally conveyed in the renderings.

The new headquarters for the state of Utah’s only public law school, is directly across the street from the Stadium TRAX station at South Campus Drive and University Street.

The new law building replaces the older building next door.  At 50 years-old, the current facility was no longer meeting the laws schools needs.

According to the University of Utah the new building will include:

The five-story, 155,000 square foot structure has almost no setback from the sidewalk, creating a very dense urban feel to a heavily used transit corridor.   The open design of the first floor helps with street engagement.  The University of Utah intends for the new building to be apart of the neighborhood and will include both a ground-floor cafe and coffee shop that will be open to the greater community.  The project also includes a 450-seat conference center that will be used for university and community events.

Large windows on each floor will allow light from all directions to enter the building, helping to lower energy use.  The windows are solar-screening low-emissivity and insulated glass which will help regulate the indoor temperature.

The University of Utah has identified the area surrounding the Stadium TRAX station as an important transit node for the school.   Under the current master plan, the university plans to make the main campus more urban by making the university more compact with larger buildings taking up less space,  improving bicycle and pedestrian access and by building developments around each TRAX station that encourage ridership and make each station a better gateway to campus.

The Stadium TRAX station serves as the main gateway into the university, but currently riders must cross through a large parking lot to get to the main campus.  The station is heavily used by students and university staff and patrons of events at the adjacent Rice-Eccles Stadium.  The school has considered building housing and retail adjacent to the station to make that corner of campus more pedestrian friendly and to break up the large parking lot that separates the station from the school.

The new law school building should help make the stadium area more walkable and when finished could provide the momentum needed to further develop the area surrounding the Stadium TRAX station.

Construction is expected to completed late summer of 2015.