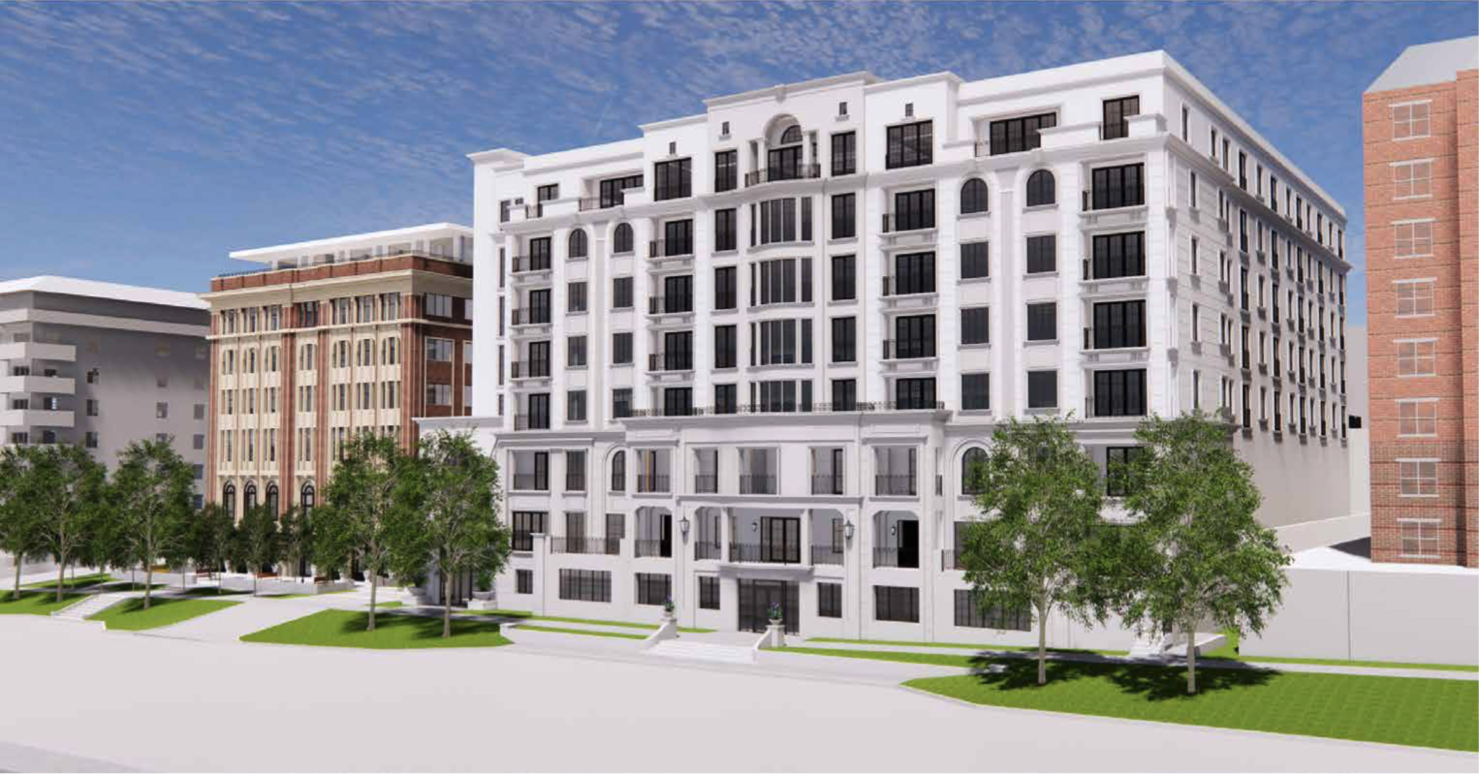 If it can get approvals to demolish a contributing home in a historic district and approval for additional height, the LDS Church plans to rehab several existing structures and build a new eight-story residential building among its long stretch of properties Downtown.

The new residential building would replace a parking lot on the north side of South Temple, immediately west of the church-owned Brigham Apartments.

With the necessary approvals, designers for the church say they would erect a building of what appear to be high-end apartments Downtown, filling an existing gap on South Temple while creating a new one on 1st Avenue.

“This new residential building is designed in a classic character that is refined in its level of detailing to raise the level of elegance that will create a distinctive street presence along South Temple boulevard,” the designers wrote.

The concrete and steel building would be wrapped in white stucco, contrasting the red brick that dominates the neighborhood, including numerous LDS-owned buildings and apartment buildings.

The church also owns the Brigham Apartments, Eagle Gate Apartments, Elks Lodge Building along the north side of South Temple, along with several homes and more apartments on the south side of 1st Avenue.

More details on the plans

The main new residential building will be in an L-shape, with parking hidden from street view. A two-story townhome building will enclose the parcel, fronting the Elks Lodge Building to the west and concealing a pool for residents.

The main building would have a mix of 87 units ranging from studio to three-bedrooms. Available documents don’t mention conceptual rents or timelines for construction.

The church representatives suggest they need to demolish the home to create fire access.

“Given the current fire codes, and the desire to create safe living and working environments Downtown,” they say, “the vacant parcel and the Elks Building won’t likely be redeveloped without Fire Department access to the north portion of the properties.”

In their application, they call 1st Avenue “a major arterial street” and note the home they seek to demolish is nearly 100 years old. (The street is actually classified as a local street. South Temple is a city arterial. The home was built in 1945.)

The proposed demolished home would make way for a new 20-foot wide driveway running from 1st Avenue between the rehabilitated homes and updated parking garage.

The available documents don’t detail the rehabilitation of the Elks Building or parking garage.