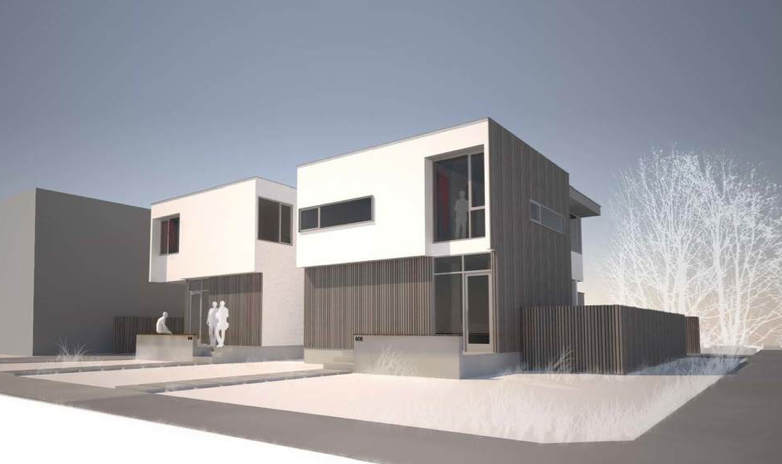 In the Central City neighborhood a lot of new projects are under construction along the 400 and 500 South corridors.  The neighborhood benefits from its proximity to downtown, the University of Utah and Liberty Park.  While the larger projects are focused around the TRAX line at 400 South,  smaller infill projects are emerging in the area between 600 and 900 South.

On the corner of 400 East and 900 South, adjacent to the Southeast Market, construction of a two-story building called Nic-Mi Office is underway.  The project will be a mixed-use building that includes ground floor retail and office space on the second floor. The retail portion has zero setback from the sidewalk, directly engaging the street-level.

According to Ryan Robinson, the construction manager on the project, the office space is being built to accommodate two business or be consolidated into one large space while the the ground-floor space will either be a restaurant or commercial retail business.  The owner is currently looking for tenants and the final designs for the ground floor will be based on the type of tenant that is leased.

Like the Nic-Mi Office building, the Gin & Tonic House, two town-homes on the corner of  400 East and 600 South in the Central City area, will be two stories tall.  The homes will each be just under 2,000 square feet and include a one-car garage. The town-homes are being sold through Kirkham Real Estate.

Both projects feature an modern, urban design that engages the street level.  The modern town-home style of the Gin and Tonic houses and the mixed uses of the Nic-Mi Offices shows that the city is moving away from large detached homes and single-use projects, even in the smaller scale developments.

Construction of both the Nic-Mi Office and the Gin and Tonic houses is expected to be completed early next year.