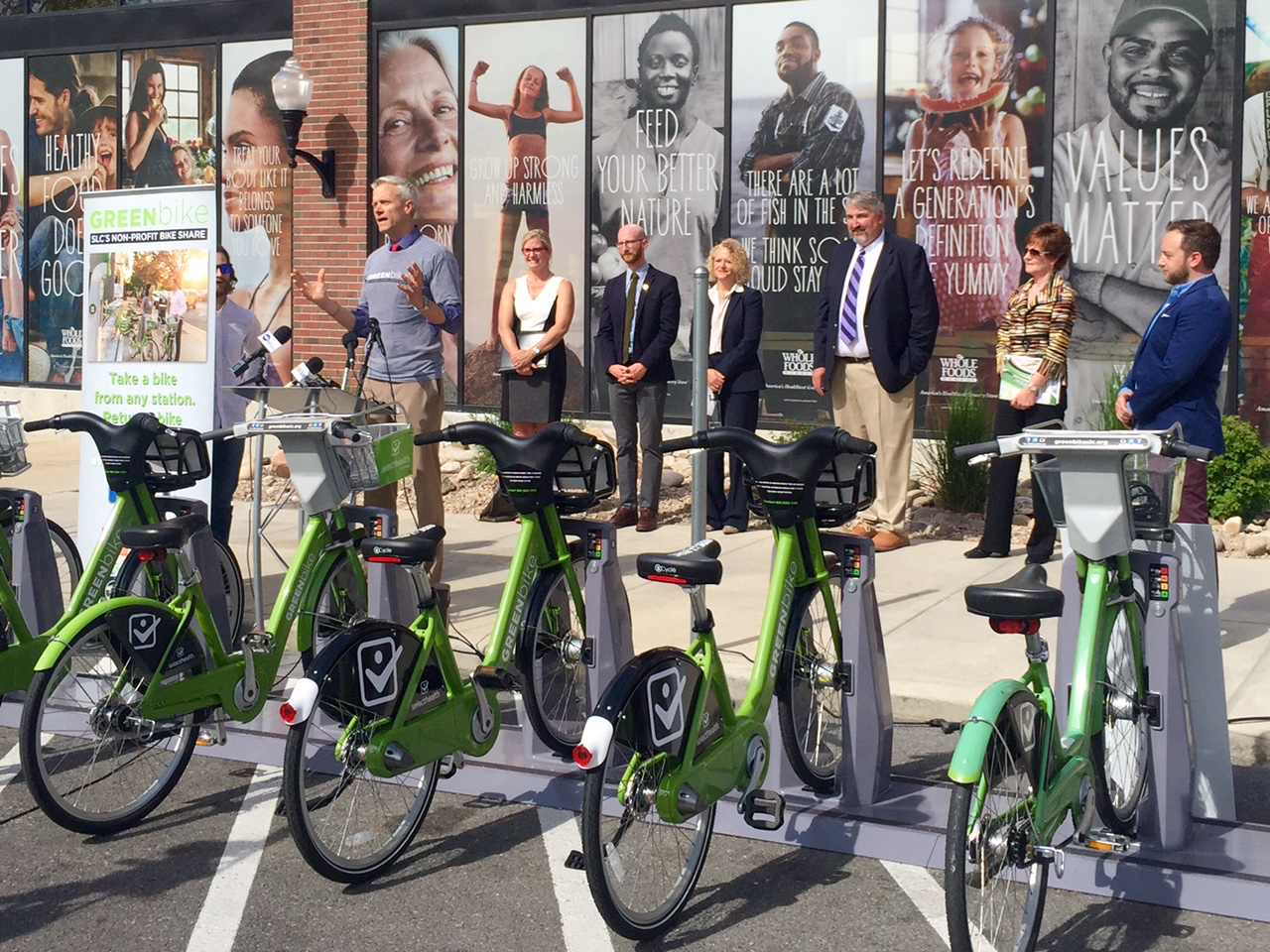 Trolley Square is now more connected.  Thursday morning city leaders and representatives from UTA and GREENbike, Salt Lake’s nonprofit bike share, officially opened the Google Fiber Station at Trolley Square, near the entrance to Whole Foods on 700 East.  The station is one of eight new stations added to the GREENbike fleet.

The Google Fiber Station is the fourth station east of the downtown core, and the furthest east of the stations.

“This is a huge step that is meaningful to everyone that doesn’t live in the downtown core,” said Mayor Jackie Biskupski.

With the new stations, GREENbike now has 33 stations between North Temple and 600 South and 700 East and 700 West.  The new stations feature lighter bikes, which GREENbike refers to as “2nd generation” bikes.  Overall, the organization will add 109 2nd generation bikes to fleet, bringing the total number of bikes to 330.

While many cities have struggled to make their bike share programs successful, GREENbike’s system has grown by 400 percent since launching in 2013, with 10 bike share stations and a fleet of 55 bikes.

A 2015 report by the National Association of City Transportation Officials (NACTO) suggests that bike share stations should be placed less than a quarter-mile, or 1000 feet, apart to maximize ridership.

The majority of the new stations are located downtown and are meant to fill in gaps in the business district, ensuring stations are closer to each other.

GREENbike has collaborated with UTA to help connect people to transit, by providing the “last mile” a term referring transportation service gaps between people and their destination.  According to UTA Chief Planning Officer, Matt Sibul, GREENbike stations directly connect to three light rail lines, a commuter rail and 20 bus routes.

GREENbike’s current expansion further integrate the system with mass transit with a new station on North Temple that connects the North Temple Frontrunner and TRAX station to the bike sharing network.

GREENbike representatives hope to see the bike share program continue to expand its reach while filling in gaps to keep stations in close proximity of each other.

Usage of the bike share program has been high, with over 100,000 trips made in 2015 and a national record set that same year for most trips per bike.