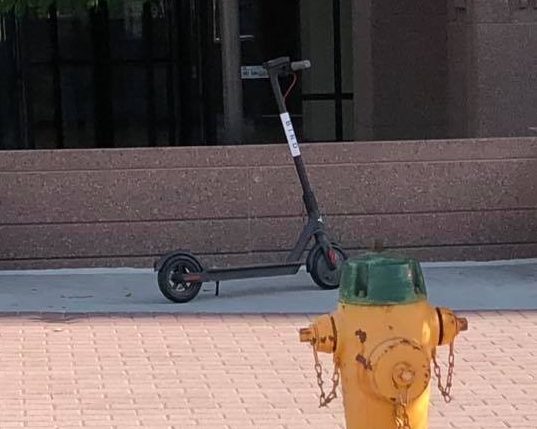 “As Salt Lake City grows, it’s clear there’s an urgent need for additional transit options that are accessible, affordable, and reliable for all,” said the company in a statement.  “Birds are a great solution for short “last mile” trips that are too long to walk, but too short to drive.  Bird offers a convenient alternative to sitting in traffic or sweating through a walk or bike ride.”

Bird’s electric scooters work similarly to bike and car sharing.  Through the Bird smartphone app, riders can locate the most convenient Bird and ride directly to their desired destination. Scooters cost $1 to start each ride plus $0.15 cents per minute and are calibrated to go a maximum of 15 mph.  Each scooter can last about 15 miles on one charge.

According to the company, the scooters are to be ridden in the bike lanes and on the street, rather than on the sidewalk.  Rides are only available during daytime hours.  At the end of a ride, Birds are to be parked out of the way of public pathways and at bike racks where available.

Every night, crews pick up each scooter for storage, charging and any necessary repairs.  Crews return each scooter in the morning at docking stockings the company refers to as “nests.”  Nests are scattered throughout the market’s service area with typically three scooters per nest.

Riders must be at least 18 years old, have a driver’s license, sign a safety agreement and participate in a safety tutorial before they can ride a scooter.

In response to issues from scooter sharing in other cities, Bird has launched its “Save Our Sidewalks” Pledge. According to a statement, companies that take this pledge will commit to actions to prevent American cities from suffering the same fate of many Chinese cities where out-of-control vehicle deployment has led to piles of abandoned and broken bicycles over-running sidewalks and polluting public areas.

Under Bird’s Save Our Sidewalks Pledge, the company promises to retrieve each scooter every night, only expand as demand increases and remit $1 per vehicle per day to city governments to use on building more bike lanes and maintain shared infrastructure.

According to the company, Bird was by Travis VanderZanden with the mission to replace road trips under two-miles (which account or over a third of all car trips in the U.S.) while getting people out of their cars, reducing traffic congestion and cutting carbon emissions.  Before founding Bird, VanderZanden was the Chief Operating Officer at Lyft, the Vice President of International Growth at Uber.

As happened with ride-share companies, since launching in 2017, Bird has come into conflict with city governments.  Recently, Denver officials ordered Bird’s scooters be removed before beginning to confiscate them.  City leaders are working with Bird to better regulate the scooters by requiring that they are docked near transit stops and are used on the sidewalk instead of bike lanes and streets.