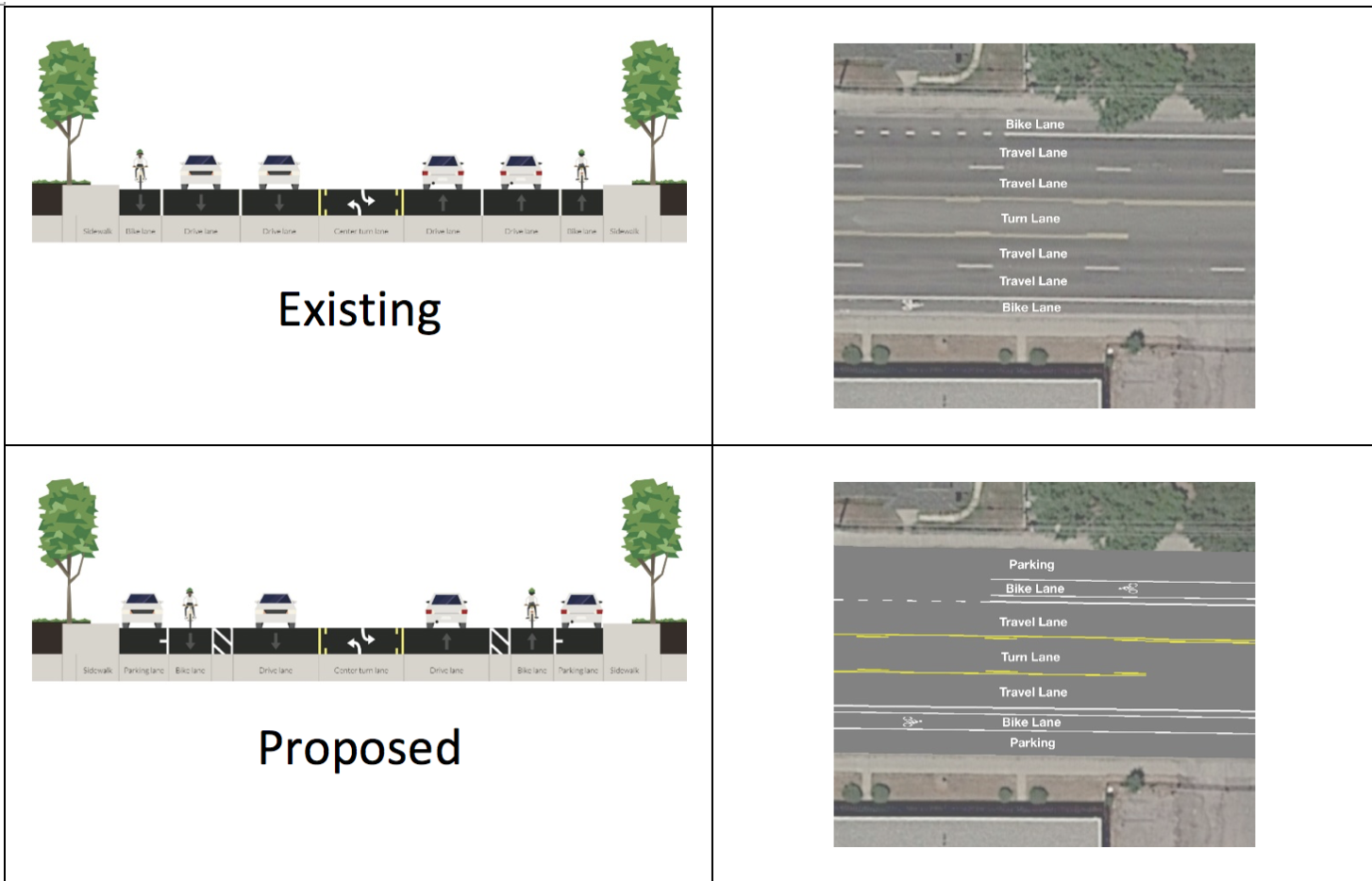 In a region plagued by poor air quality, Salt Lake City leaders should be doing all they can to encourage people to get out of their cars.  But once again Mayor Jackie Biskupksi’s administration is taking regressive steps in making our city more walkable and bicycle friendly.

Despite a Complete Streets Ordinance and a Pedestrian and Bicycle Master Plan that calls for low-stress bicycle lanes, the mayor’s transportation division is proposing the removal a protected bike lane, or cycle tracks, on a four-block stretch of 1700 South in the Ballpark Neighborhood.

The city is currently asking for resident feedback via an online survey for a proposed lane configuration on 1700 South between 300 West and State Street.  Currently, the road consists of five lanes with two lanes in each direction, a middle turning lane and two bikeways on each side of the road.

The city proposes removing two lanes and replacing them with parking so there would be one lane in each direction and a middle turning lane.  In general, Building Salt Lake supports road calming measures like this as they encourage walkability by slowing down traffic.  The bike lanes will be retained but will be relocated from running adjacent to the sidewalk to running between parked and moving vehicles.

This type of bike lane is considered by the city as a high-stress bikeway as cyclists must navigate both through traffic and drivers exiting their cars or parking.   In its Pedestrian and Bicycle Master Plan, the city defines low-stress bikeways as “multi-use paths, protected and buffered bike lanes and neighborhood byways.”  According to the city, “surveys show that 50 to 60 percent of people say they would like to bike more but are deterred by conventional bikeways (high-stress bikeways).  The city identifies the development of a low-stress bikeway network as the key component of its master plan.

Yet since Mayor Biskupski has taken office, the city has prioritized conventional bikeways over low-stress bikeways.  In 2017 the city completed the extension of the 300 South cycle track connecting the route to the University of Utah, but instead of continuing the protected bike lane up to the University, the extension features conventional bike lanes and sharrows in which the cyclist shares the road with vehicle traffic.  Additionally, the new bike lanes on 900 West provide limited visual distinction between bike and car lanes, with most of the corridor using the conventional bike lane design.  Also in the summer of 2017, the Mayor pulled the plug on a complete streets study for 2100 South before the public comment period had ended after some residents pushed back at the idea of installing a bike lane on the busy corridor.

Ironically, a portion of 1700 South between 700 East and State Street is the rare road reconstruction to happen under the current administration that included the addition of a new low-stress bikeway, but that stretch doesn’t allow for on-street parking.

On Wednesday, city staff presented the proposed road redesign to the Ballpark Community Council, the group that helped launch the redesign process through a Capital Improvement Program grant.  After the presentation, residents questioned why the bike lane was being relocated and why it wasn’t mentioned by transportation staff in an earlier meeting with the community over the summer.

The proposed reconfiguration of 1700 South between State Street and 300 West features some good ideas like removing a lane of traffic and including a buffer between the bike and through-traffic lanes, especially as the neighborhood grows.  But under almost no circumstances should the city be removing a low-stress bikeway.   For the same cost, the city can swap the proposed parking and bike lanes which would only require the one buffer already proposed and still make the street friendlier to both pedestrians and cyclists that utilize the corridor.

Since Mayor Biskupski took office the city’s reputation as a bike-friendly city has taken a considerable hit.  Earlier this year the nonprofit PeopleForBikes released it’s first ever city rating program with Salt Lake City ranking as is the 78th best city for cyclists with a score of 2.1 on a five-point scale.  In that report, Salt Lake City score very low for new bicycle infrastructure and bicycle safety for its many conventional bikeways.

If the city wants to show cyclists that their safety matters and encourage more residents to utilize other modes of transit beyond polluting cars, they need to do so through expanding the city’s bikeway network with more, not less, low-stress bike lanes.

*This editorial has been updated to clarify bike lane terminology