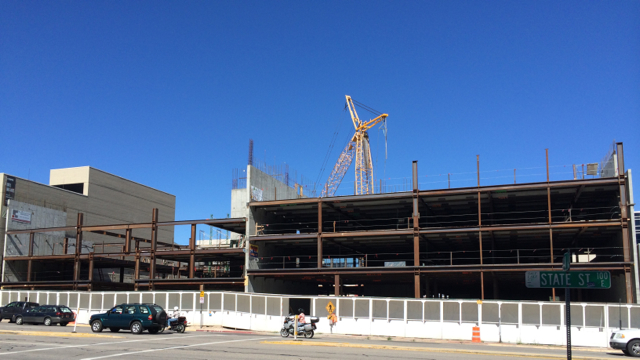 *Update: for the past few months construction has once again halted on the La Porte project.   A representative for La Porte insisted that the project is still moving forward but had no information on when construction will resume.

If good things truly come to those who wait, then the La Porte Group’s The Plaza at State Street project will be amazing.  Indeed, construction has at times seemed to move at an unbearably slow pace or at times appeared to have halted altogether.  Construction of the Plaza at 237 S. State St. started over two years ago, yet the project’s steel frames are built to just the third of the planned 10 floors.

The good news is that construction has resumed and steel should start to rise again at the plaza.  The project broke ground May of 2012 and La Porte anticipated the project’s completion by November of 2013.  But various unforeseen obstacles during construction of the underground parking garage caused repeated delays.

The Plaza at State Street will be a mixed used project designed around an European-style plaza.  The project will included 2-floors of underground parking, first floor commercial space and 136 income restricted units and 44 market rate units.   The units will range in size from studios to four-bedroom apartments -a more diverse selection than is typically found downtown.

La Porte also has preserved the historical facades of the site’s previous tenants: the REX theater and the Regis and Cambridge hotels, which will incorporated into the new project.

Another key feature of the project is its height.  While at 10 floors the plaza is still shorter than nearby residential towers, The Regent and 99 West at City Creek which are 2o and 30-floors respectively .  In comparison most new residential projects near downtown are between 5 and 7 floors.

The Plaza at State Street also plans to bring more street-level energy to Edison Street, a small through street between State Street and 200 East and 200 and 300 South.  La Porte has a vested interest in reviving Edison Street as their main office is just behind the plaza on Edison.  Technology company Super To Secret is also on Edison.