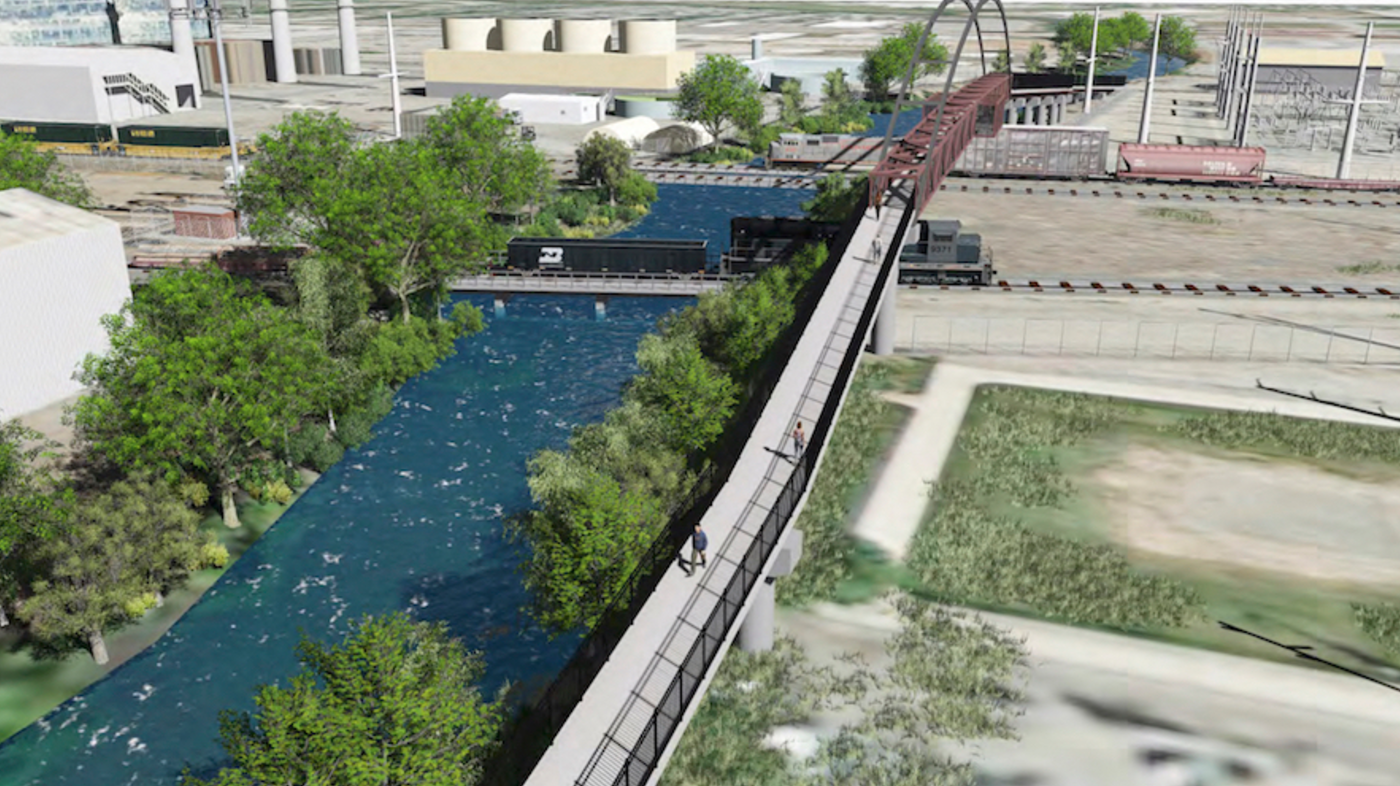 Nearly a year since funding was secured, construction is officially underway on the North Temple Jordan River Trail connection, a trail bridge that will connect North Temple to 200 South.

The trail bridge will close the remaining gap in Salt Lake City of the Jordan River Parkway Trail and will span three active freight rail lines and industrial sites.  The $6.64 million project consists of a 1,200 foot long, ADA accessible, pedestrian and cyclist bridge.

“This segment of the Jordan River Trail is a real feat of engineering and coordination, and it’s exciting to see this impressive bridge cap this long-term project,” said Mayor Jackie Biskupski in a statement.

According to a statement from the Mayor’s office, when finished, the bridge will mark the completion of the 45-mile Jordan River Parkway trail, whose planning started in the 1970s.  The trail follows the Jordan River for most of its course from Utah Lake to the Great Salt Lake marshes.

The final funding was secured June 2016, when the Salt Lake City Council approved $573,265 in the 2016-17 Fiscal Year Budget to fill the final funding gap for the project.  Other funding sources include the 2016 Utah Legislature which approved $1.23 million during the 2016 legislative session.

Urban rivers and waterfronts have long played roles in the economy of cities, but recent projects across the country are changing how government leaders think about these public spaces.

In recent years, elected officials and residents focused on the Jordan River’s recreation opportunities and restoring the health of the river after decades of neglect and high levels of pollution.  But new organizations such as the River District Business Alliance are beginning to shift the focus to the river’s potential to spur economic activity on the west side.

The Business Alliance consists of area property owners and businesses that work with Neighborworks to attract economic and community development to the North Temple Corridor.  The group has pushed for a rebranding of the North Temple corridor, called the NOTE District.

The Salt Lake City Council also expects the river to play a significant role in attracting businesses to the west side.  City planners included a section dedicated to the Jordan River’s role in the future of the Glendale and Poplar Grove neighborhoods in the 2014 Westside Master Plan.  City leaders also addressed the creation of the NOTE District describing it in the Westside Master Plan as a “unique [economic] district within the city that ties neighborhoods together.”

Both this plan and the Jordan River Commission’s Jordan River Blueprint highlight ecological conservation along the corridor as a top priority, but leaders in Salt Lake City also see the river’s strong identity within Westside neighborhoods as a potential economic catalyst by marketing the river to spur new development within key nodes, such as the intersection of 900 south and 900 west.

The Jordan River flows north from Utah Lake through Salt Lake County, to the Great Salt Lake in Davis County.  Red Butte, Big and Little Cottonwood, Mill, Parley’s, and City creeks are all tributaries of the Jordan River. The 45-mile Jordan River Parkway Trail was constructed in segments beginning in the 1980’s.

The trail itself plays a vital role in connecting Westside neighborhoods and residents to existing community resources and green space.  Segments of the trail offer direct access to five of the Westside’s eight primary schools, three libraries, restaurants, housing, and multiple employment centers. Officials also hope to use the Jordan River Parkway Trail’s close proximity to multiple destinations to build on the region’s active transportation network.

Gaps in the Jordan River trail system have limited its overall connectivity, but in recent years cities along the river have worked to eliminate these gaps.  A 2012 project added one mile of the trail near 1800 north and Redwood Road, as well as a trailhead parking lot, crossing signals, benches, and a boardwalk.

When the bridge, and an ongoing project at 14600 south, are completed,  the Jordan River Parkway Trail will provide uninterrupted access to 112 miles of open space from Roy to Provo on five different trail systems.

When completed, the trail in Salt Lake City will give westside residents improved access to neighborhoods, businesses and employment further north, as well as a direct connection to the Fairpark TRAX station.

*This is an updated version of a previous post.  Isaac Riddle contributed to the article.