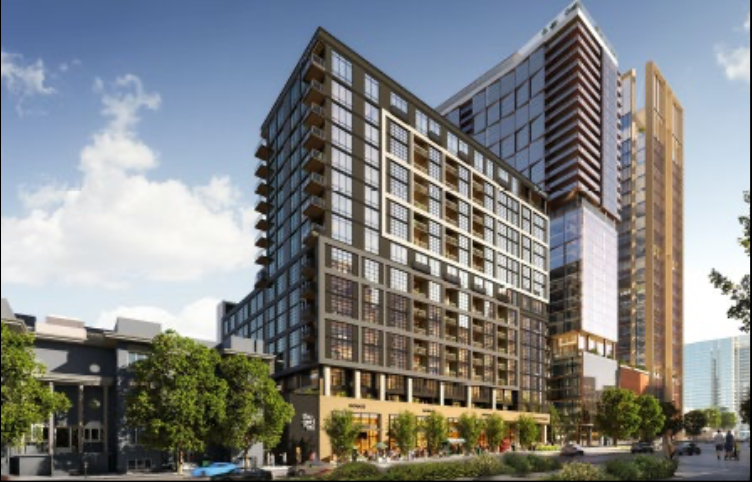 Updated plans for the West Quarter development hit the Planning Commission this week as west Downtown continues its rebirth after the depredations of urban renewal in the 1950s and 60s.

New renderings show how the project, between 200 and 300 West, proposes to partially fill the gaping hole in design fabric on 200 South between the Salt Palace Convention Center and the Gateway mall.

The second phase consists of a proposed 323-unit, 16-story, 185-foot residential mixed-use tower on 200 South, known as The Grid SLC. Required to gain approval from the Planning Commission for a height increase in D-4 zoning, a key part of its design review concerns the way it treats the public right-of-way, a key east-west corridor in the city.

The building will also be oriented to the development’s interior, where a new street running north-south will meet with an east-west corridor built as part of the development, called Quarter Row.  There will be a public easement on the new passageway.

The design review application includes updated language from the application originally filed in February, including what the pedestrian experience along 200 South will be like.

It describes “semi-outdoor dining patios, adjoined to interior retail spaces” with “an operable south wall that can open to the street.”

The 21, 400 sf of ground-floor retail will likely divided into “5 or 6 different retail spaces,” which is an increase from the February application, which talked of 2-3 spaces. Developers have hoped a mid-size grocery would occupy a majority of that square footage.

With the recent failure of Lee’s Market on 400 West and 300 North after less than three years, it will be interesting if west Downtown will support such a venture in the future. Recent addition of the convention center hotel and hundreds of new units on the block immediately to the west of the West Quarter may make a mid-size grocery viable.

Architects at Dwell Design Studio describe materials continuity in the pedestrian experience from 200 South wrapping around to the north. “On the east side, along Quarter Row, the use of the brick base extends around the corner continuing the retail articulation along the base of the building from the 200 S façade. Brick also highlights the smaller retail space on the north end of the east façade.”

Planning staff is recommending approval on several conditions, including that the existing street trees, mature honey locusts along 200 South, be preserved.