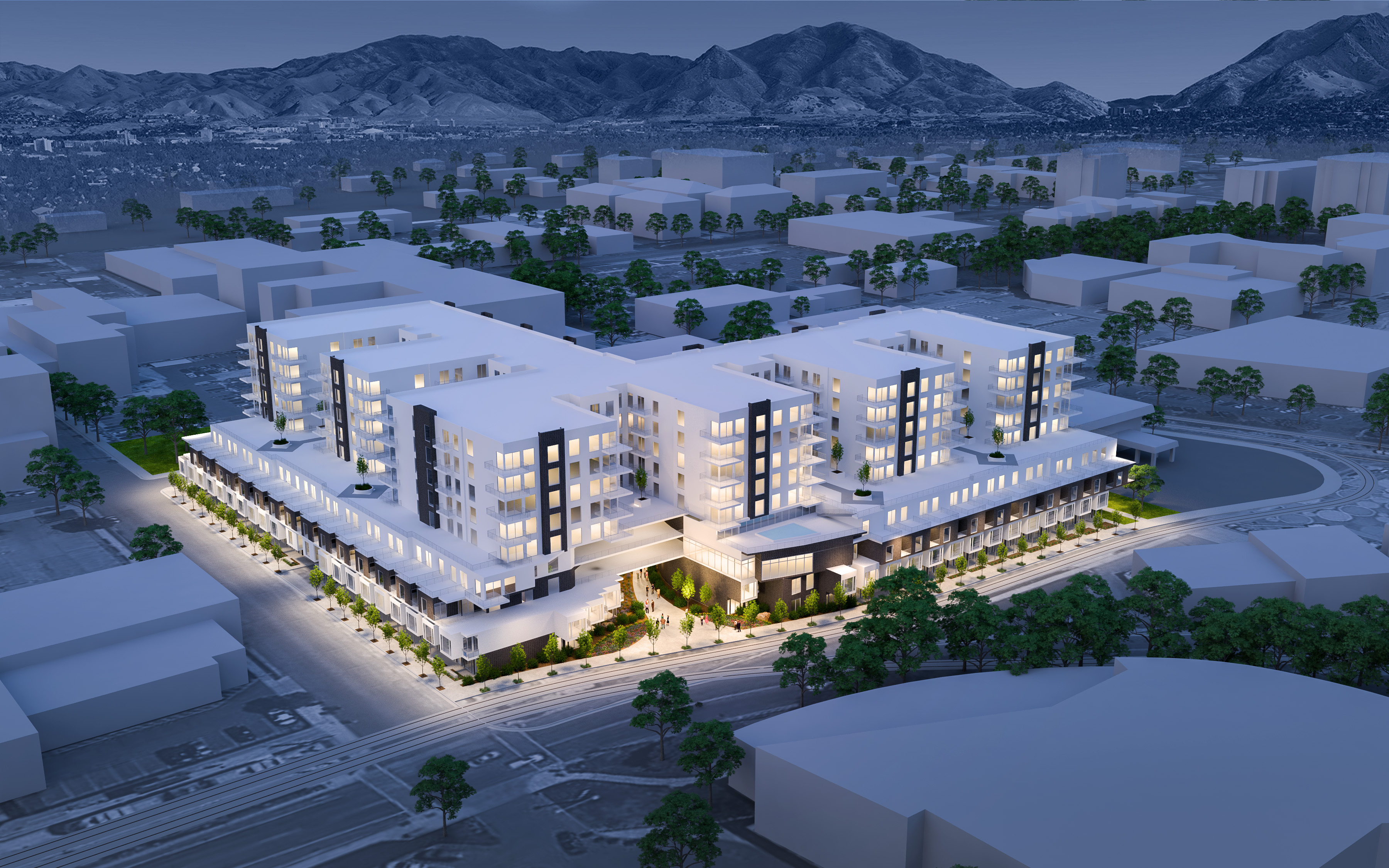 Building height continues to be a contentious issue in Sugar House.  The developers of a proposed residential project in Sugar House, deemed too big by many residents, presented updated plans to residents during a Wednesday Sugar House Community Council meeting at the Sprague Branch of the Salt Lake City Public Library.

Representatives from Boulder Ventures Development, faced a less rambunctious crowd, as they revealed modified plans for the Sugarmont Apartments, a proposed residential project at the site of the Granite Furniture Warehouse building at the intersection of McClelland and Sugarmont Streets in Sugar House Commercial Business District.  According to Kobe Lucas, the company’s vice president of construction management, the new design was based on community concerns expressed in a November meeting with residents.

While many in attendance expressed appreciation for several design changes, for some, the size of the project remained an issue.

According to Russ Platt, the architect for the project, the new design has a smaller footprint with a more human scale. Platt removed a floor from the podium level to make the building feel smaller from the sidewalk level.  The development is still planned to top out at 100 feet, but will be nine stories instead of the original ten.

Instead of one large L-shaped building that was originally proposed, the Platt’s new design splits the building into two structures that will be separated by a public walkway near the intersection of McClelland and Sugarmont Streets that would be incorporated into the local trail network.  The walkway will vary between 25 and 50 feet and will have a plaza on both north and south ends connecting to Sugarmont Drive and an expansion of Wilmington Avenue.  Platt promised the crowd that the walkway will be well lit and could accommodate retail.

“We want it to be as inviting as possible,” said Platt.

The new design calls for a podium four-stories tall, instead of five floor.  With the floor reduction, the floor heights will be increased with the first four floors of residential wrapping around five floors of parking.

The number of proposed parking stalls,  currently at 759, will remain unchanged. Platt told the crowd that city planners have advised developers that their current parking totals are already excessive.

The loss of a floor will reduce the number of proposed units from 493 to 433.  The project’s residential units will be a mix of one and two bedroom apartments, but Lucas promised that three bedroom units would be considered after several residents asked for more housing unit mixes to accommodate families.

The first two floors will reach the street level with floors three and four slightly setback.  Floor four will include a courtyard and other amenities, with the top five floors setback further from the courtyard level.  Platt argued the setbacks were included to make the project have more of a human scale at the ground level.

To alleviate traffic, the development will be accessed from the extension of Wilmington Avenue.  According to Lucas, the street will be privately funded by will be a public street.

“If we are going to have this amount of residential housing it should be next to a transit line,” said Deb Henry, a member of the community council.

If built as currently proposed, the Sugarmont Apartments would be the second tallest development in the Sugar House Central Business District.  Construction is underway on Legacy Village, a 10-story mixed-use project on the 1200 East block of Wilmington.  That project will be 20 feet taller than the current proposal for the Sugarmont development.

Boulder Venture’s original plans for the former warehouse consisted of a mix of commercial and residential buildings expanding on the Granite Block’s completed first phase of development at the northeast corner of McClelland and 2100 South.  The original plans envisioned five buildings occupying the entire west side of the Granite Block, including the already completed renovations.

The developers will need site design approval from the Salt Lake Planning Commission before building permits can be issued.  Construction is expected to start spring of 2016.