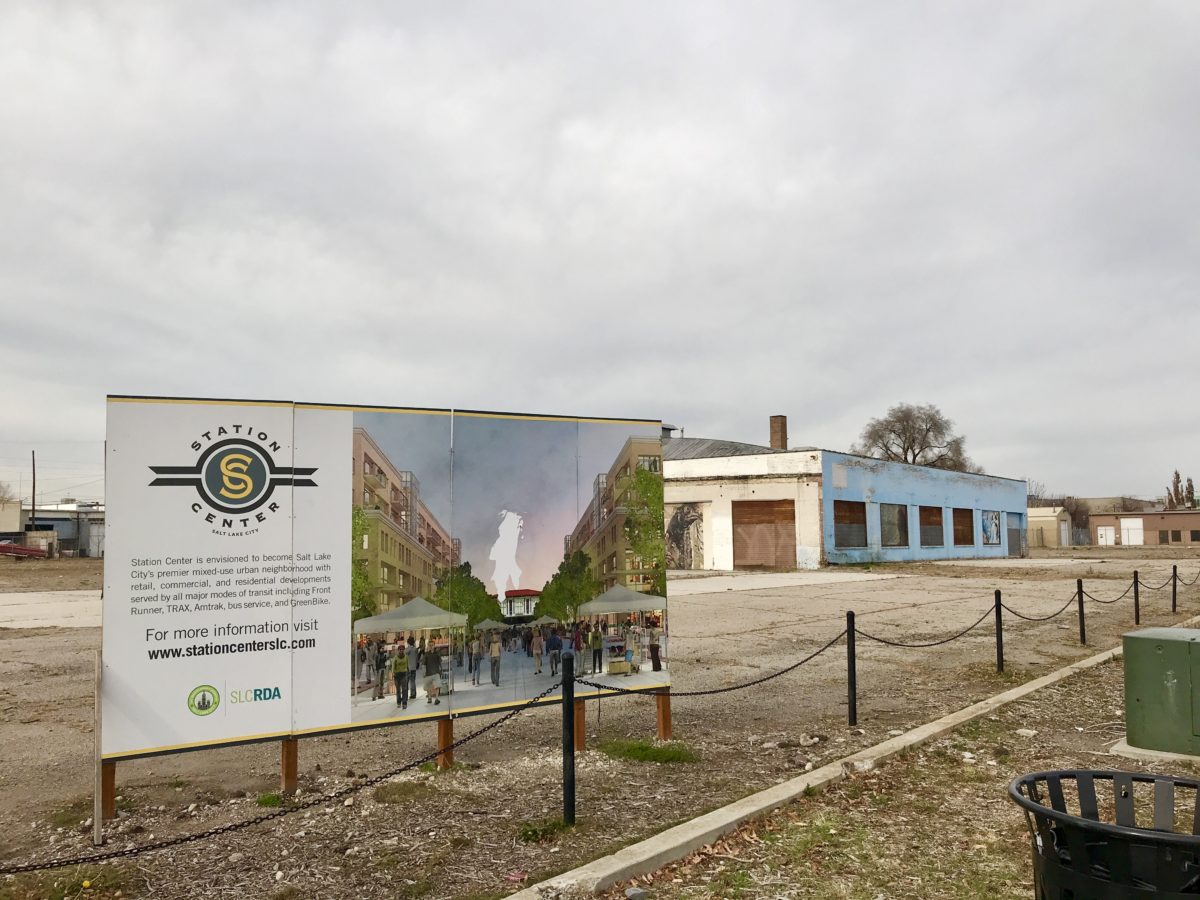 After assembling over 10 acres of property, offering multiple failed RFPs to developers, employing design consultant teams, and launching the brand “Station Center” over seven years ago, Salt Lake City’s Redevelopment Agency (RDA)  has most recently pinned its hopes for the success for its Depot District tax increment area on a major investment by the University of Utah.

An “ innovation district” that would combine research, education, and “strategic commercialization opportunities” is the city’s Plan A as it seeks to create a mixed-use urban neighborhood between the Rio Grande depot and UTA’s “Central Station” on 600 West.

At their public meeting in August, the RDA board was informed that “a pause in the process and discussions” had occurred “following a change in leadership and staffing” in the real estate division at Utah’s flagship public university.

The U.’s new leadership and staff, who took to their desks in February, is headed by John Creer, most recently a Vice President in the real estate office at Arizona State University.

Such limbo doesn’t mean the partnership is dead. The U. insisted to the contrary in comments to BSL, emphasizing the U. “remains committed to a partnership with our capital city.”

Yet the current uncertainty of that commitment prompts the question whether a master developer is still in the works for the city’s 10-plus acres.

That very question arose this month as the city council deliberated as the RDA Board over the Station Center budget request, $3.9 million to complete the city’s property acquisitions south of 300 South.

It got us thinking about prospective Plan B’s for the Station Center project.

The city’s latest process steps take place in the increasingly long shadows of a setting sun. Its main income source – 25 years of property tax increment – is set to expire next year in 2023.

The modest tax growth performance of the district and the stalling of the latest Station Center plans are cruel reminders to the city of its failure to develop its properties, even as significant residential development occurs just a block north on 200 and 100 South.

Construction just to the north of the city’s Station Center properties, along 200 and 100 South. Photos by Luke Garrott.

A master developer with a public mission like the U. of Utah, bringing a Research Park 2.0 (BSL’s term) to the Depot District, must seem like a dream for the understaffed RDA, which has over 10 acres of property to manage and ultimately sell in the public’s service.

An “innovation district” of students, researchers, and health science entrepreneurs would help create the 24-hour urban mixed-use neighborhood long desired in city plans for the area, this one from the early 1990s.

Despite the RDA’s reporting a “pause,” the U.’s public affairs office insisted in an email “these discussions are complex and ongoing, involving strategic commercialization opportunities that would be advantageous for both the innovation districts in downtown’s Rio Grande neighborhood and at The Point in Draper.”

While University of Utah Health has muscled out a building boom throughout the valley in the last five years or so, the U’s “lower campus” academic presence in the suburbs has preferred campus extension sites in existing office parks, for example in Murray and Sandy.

That’s set to change with the new development of a $57 million campus in Herriman to be shared with Salt Lake Community College.

A Research Park 2.0 would be quite another lift – building, owning, leasing, managing, and otherwise “commercializing” the property. The project would likely have to satisfy a myriad of RDA requirements including creating affordable housing and managing a public “festival street” on 300 South. All while being heavily regulated by multiple levels of government as a public entity.  A truly complex enterprise that would take years in the pre-construction stages.

The question for RDA staff is whether they have the time to wait. Political pressure for change is building among policy-makers at city hall.

Some proposals working their way through city process are likely to change the terms of discourse between the city and any potential developers, including the university. How? One will dramatically change the value of land.

First, the area seems destined for a rezone. The area’s current combination of G-MU Gateway Mixed-use, D-3, and CG General Commercial may soon change by the look of several proposals soon to reach the city council for decision.

One of those – allowing increased heights in the Rio Grande area – would significantly change the design shape and pro-fomas of future projects.

At the RDA Board meeting this month, District 5 Council Member Darin Mano offered RDA staff a wealth of feedback on the current plan to seek a master developer for the city’s over 10 acres of parcels.

“Any time we have two city blocks where the majority of the parcels are operated, managed, and developed by one entity that leads to things that I don’t consider to be great urban scale and neighborhood and community building,” Mano stated.

Mano told us in a follow-up conversation that “one of my  biggest concerns with RDA projects is that when they hit a certain scale and you end up with one user, they lose the ability to create diverse mixed use neighborhoods. That said, if it ever makes sense to do a project like that, an organization like University of Utah that has a definite public benefit mission, I feel more comfortable with.”

When asked about the possibility of increased height and density allowances in zoning code, Mano responded that “If density makes sense anywhere, it’s right by the Intermodal Hub [UTA’s “Central Station”].

Signaling that there is significant interest among the city council to increase heights in the area, Mano added that “What is concerning about the heights study was that the previous proposal wasn’t folded into other purposes, like ground floor publicly accessible retail space and affordable housing.”

Mano is also leading a chorus towards a potential Plan B for the Station Center properties if the master developer scenario fails.

Expressing equity as well as urban design concerns, Mano told Building Salt Lake that he would like to see the RDA “begin splitting up its large parcels, to achieve a good mix of pretty small (half acre or less), medium size, and large” properties on offer to developers.

“Large parcels, say over two acres, cater to experienced builders of significant wealth. I think it’s wrong to only be working with those types of developers even though they’re a safer bet. Equity concerns should lead us to empower people who haven’t built before. I think of the restaurateur who came out of Spice Kitchen [the city’s incubator space], to own land, develop and manage it, and be able to create wealth.”

Urban design considerations are also at the top of mind for Mano. “I’d like to see some smaller buildings like in Central 9th, that fit the scale of the human body better. The Depot District, especially on the RDA properties, should have a vibrant, good mixture of buildings and uses. True mixed use has activity 24 hours a day. That was one of my concerns with the master developer plan – it may only be activated during business hours and not evenings and weekends.”

Mano would like to see a series of RFPs offering a variety of parcel sizes and end-uses, including affordable housing and ground-floor retail. While RDA staff re-assured Mano that those elements continue to be on the Agency’s list of priorities, they seem to be getting lost in the current innovation district master-developer-led plan.