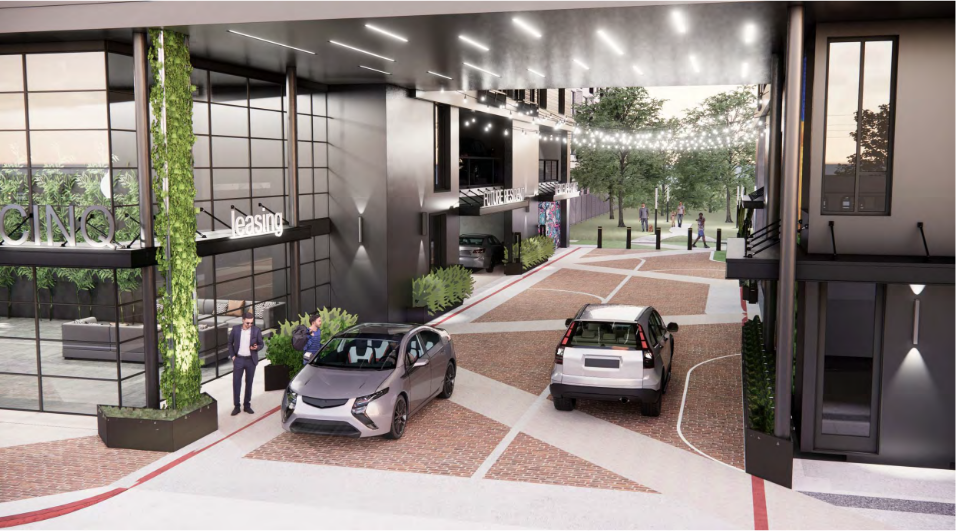 Salt Lake City’s new off-street parking ordinance – how much parking developers are required to build given their land use and location – will be getting its final look by the city council later this spring and summer.

The reform may have significant implications for the cost of development, rent, and for-sale product; as well as the city’s level of auto-dependency and air quality. Where off-street requirements are significantly reduced, it will also increase the competition for on-street parking.

Yet 80% of the city will see little change. The proposal puts the grand majority of the city in its “General context area” which, according to the Planning Division’s staff report, “includes the city’s zoning districts that tend to be more auto-dependent and/or suburban in scale and parking needs.”

In the city’s most urban and dense districts (the ordinance’s “Transit context”), two multi-family projects on the same block in the Depot District in part demonstrate the urgent need for reform.

Current code for required parking for residential development in the city’s most urban and dense zones looks progressive: no minimum exists in D-1, 2, 3; G-MU; TSA core, FB-UN-2, -3; FB-SC; and R-MU.

In the Depot district, current code looks like it enforces a parking maximum, at a .5 stall per unit ratio. The two projects, located between 100 and 200 South, 500 and 600 West, both exceed that limit.

Alta Depot, at 565 W 100 S. Aerial rendering from the east, with the N-S midblock walkway, connecting to 200 S through the CINQ project, at bottom. Images courtesy Studio PBA. Photo of midblock by SLC Planning.

Currently engaging with the Building Services department in their entitlement processes, both projects use an existing loophole to subvert the parking maximums in the G-MU Gateway Mixed Use zone.

The larger of these projects, the 288-unit Alta Depot at 565 West 100 South, was eligible for 730 parking spaces through the Transportation Demand Management (TDM) process, according to SLC Planning’s staff report. Alta Depot opted for 373, at 1.3 stalls per unit – well over twice the maximum intended in G-MU code.

If the developers wanted to maximize their parking at 730 stalls, they could have provided a 2.5 stall to unit ratio, five times the G-MU maximum.

CINQ, a 203-unit project at 530 West 200 South incorporates the midblock walkway from the north. People not in cars will have to share the public easement with motor vehicles entering and exiting its parking garage, which offers 123 spaces for a .6 stall to unit rate. Images courtesy Dwell Design Studio and dbUrban Architecture.

The work-around exploited by developers to ignore parking maximums is called Traffic Demand Management (TDM). Defined in city code as intending to reduce car usage and its negative externalities for livable cities, TDM ironically allows Downtown and transit-area developers to explode the number of stalls they can build.

Developers enjoy this flexibility if they incorporate strategies that are intended to reduce car usage (“one major and one minor”). Alta Depot satisfied these TDM stipulations by providing an increased number of electric car charging stations and expanded bike parking, as well as on-site amenities – a business center and a gym.

If a developer decides to use TDM, they are eligible to use a different parking table than the one specified for the city’s most dense and urban districts, and instead can apply the higher numbers allowed in the use table applied to the rest of the city.

Alta Depot’s parking numbers went like this, according the Planning Divsion’s staff report:

That’s right: 730 spaces allowed for a 288-unit building in the neighborhood with the greatest number of transit options in the state of Utah – TRAX, bus, Greenbike, and FrontRunner commuter rail are available within 1 ½ blocks of these developments. This despite the code having a specific table for its most urban zones, including G-MU, capping parking at .5 stalls per unit.

The new ordinance will continue to offer reductions in minimum requirements as incentives for sustainability elements like proximity to fixed-rail transit, providing bike parking and electric vehicle charging stations. Instead of being located in a specific TDM section, they are included in other areas of the code, Daems said.

Providing affordable and senior housing units also enable developers to lower their parking requirements. Currently in the proposed ordinance, developers can combine strategies to lower their minimums as much as 40%. The city council, according to Daems, is considering lowering that number for affordable housing. This would apply city-wide, not just in the “Transit context” zones.

In addition, District 5 Council Member Darin Mano has been listening to constituent concerns in Central 9th about their perceived parking problem. The city’s form-based codes (FB-UN-1, 2 and 3) have no minimum parking requirements, and many projects in Central 9th have gone parking-free, increasing the competition for on-street spaces.

Whether he and other council members are interested in changing those, and other terms in the new parking ordinance, will be decided this summer. Here are links to the ordinance and the staff report.