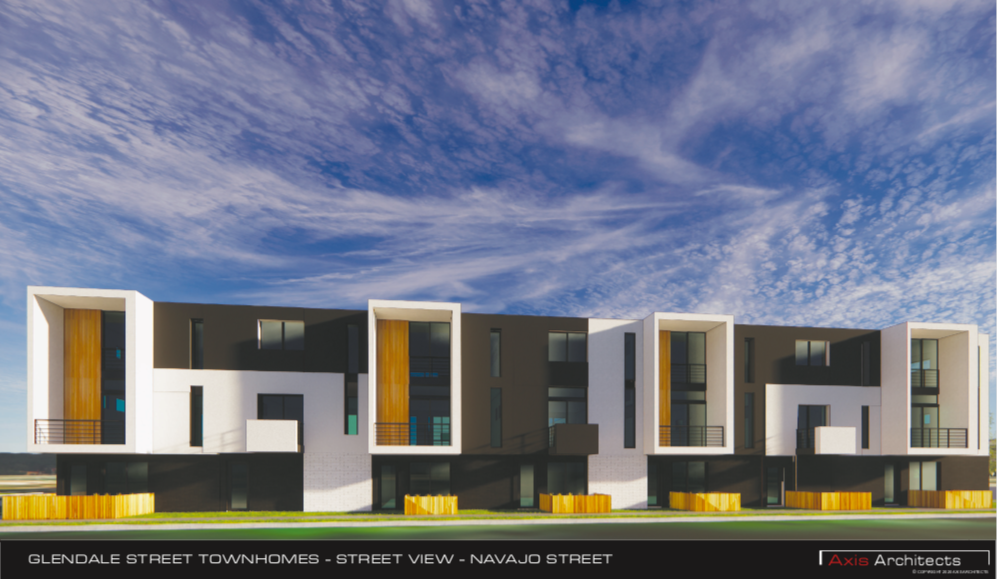 The area is unique for several reasons. Its diagonal street pattern and traffic circle run counter to the city’s dominant N-S, E-W grid. It is also one of the few properties zoned for neighborhood commercial on the West side.

The small commercial district – or “node” as it’s defined in the city’s Westside Master Plan – also includes a public school, senior housing, and a church. It is surrounded by single-family zoning, and is also near the somewhat mixed-use California Ave (1300 S) corridor.

The Planning Commission is being asked to approve the project as a Planned Development. It does not require City Council approval.

The context: present conditions and the master plan

The Glendale Street Townhomes site is surrounded by R-1-5000 + 7000 zoning. Notable in the master plan is the lack of any areas marked for densification. It mentions “areas of opportunity” while soft-pedaling what that might mean in areas like Glendale Plaza.

Glendale Plaza is identified as a “neighborhood” commercial node, the least-intense of the plan’s classifications.

“Nodes” are a central aspect of the plan, which observes that existing nodes on the west side “provide the community with a variety of housing options, increase the stability of the existing residential neighborhoods by providing the necessary daily or discretionary retail and service options and provide opportunities for employment within the community.”

The plan says the Glendale Plaza node “is missing a couple of elements but has potential.” “It has the size and bank of developable space to be a thriving community node, but the access and visibility of a neighborhood node.”

It concludes, “The Glendale Plaza node is most suited for mixed use development that has a strong residential component.”

Developers Langue Inc. (from local firm Axis Architects) are hoping that the Planning Commission will exempt them from the requirement that all residences be street-facing. Only 24 of the project’s 58 units front Navajo Street and Glendale Drive.

As for public benefit, the developer’s narrative states “Site design includes a mid-block walkway from Glendale (the city street along its long perimeter), entirely through the project to the amenity area near the rear property line, and from there northwesterly to the public sidewalk at the Navajo Street entrance to the project. This walkway will be open to the public. It will connect to and expand the network of walking paths in the neighborhood.”