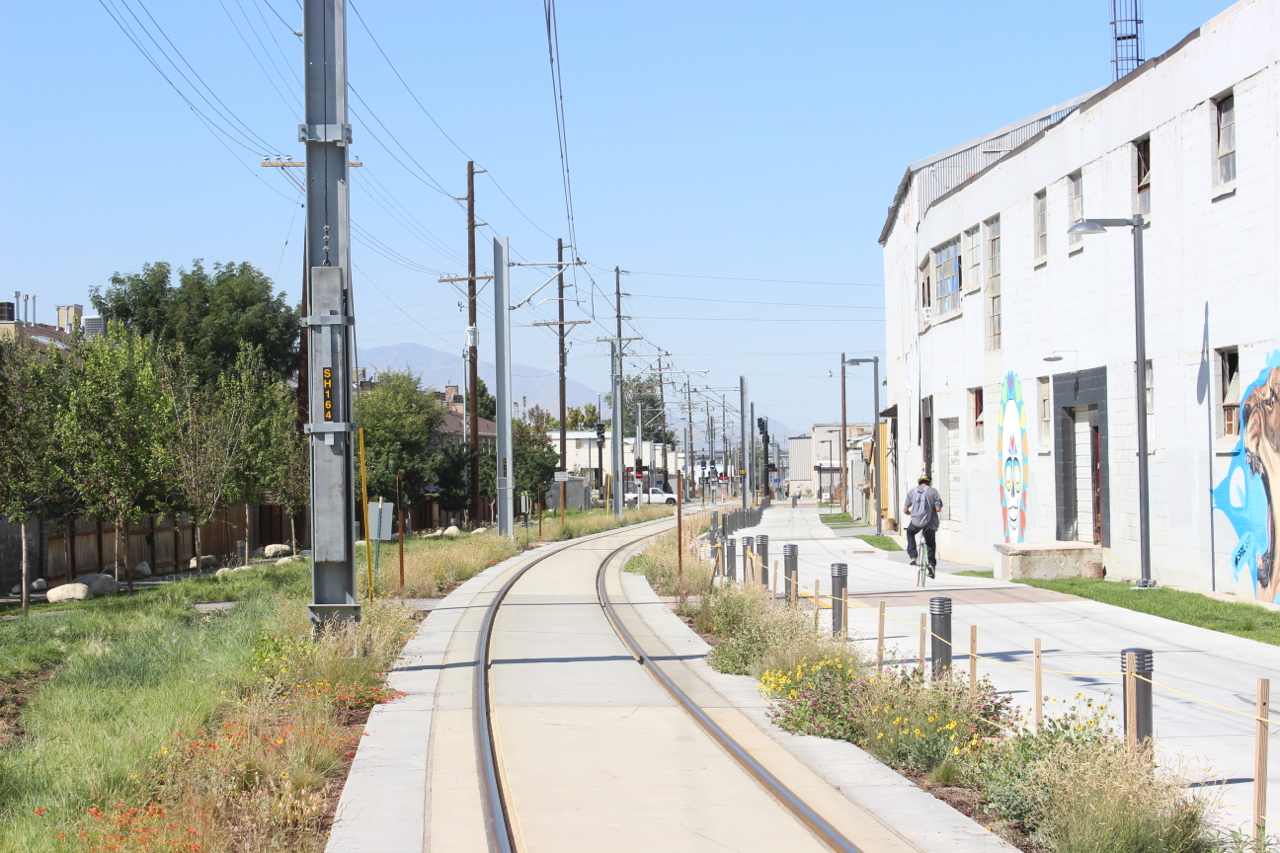 The S-Line Greenway, a mile-long green space and trail from 500 East to McClelland Street, is officially open.  Salt Lake City Mayor Ralph Becker, South Salt Lake Mayor Cherie Wood and Salt Lake County Mayor Ben McAdams each spoke along with representatives from the Utah Transit Authority and the Salt Lake Redevelopment Agency in front of the bocce court at the 600 East crossing of the greenway.

“This corridor is really about partnerships and its also about connections,” said Mayor Becker.

The greenway was a collaborative effort between the cities of Salt Lake and South Salt Lake, UTA (which owns the line’s right-of-way) and the PRATT Coalition, a group dedicated to the development of the Parley’s Trail.

The S-Line Greenway runs parallel to the S-Line streetcar.  The streetcar and greenway replaced what was an abandoned rail corridor.  Most of the line runs on a single track that connects the Sugar House neighborhood to all three TRAX light rail lines at Central Pointe Station in South Salt Lake City.

Apart from the bike and pedestrian pathway and streetcar the greenway also includes: public plazas, art, walking paths, a bocce court and a new segment of Parley’s Trail, a trail that will eventually connect Parley’s canyon to the Jordan River.

The next phase of construction of the streetcar will add needed tracks to increase stop frequency while also extending the streetcar to the intersection of 2100 South and Highland Drive in front of the redeveloped Sugar House Monument Plaza.

While ridership has been disappointing, the streetcar and greenway have proven to have a positive economic impact.  There are nearly 600 residential units under construction within 2 blocks of Fairmont Station, the current end of the S-Line.  Construction of Sugar House Crossing, or the Vue at Sugar House Crossing, and Liberty Village apartments will be finished by the end of the year.  Both projects are a less than a block away from the S-Line and include a combined 370 residential units.   The nearby Wilmington Gardens development will include over 200 residential units and will be finished sometime next year.

The economic impacts of the S-Line are visible in Sugar House and city leaders in South Salt Lake hope to see similar large development along the section of the line that passes through their city.   South Salt Lake’s portion of the S-Line, 500 East to Central Pointe Station, is less developed than Salt Lake’s portion and provides a lot of opportunities for growth around the streetcar line.

“We now have a route from our future downtown in South Salt Lake to Sugar House,” said South Salt Lake Mayor Cherie Wood.  “We have an opportunity to create a new neighborhood in a community where it’s needed.”

South Salt Lake plans for a future downtown call for dense development between State Street and the Central Pointe Station just south of 2100 South.  In today’s press conference, Mayor Wood cited a large mixed-use project where the S-Line crosses with 400 East that should begin construction next year.  According to the mayor a property at the intersection of the S-Line and State Street, which is currently a bowling alley, is also for sale and looking for a developer.