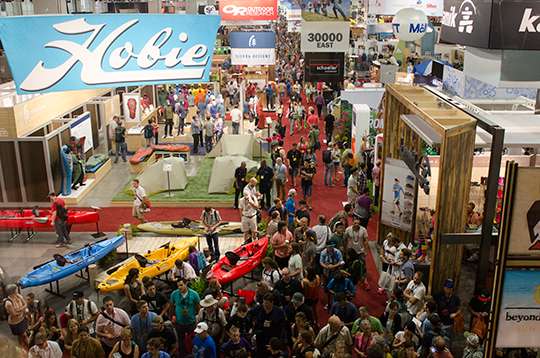 Thousands of merchants and buyers will descend in Utah tomorrow at the official start of the Outdoor Retailers Summer Market held at the Salt Palace Convention Center in downtown Salt Lake City.

Salt Lake and the Outdoor Retailer Market’s eighteen year relationship has been very symbiotic.  Salt Lake and Utah’s outdoor culture have made the city a compatible host for the Outdoor Retailer Summer and Winter Markets held every January and August at the Salt Palace Convention Center.  As the OR Market has grown so has the city and its convention center, and now Salt Lake may have its new tallest building partially due to the success of the OR market.

The economic impact of the biannual market has long been noticed by local leaders.  The threat of moving the OR market out of Utah inspired an expansion of the convention center in 2006.  Leaders were very vocal about the retailer’s influence on the decision to expand the Salt Palace to include more meeting rooms and convention space.  Beginning in 2011, the OR Market became the go to reason for the need for a convention center hotel.

The OR, produced by the Nielsen Expo Outdoor Group, attracts over 40,000 attendees each year and  has brought in over $468 million into Utah’s economy.  The market is secured to stay in Utah until 2016, but now that a new convention center hotel is in the works, their will be an added incentive for the OR to stay in Salt Lake.

Legislation was approved this winter that would allow a developer to construct a 1,000 room hotel built over expanded convention space.  The legislation provides sales tax rebates up to $75 million over 20 years to the hotel operator for the construction of the added convention.  The hotel portion will not be subsidized.   At 1,000 rooms the convention center hotel could very much be Salt Lake’s next tallest skyscraper.

A site and developer for the new hotel have yet to be chosen, but the OR has proven to be the dangling carrot needed to help Salt Lake and local leaders take the next step in becoming more competitive in the lucrative convention market.  Hopefully construction of the convention center hotel begins soon.  As the OR continues to grow and if Salt Lake isn’t ready to accommodate that growth the state’s largest convention may find a new home.