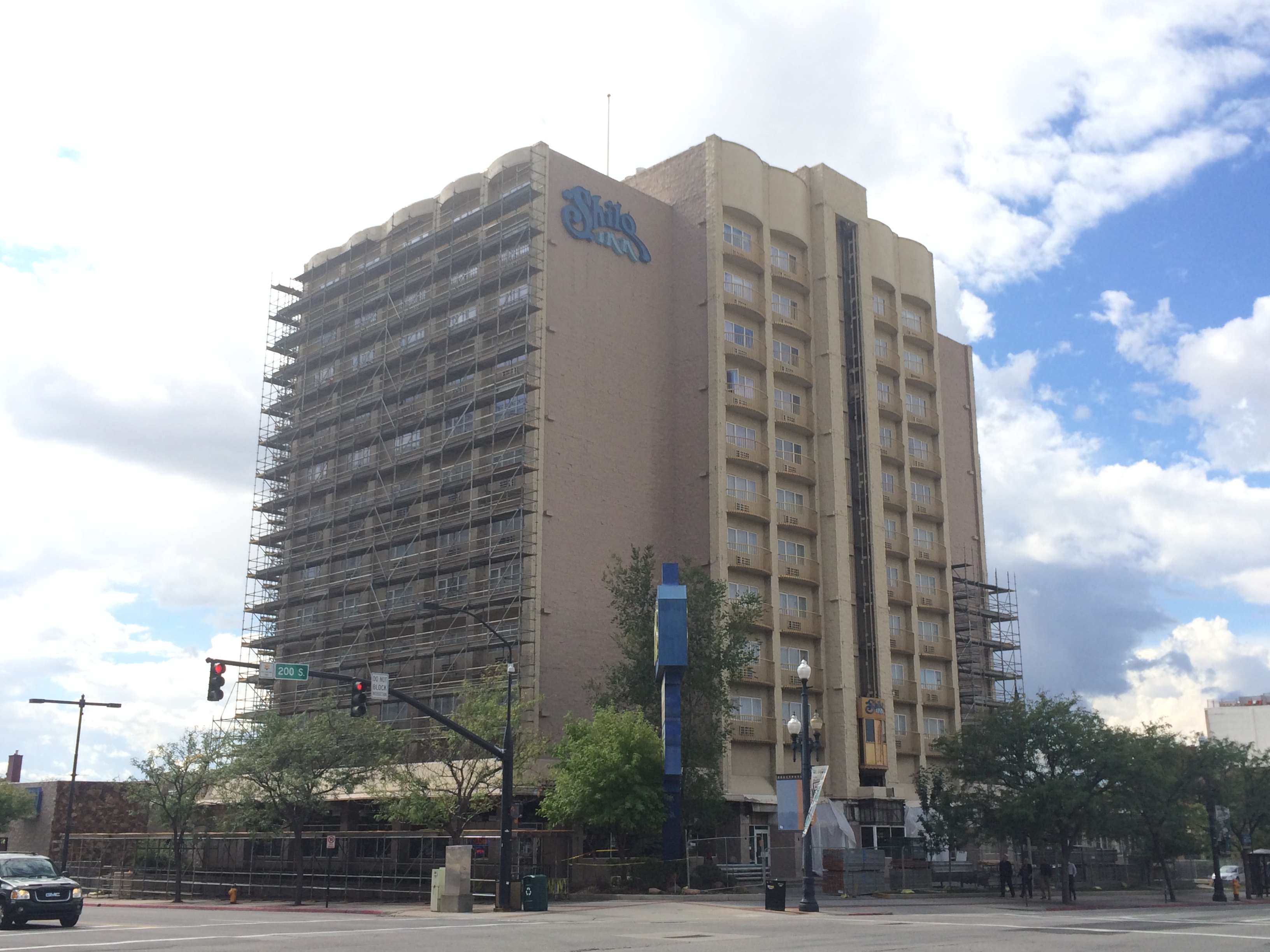 Over the last four decades, it was hard not to notice the Shilo Inn when passing through downtown Salt Lake.  For years the 1970’s era hotel was adorned with Vegas-style neon lights, an illuminated exterior elevator and a conspicuously placed neon sign that helped the inn earn the title of “ugliest building” in a Salt Lake Tribune poll earlier this year.

Gone are the neon lights and notorious “Shilo Inn” illuminated sign (the sign is up there, it is just not lit up anymore).  The hotel, at the intersection of 200 South and West Temple in downtown Salt Lake City,  is being renovated and re-branded as a Holiday Inn Express.  The hotel’s new owners, the Burgess Investment Group (a family-owned business based out of Ceder City Utah), acquired the property last winter.

The 12-floor, 200 room hotel is notorious not just for decades of questionable taste in aesthetics, but as the site of one of Utah’s most bizarre murder-suicides.

In 1978, Rachel David and six of her children fell to their deaths from an 11th floor balcony of the then International Dunes Hotel.  Only David’s then 15-year-old daughter survived the fall.  According to reports, the younger children were thrown from the balcony while the older ones voluntarily jumped.  The family’s husband and father, self proclaimed prophet Immanuel David, took his life a few days earlier via carbon-monoxide poisoning.

Since the murder-suicide, the Shilo Inn has become popular with friends of the occult.  The hotel is on various lists of haunted buildings, with many testimonials of the hotel’s supernatural elements found online.

Urban myths aside, the hotel is ideally placed across the street from the Salt Palace Convention Center and kitty-corner to the Capital Theater and its new expansion.

According to city records,  updates to the the Shilo Inn building include: a new exterior skin of E.F.I.S. (Exterior Insulation and Finish Systems, or in other words synthetic stucco), regular stucco, new guardrails installed at the balconies and stair towers and a new porte cochere (carriage style awning) that will be added to the front entrance.

The hotel will keep the Shilo Inn name until renovations are completed, where it will then be a Holiday Inn Express.  The revamped hotel will soon have to compete with the proposed convention center hotel that must be built within a 1000 feet of the Salt Palace Convention Center.  Requests for Proposals for the convention center hotel are due to the county by the end of this month.