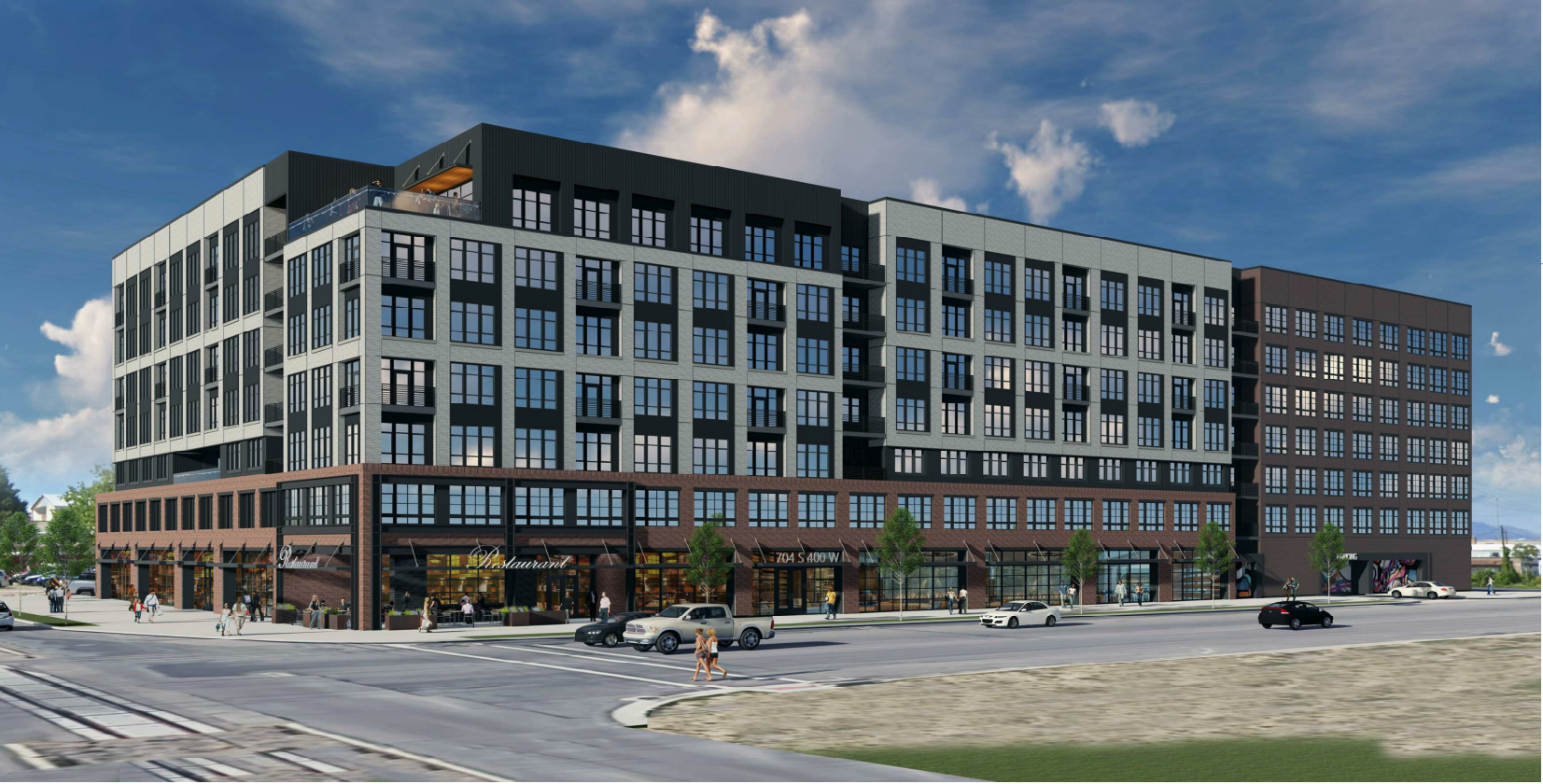 A group of community members asked city officials to block a mixed-use development in the Granary District on Wednesday, saying its lack of setbacks wouldn’t help fix an already dire lack of greenspace in Salt Lake City’s center.

The developer said they were adding more street engagement than most projects, including attractive design elements, ground-floor retail with outdoor seating, a mid-block walkway and dozens of new trees.

But the Planning Commission agreed with a late objection from a trio of community councils and voted 5-2 to stall a mixed-use project near 700 S. 400 W. at its meeting Wednesday night.

The flare up highlighted the tensions around how the city can serve the Downtown, Ballpark and Central 9th neighborhoods, which collectively make up a bulk of the Central Community planning district, the most underserved by parks in the capital city.

“We are concerned about the precedent that would be set if this development is recommended for approval as designed,” the councils wrote in a joint letter sent to the mayor and others. “It furthers the inequality of green space and tree canopy between the East side of the city and its southern and western neighborhoods.”

It was a rare instance when a private project was caught up by a relatively mundane part of zoning code and debate around public services.

The project needed special approval because developers sought to build taller than what’s allowed outright by the area’s zoning. The code, which the developer called “antiquated” given the city’s goals for encouraging urban redevelopment, says additional height is allowed if developers keep the building 10 feet from the property line, or about 15 feet from public sidewalks.

Other city rules require that 3.3 of those 10 feet to be landscaped. It will all be private property.

The pushback comes as the city struggles to figure out how and where to add more parks.

While the city is investing in Pioneer Park Downtown, it struggles to find space for greenery in the historically industrial space near the Granary District, which is being rapidly redeveloped by private developers. It comes not long after the city gave a Downtown theater to a developer in exchange for privately owned open space on top of a parking garage that the public will be able to access.

Salt Lake City recently released a request for information to consultants to make recommendations for the nine acres of vacant city land nearby known as the Fleet Block.

In it is a request to identify space for greenery and ample public gathering spaces.

Mayor Erin Mendenhall has stuck with plans to see the Fleet Block redeveloped and integrated into the neighborhood over calls for parkspace on the largely vacant lot.

She instead has focused on adding a regional park to the Glendale neighborhood near 1700 South.

The Downtown Community Council, which signed onto the letter with Ballpark and Central 9th, has pushed back against the notion of another regional park in the city center.

Its focus is squarely on improving Pioneer Park.

Pacific Yard seeks to do what a number of developers are doing in the neighborhood by replacing a vacant industrial warehouse building with housing above ground-floor retail space.

Years of study, recent federal tax incentives and its proximity to Downtown have teed up the Granary as an area of impending transformative development in coming years.

Pacific Yard sought permission to build an additional two stories and waive the 10-foot setbacks required in the General Commercial (CG) zone on two sides. The property would still have 26 additional trees compared to none that exist today and a 16-foot walkway on its west side open to the public.

Rather than the private setback space, Alfandre proposed building up to the lot line, which surveys in the area show is a few feet back from the narrow city sidewalk.

Renderings showed diners sitting at a commercial space on the corner of 700 S. 400 W.

Members of the Planning Commission were hung up on the letter from the community councils — dated either Feb. 20 or Feb. 22 — and their personal preferences for design.

“I don’t want the 10-foot setback, I don’t want it because it’s not good urban design,” said Brenda Scheer, who voted to stall the project. “I’m hoping for something more along the lines of dividing up the frontage. So that it isn’t 330 feet long and has maybe a place in the middle of it where there’s a little garden.”

Alfandre proposed a seven-story building with 292 dwellings and 6,500 square feet of retail on the ground floor. At 88 feet, the building was 28 feet more than what’s allowed by-right in the CG zone and required a design review with the planning commission.

The developer, a Building Salt Lake supporter, said pushing buildings up to the property line would help to encourage pedestrian engagement and better urban design on a street known for its wide right of ways and spaced out buildings.

“Instead of a landscape buffer, we’re providing active ground floor use,” James Aflandre told us. “That’s much more friendly for the pedestrian environment than what the current zone allows.”

While the city helped to shepherd in the coming wave of development to the area, it didn’t rezone the property to allow a walkable environment by-right.

Alfandre pointed to a recent self-storage facility coming to the neighborhood that’s allowed in the CG zone without needing approval from the Planning Commission.

The Planning Commission also recently gave approval to developers to build a parking garage with space for almost 1,000 cars within a stone’s throw of the Pacific Yard.

While the commission voted to pause the project while Alfandre revisits issues raised in the letter, a few members questioned the majority’s decision.

“A project like this that engages the street and includes this amount of retail is what we need more of,” said Jon Lee, another member of the commission. “Usually the entire ground floor would be a lobby that’s not accessible to the public in any way.”

Lee suggested if the city wanted to encourage greenspace in the area, it could take space from one of the numerous and ultra-wide streets and make it a linear park.

“If you start to push that back,” Lee said, “that becomes less attractive to businesses that could actually use these spaces.”