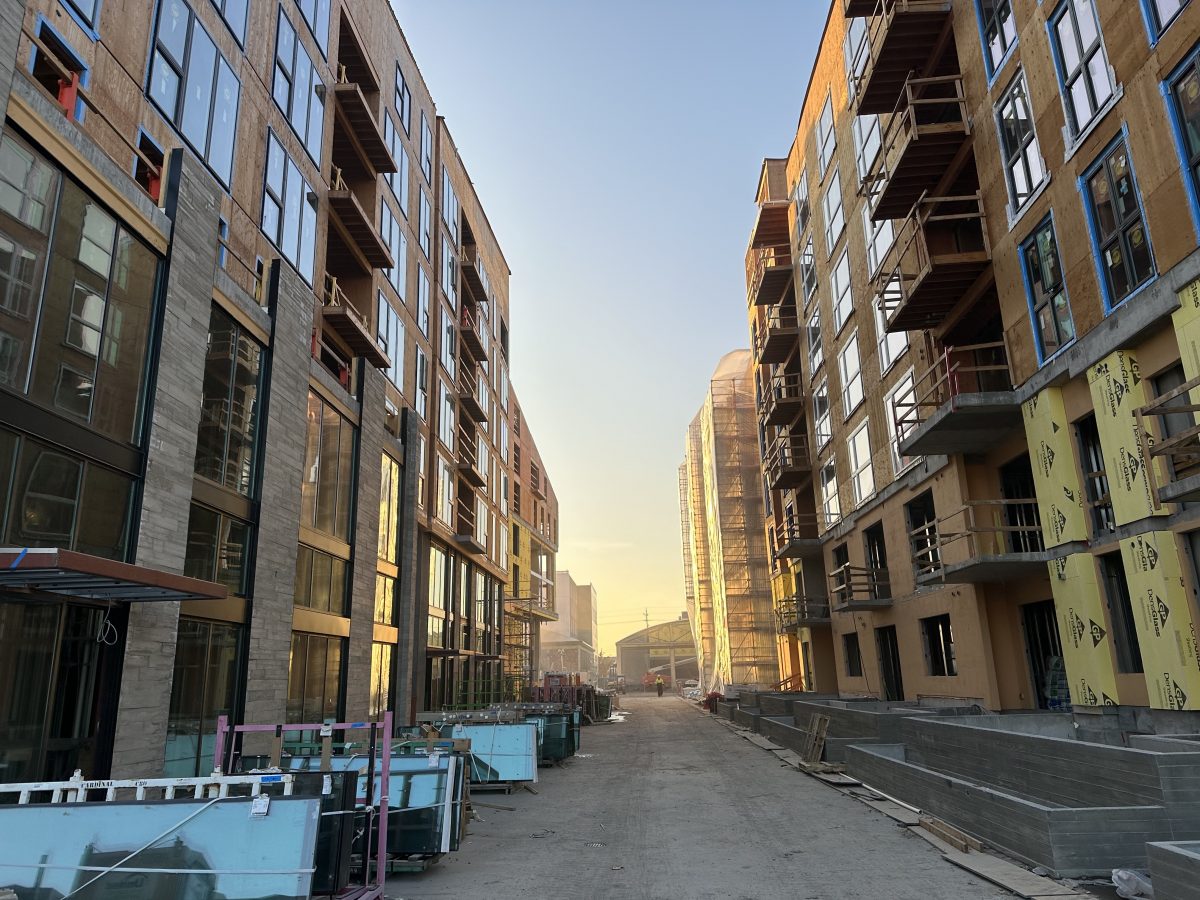 It’s not quite the Granary, and it’s not quite Downtown. But the teams responsible for developing a stretch between those two neighborhoods have quickly assembled a district that’s on its way to standing alone in Salt Lake City.

They call it the Post District, a new brand created precisely because it sits in an area that became left out and disregarded from other fabric in the city.

In a quick few years, the area between 500 South and 600 South and 300 West heading westward has risen from overlooked wasteland to a master planned district that brings life where there was largely none in recent memory.

In some city plans, this area is called the Grand Boulevards, an aspirational name from past planners who hoped one day to see the impact of state-owned highway infrastructure minimized, allowing the city to flourish in areas held back by 1960s-era car dominance.

Those state roads on three sides of the Post District act as veins of car traffic, with Interstate 15 performing the function of a heart pumping cars through an antiquated vascular system designed to fill office spaces Downtown with workers driving in from the suburbs in the morning and back out again at 5 p.m.

Left overlooked were dozens of acres of land just south of Pioneer Park on the center-west side of Downtown, places that are now filling with people looking to live, work and be entertained just outside the state’s most vibrant urban core.

Vacant land and warehouses have been redeveloped into a mix of retrofitted buildings and new mid-rises that now greet suburbanites as they enter the capital city by car from the west or move out from the east.

It’s largely thanks to work by a set of local developers and the area’s status as an opportunity zone, a designation created by a 2017 federal tax law that offers tax incentives to investors who spend capital gains on real estate.

BCG Holdings, a company owned by Brandon Blaser, is working alongside Sugar House-based Lowe Property Group, as well as Bridge Investment Group, on five of 10 new buildings that make up the residential portion of the Post District. Q Factor and Drumbeat, the teams leading the creation of Industry SLC to the south, joined BCG and Bridge to work on several others.

Rather than one-off buildings scattered across town, what stands out about the Post is the speed at which hundreds of new units and space for multiple on-site retail and commercial outlets is coming online in a concentrated area.

Traeger, the local wood pellet grill company, is planning to relocate its headquarters to a 95,000-square-foot retrofitted building on the southeast corner of 400 West 500 South, the former Newspaper Agency Corporation building.

Level Crossing Brewing is preparing to open its second location on the site, fronting a privately owned street dividing the district that the development teams have designed to function as a low-speed, people-first place to walk and shop.

Urban Hill, a franchise by the owners of Park City restaurant Hearth and Hill, has already opened up a high-end restaurant on the ground floor of a building called The Register, on the southwest corner of 300 West 500 South.

The Register has turned heads for two apparent reasons: it is among the first buildings to open in the district, and its ground floor shows the impact existing billboards had on the development.

Portions of the first four floors of the building’s east-facing facade are obscured by one of several billboards lining the outer rims of the block.

In fact, state laws are so favorable for keeping billboards in place that portions of the Post District were built around billboards that — whether they stay or are eventually removed — will have permanently altered the design of several buildings.

Its a nod to the recent history in this part of the city. Companies targeting the eyes of passing motorists lined 500 South and 600 South with massive advertisements that remain today.

BCG is working with the city, billboard executives and others to break a years long impasse on the design and location of what many consider a blight on the city. Despite cooperation with members of the mayor’s office, that work hasn’t yet led to change, and the billboards remain in place on the rim of the Post District.

The district also has yet to bridge the issues created by the surrounding roadways.

Paired with nine car lanes on 300 West, the Post District is effectively its own island. It requires a dedicated pedestrian to stroll south from Pioneer Park to enjoy the public and private amenities that are included in the Post.

As with any other island, that makes it all the more important to pack in amenities needed to make a visit enjoyable.

The buildings in the Post District are well-appointed with spaces that allow for sweeping views of Downtown and the Wasatch Mountains. Like many new urban buildings, they include things like fitness areas, rooftop pools and grilling areas.

But the Post doesn’t ignore the ground floors for people who choose to visit. In addition to Level Crossing and Urban Hill, Blaser said the group is preparing to announce the arrival of another new restaurant that will be the second U.S. location for the unnamed spot.

A coffee shop and three more unnamed food and beverage retailers will be announced soon at 400 Post House, a building that also has 203 residences above. 400 Post is the building that is perhaps most eye-catching, with its peaked roof lines mimicking the Wasatch Mountains behind it.

The district turns in on itself to avoid the unpleasantness of the surrounding roads and instead focus on an active street along Gale Street, which zig-zags near the middle while passing nearly all the retail spaces in the development.

A set of mid-block passages breaks up the one super-block into four smaller and more walkable ones.

The retrofitted buildings appear to have taken care to honor the history of the buildings that have survived decades of neglect and returned them to their former glory.

It’s a mix of uses and a mix of history, with new view corridors that culminate in the 328-foot tall Grand America hotel to the east and the grain silos to the west.

Those silos will be part of what is effectively an extension of the Post District west of 400 West, and part of a neighborhood also created by BCG and Lowe, as well as Catalyst.

A development that sought to bring affordable housing to the silos area just west of this Post District fell through, and all of the Post will be market-rate rentals with studios in the 801 Flats starting around the average rent for studios at just under $1,200 per unit.

Together, the developments will be what the Hardware District could aspire to be, just without the transit. They’ll be a rich mix of housing, workplaces and retail. Private and public spaces. Plenty of reasons for outsiders to visit without the air of total exclusivity and singular use exhibited by the Hardware.

Transit may be coming, however. While fixed rail is typically used as a means to attract dense housing, in this case the rapidfire pace of development in the Post and Granary districts may just be the catalyst to finally bring transit through.

Whether it’s an extension of Trax on 400 West or the transformative changes envisioned by the Rio Grande Plan, the private planners in this part of town may be patient enough to see what may be rather than capitalize only on what is today.

There is still more land to be developed as part of this new market-rate construction. The southwest corner of the main block and the block north of 600 South are being held for a future phase of redevelopment.

Together, those sites have enough space for over 150,000 square feet of office and retail development.