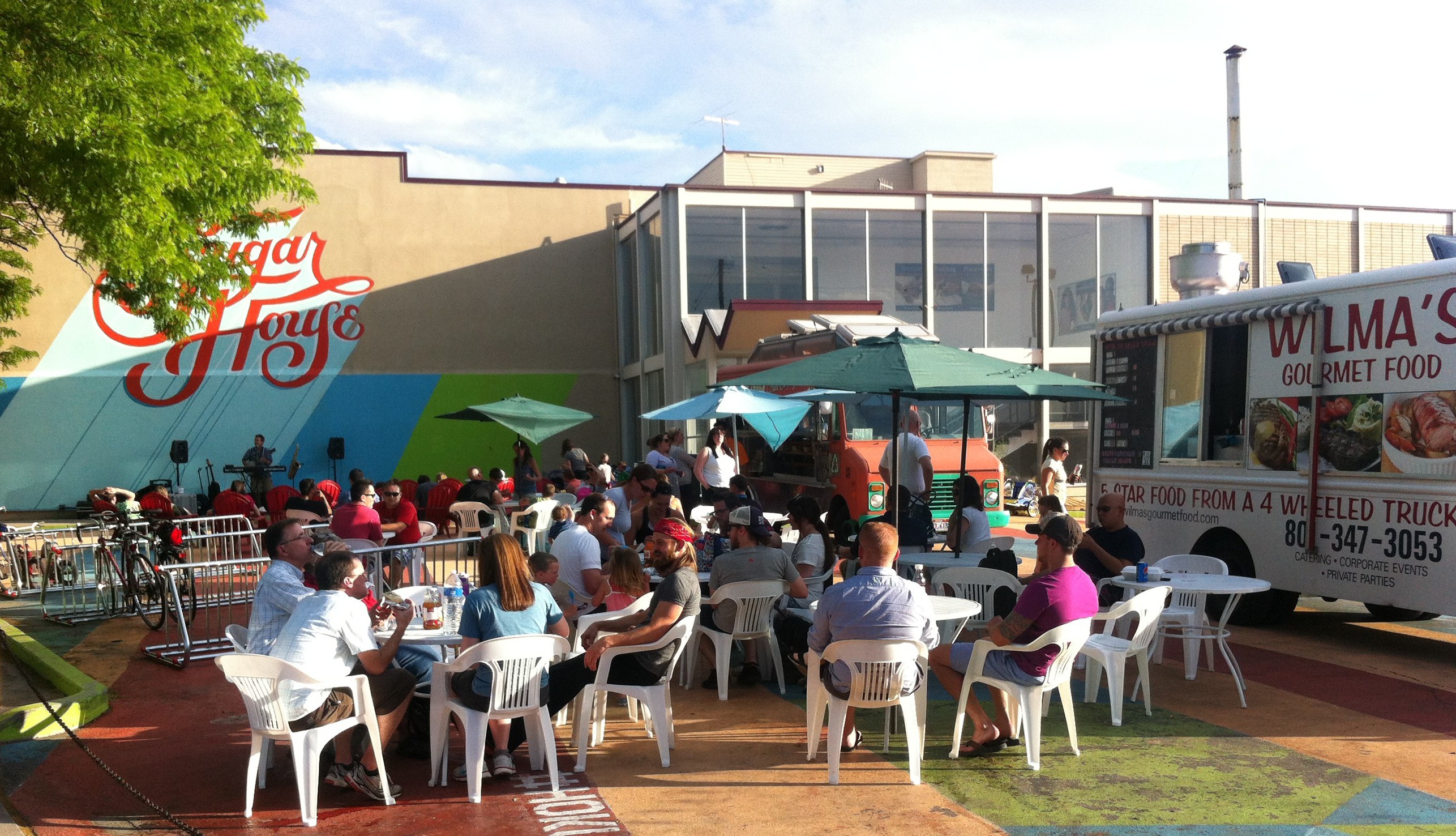 Sometimes all that is needed is paint and some active uses that attract people to convert an underutilized surface parking lot into a popular public plaza.   For the third year in a row, the concrete lot in front of the former Deseret Industries just off Sugarmont Drive in Sugar House will become the Sugarmont Plaza.

Sugarmont Plaza officially opens on May 11 with food trucks and live music by the local band, Bludgeon Muffin.  Salt Lake City officials and members of the Redevelopment Agency will open the night with a ribbon ceremony commemorating a new partnership with the Food Truck League (FTL), a local network of gourmet mobile vendors (food trucks).  The FTL will provide food trucks on a rotating schedule, for the plaza’s Monday food truck events.

The plaza originated as a tactical urbanism project designed to create a sense of place at the terminus of the then under-construction, S-Line streetcar.

“Once you’d get to the end of the S-Line your dropped in front of a vet clinic parking lot and a warehouse,” said Morris.  ” If you don’t know where you are, there is no destination.”

In 2013, urban designer Mark Morris, representing the Friends of the S-Line, and Amy Barry, of the Sugar House Community Council pitched the idea to the City of converting the surface parking lot on Sugarmont Drive, a block east of the Fairmont S-line station, into a public plaza.  The inaugural budget for the plaza was just over $12,500.

The first season had biweekly food truck events with live music.  The 2014 season expanded to include the snow cone shack and a weekly farmers market.  That same year, the friends of the S-Line created a protected bike lane along Sugarmont Drive using planters to separate bike and car traffic and blue paint as a visual guide for bicyclists.

Like the plaza itself, the bike lane’s planters and paint are intentionally temporary.  The next phase of the S-Line streetcar calls for the line to continue up Sugarmont Drive before turning north on Highland Avenue.

“The idea of the ‘lighter, quicker, cheaper’ is that you don’t have to spend years and millions to make change happen, you can do it quickly and cheaply but still have a big impact,” said Morris.

Sugarmont Plaza has arguably had a catalytic effect on new permanent public space in the neighborhood.  One block to the south of Sugarmont is the recently completed, Sugar House Monument Plaza.  A block north is a public plaza at the center of the Wilmington Gardens development, connecting Wilmington Avenue to Hidden Hollow and Sugar House Park.

“There are a lot of complaints about traffic in Sugar House,” said Morris.  “But if you can get out of your car, Sugar House is a great place to be a pedestrian with small blocks and great street engagement.”

The walkability of the Sugar House business district makes it an ideal location for food trucks that depend on foot traffic.  The Food Truck League approached the RDA earlier this year, about establishing weekly events.  The RDA selected the Sugarmont Plaza for the League’s first event.

The League launched earlier this year with the goal of enhancing the local Food Truck Industry by providing marketing assistance and building a network for mobile food vendors.

“Our League Members have put their passion into their work, and we are thrilled to support them and help them share that passion with the community,” said Francisco Terreros, the founder and co-owner of the FTL.

Terreros will join City officials at the ribbon ceremony to announce additional locations for future FTL events.  The League is expected to release an iOS app that will allow customers to locate nearby food trucks, access menus and track the locations of preferred vendors.

“Sugarmont Plaza has been so key for us, it has allowed us to establish our presence.  It is centrally located and we couldn’t have identified a better partner than Sugar House,” said Terreros.

Morris and his firm, Voda Landscape + Planning, are leading a volunteer effort to “paint the plaza,” May 16 at Sugarmont Plaza.  Anyone interested in volunteering can RSVP at the event’s Facebook page.