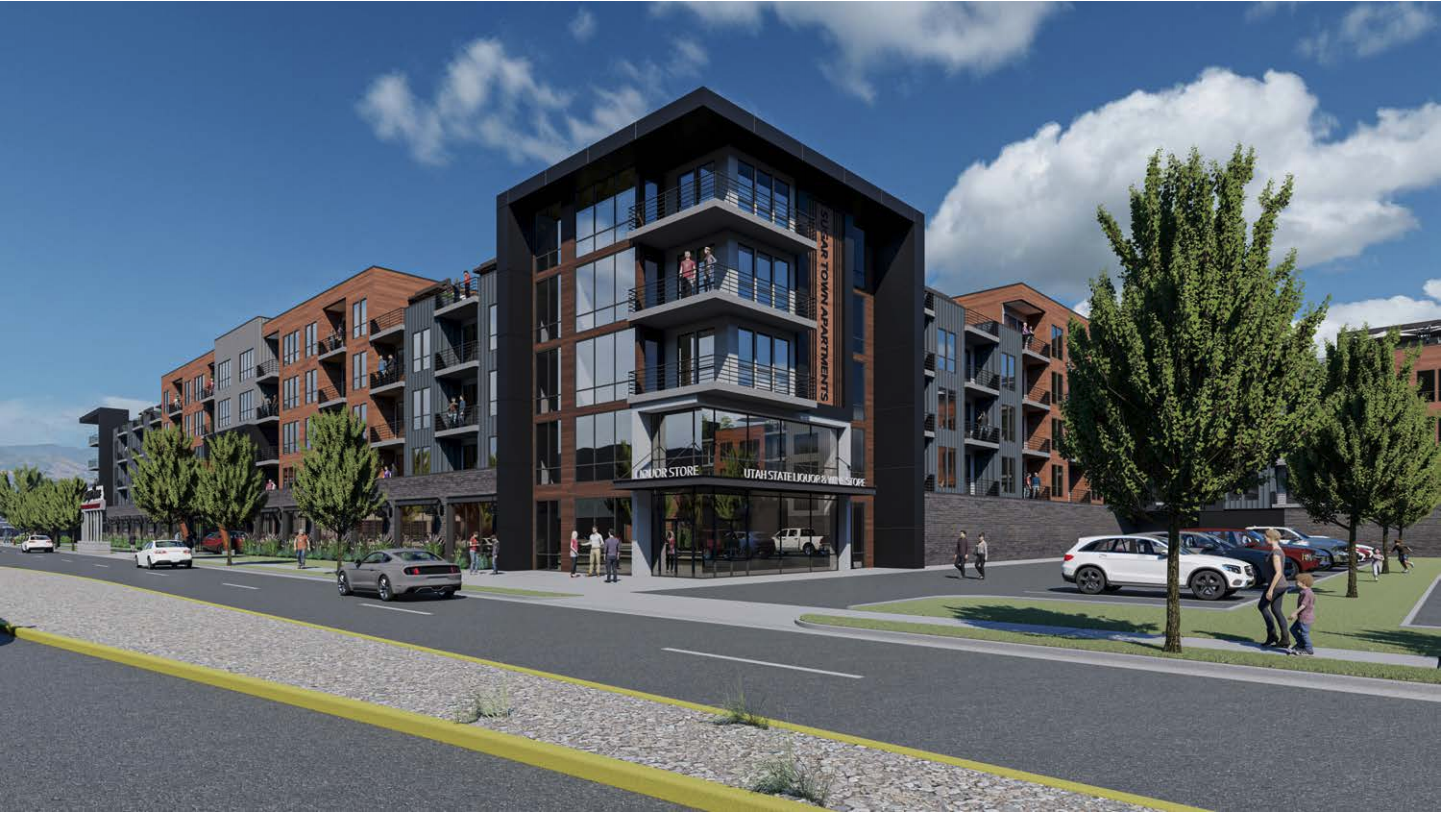 The city should extend the footprint of Sugar House’s Downtown zoning to include the 4-acre parcel that’s been home to a Nestlé plant, developers said in documents that reveal plans for the huge site in the western gateway to the neighborhood’s commercial core.

The zoning change would allow developers to add another 15 feet of height, up to 60 feet. They’d build what would be a five-story building plus townhomes between 800 East and 900 East on 2100 South, a site once home to Utah’s Snelgrove Ice Cream.

The developers say the added height would let them include a portion of apartments at slightly below market rate, while adding hundreds of studio, one- and two-bedroom, market-rate apartments to one of the fastest-urbanizing neighborhoods in Salt Lake City.

The Sugar Town apartments would include 290 new units. The developers are asking the Planning Commission and then City Council agree to rezone the property from commercial to CSHBD2 zoning. That would include fewer parking and setback requirements and permission for more height and density.

The zoning change “allows for 60 (feet) or an additional floor of residential units,” a representative for John Thackeray and Boo Purcell, the developers, wrote in the application. “We propose that the 53 additional units afforded through this rezone would create an opportunity for 53 units in the facility to be rent-restricted” to 80% AMI.

That rent would be affordable for people earning just shy of $50,000 (or $56,250 for a couple), according to the U.S. Department of Housing and Urban Development.

The developers didn’t immediately respond a request for more information about the proposal. But here’s what we know from the initial documents.

What we know at this point

While the documents don’t detail every aspect of the design, renderings show a long facade fronting 2100 South split by a parking garage entrance that lines up roughly with Windsor Street (840 East).

The rendering was submitted by Sugarhouse Village, LLC, but the rendering shows a sign proclaiming: “Sugar Town: This is America’s finest apartments” (sic).

The typo stems from the old Snelgrove Ice Cream sign, which boasted “This is America’s Finest Ice Cream Store.” The existing sign, which no longer has the Snelgrove references, would be repurposed and affixed next to Sugar Town’s parking garage front entrance, the rendering shows.

The rendering depicts a retail store — displayed in the documents as a state liquor store — on the ground floor fronting 2100 South. A leasing office and fitness room are also shown fronting the street.

The developers own a significant portion of the block, but not all. They own the center of the block facing 2100 South between 800 East and 900 East. They also own the entire southern boundary fronting Commonwealth Avenue.

The rendering appears to show new buildings stretching an entire Salt Lake City block on the south side, fronting Commonwealth Avenue. The centered, five-story building would be flanked with four-story townhomes at 900 East and Commonwealth and parking garage at 800 East.

While that orientation wouldn’t add life to Commonwealth, it wouldn’t function much differently from the existing warehouse. Commonwealth itself functions largely as an alleyway, with single-family homes on Elm Avenue turning their backs on the existing blank wall in the rear of the Nestle plant.

The building would include 283 parking stalls, just shy of one per unit.

It’s not clear just how long any of the building’s facades are. Our estimate based on the drawing is about a 300-foot north and south facade plus about 100 feet each for the townhomes and parking garage on the parcel’s south end.

Sugar House has been working to set designs standards that limit the scale of buildings to promote more walkability. The standards would set a maximum facade length of 300 feet with other design elements to break up the building.

Builders in the neighborhood and across the city have had a tendency to erect apartments with long facades that can detract from the on-street experience, while they focus on amenities for tenants inside.

A proposed rezone would first head to the Planning Commission. Check back for updates.