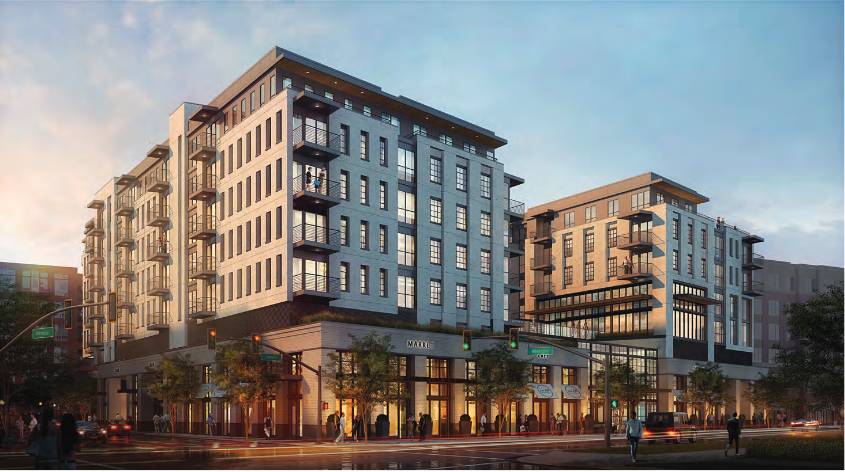 A massive fire at a building under construction in the core of Sugar House has significantly damaged Lowe Property Group’s Sugar Alley, and it appears the project that has taken years to get to a point where it was nearly completed will be demolished.

Police blocked off Highland Drive between 2100 South and Sugarmont Drive all day Wednesday, and news crews awaited in sleet and rain on Wednesday evening for the arrival of a crane to begin demolishing the building’s north end.

Given the extent of the damages, it appears likely that all of the building, which was slated to bring 186 residences and 16,000 square feet of ground-floor retail space early next year, has been destroyed.

Neighbors as far as a mile away reported finding charred chunks of building debris landing around their homes as firefighters battled the four-alarm, overnight blaze.

Residents in nearby buildings were temporarily displaced by the fire, which appeared to start overnight on the north side of Sugar Alley.

“We are devastated by the major fire that occurred last night at the Residences at Sugar Alley,” said Ron Cole, a principal at Eight Bay Advisors, which financed the project for $60.3 million, in a statement to Building Salt Lake.

Neither Cole nor Lowe Property Group provided information about the future for the site. The cause of the fire is still unknown. Cole thanked first responders and said the group would support the investigation.

“We recognize that this fire has temporarily displaced residents and businesses, and we remain very concerned for the well-being and safety of everyone affected,” he said. “Those conducting the fire investigation and remediation efforts (including our team) have full access to the site, and we hope that our neighbors who have not yet returned to their homes will be permitted to do so safely and as soon as possible.”

The fire closed multiple businesses as well, including Whole Foods immediately across the street.

The building’s design had actually been altered after input from the Fire Department, according to a review of the staff report for the project.

The southeast portion of the facade was stepped back due to conflicts with the Fire Code, the report notes. Lowe had asked for a full reduction of the step back on the building’s northeast facade.

The step back away from Highland Drive — a design feature that seeks to create a more appealing pedestrian environment at street level — was reduced so firefighters could fight any eventual blaze from the air.

Lowe also met with the fire department and got approval to reduce the number of fire access lanes provided from two lanes to one lane, according to the staff report.

This was allowed under international fire code because the building was set to have a fire sprinkling system when complete. It’s not clear whether that system was in place at the time of the fire.

Representatives from Lowe Property Group haven’t responded to a request for comment.

The building was set to be 85 feet tall, have 16,000 square feet of retail and be a mix of studios, one- and two-bedroom apartments.

Builders worked to get the white brick facade onto a good portion of the building when last seen. The inside is largely unfinished.

Even if fire walls were in place between the more complete southern portion of the building and the incomplete north end, those walls are designed to slow the spread of fire to allow people to escape. They can’t withstand an overnight blaze of this magnitude, so the fire likely spread to all floors throughout the structure.

The building was set to be finished early next year and had already already lined up Park City-based restaurant Hearth and Hill for some of the retail space.

This is only the latest in a string of building fires in Sugar House in recent months, and photos from the scene this morning show significant damage has been done to the building.

In June 2021, a three-alarm fire damaged a building near Brickyard. That same month, an arsonist destroyed an office building near Fairmont Park.