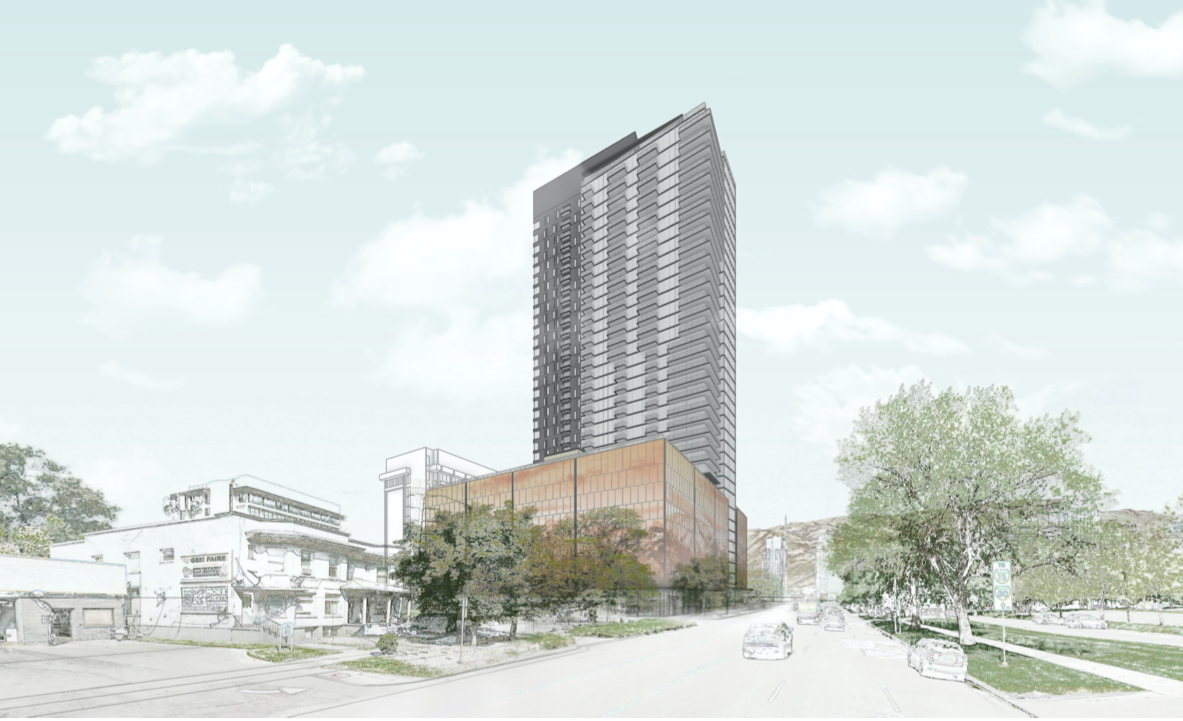 A long-neglected part of south Downtown thanks to highway-like conditions on 600 South and S. West Temple is getting a major makeover thanks to redevelopers of the Red Lion hotel parcels. They recently revealed more details about their master plan for the northern half of the block that also hosts Brewvies Cinema Pub.

The biggest splash is made by a proposed 35-story residential tower on West Temple just south of a Sinclair gas station, one of two on the Red Lion’s 600 South block face.

Other interesting details pop out of a conceptual site plan from the design review proposal recently submitted to the city by Denver-based McWhinney Real Estate Services, representing an Opportunity Zone fund registered in Delaware.

Other masterplan outlines for the site include a remodel and reopening of the nine-story Red Lion Hotel, which has restaurant space on the ground floor (formerly home of the Olympus Café).

More housing – including a 35-story tower

The residential components of the mixed-use development, which covers approximately four acres, are substantial.

The existing 13-floor tower to the south of the original concave-triangle Red Lion structure is nearly ready for occupancy as rental units.

The new 35-floor, 380-ft tower on West Temple will rise over a podium that includes a street-facing “activated” ground floor plus seven stories of parking.

The seven floors of parking, on top of which sits an amenity deck, will hold 605 car stalls and 29 bike spaces.

Pedestrians along West Temple will encounter 223 ft of façade, which exceeds the maximum 200 ft for the D-2 zone. It is one of several exceptions that developers McWhinney and architects Solomon Cordwell Buenz are asking to D-1 and D-2 zoning requirements.

A lobby for residents consumes just over 83 ft of that frontage, on the northern half of the building. The southern half will offer 126 ft of retail street front, part of approximately 6144 sf of space for a retail use. Garage access makes up the remainder of the façade.

Other outlines of a master plan for the site include a new office building designated for life sciences on the western edge, fronting 200 West.

No further details were provided on that phase of the project, except for the 1.88 acre size of the parcel currently reserved for the structure.

Developers are likely to submit a planned development proposal for the rest of the site. That will require them negotiate with the city about the nature of two mid-block streets in the site plan.

Architectural sketches currently designate the N-S and E-W streets as “private.” The applicant’s narrative acknowledges the city’s mid-block walkway plan while claiming that “The larger masterplan of which the Project is a part contains both pedestrian and vehicular connections that conform to the City’s plan for the downtown area.”

Whether city planners and the Planning Commission will agree to private streets without public easements is to be determined, as well as the applicant’s requests for exceptions to maximum façade length, street front entrance requirements, and extra D-1 building height.