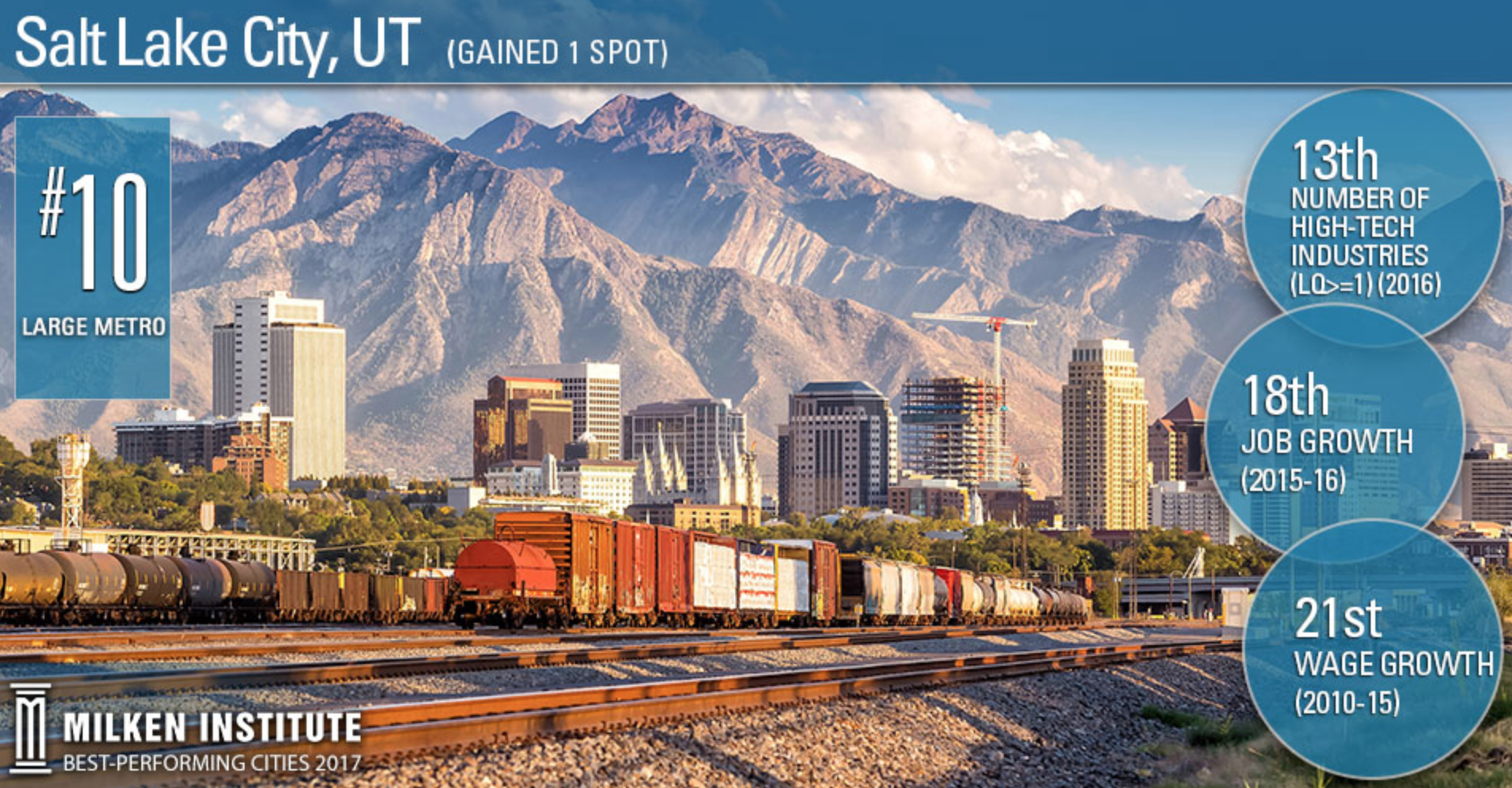 After a two-year hiatus, the Salt Lake City Metropolitan Area has again cracked the Milken Institute’s Best-Performing Cities 2017 Index’s top 10 for the country’s large metro areas (metros with over 250,000 residents).  Two Utah metro areas bookend the top 10 with Provo-Orem coming in at the number one spot and Salt Lake rounding out the top 10 coming in at 10th place.  The last time the region landed in the top 10 was in 2014 when it came in sixth.  In 2015 and 2016 the city came in 11th.

“Utah’s strong entrepreneurial spirit and business-friendly environment allow companies to grow in communities big and small,” said Utah Gov. Gary R. Herbert in a statement. “As we invest in our skilled workforce and diverse economy, we continue to improve job opportunities and quality of life for residents statewide.”

The Milken Institute Best-Performing Cities Index has been published annually since 1999.  To determine the rankings, the nonprofit, nonpartisan think tank uses fact-based metrics in nine categories to evaluate the relative growth of metropolitan areas.  Metrics include growth in jobs, wages and salaries, and technology output over time. The index also measures high-tech fields whose concentrations in a metropolitan area are higher than the national average.

Salt Lake scored high for growth in jobs and wages and for its large tech presence, but the report’s authors note that there are some areas of concern.  The author’s cited a tight labor market as a potential impediment to future growth.  Utah’s low unemployment rate is a sign of a healthy economy but it also means fewer people are looking for employment as the time spent on attracting talent could limit tech expansion.

In addition to tech growth, the authors note that the growing need for workers will continue to increase the demand for housing which the report’s authors note will lead to significant job growth in the construction industry.  As with the tech industry, construction companies have had to navigate a tight employment market with many companies struggling to fully staff their crews.

The first place Provo-Orem Metro led in job growth between 2011 and 2016 and in Gross Domestic Product growth in the tech industry.  As with Salt Lake, the report’s authors cited the state’s tight labor market as a potential impediment to economic growth.  This is the Provo region’s first time topping the Milken index.  Last year the metro came in second, its previous peak before this year’s ranking.  The Provo-Orem metro has ranked among the top 10 metros every year since 2011 when it jumped from 25th to ninth.

The Milken Institute evaluated 400 regions designating around just under 200 as large metros and the rest as small metros, between 50,000 and 250,000 people.  All of Utah’s five metro areas ranked in the top 30 (top 15 percent overall) best performing cities in the large and small metro categories.  The Ogden-Clearfield metro ranked 28th on the index.  For small metros St. George ranked second just behind first-place Bend-Redmond, Oregon and Logan ranked 24th.