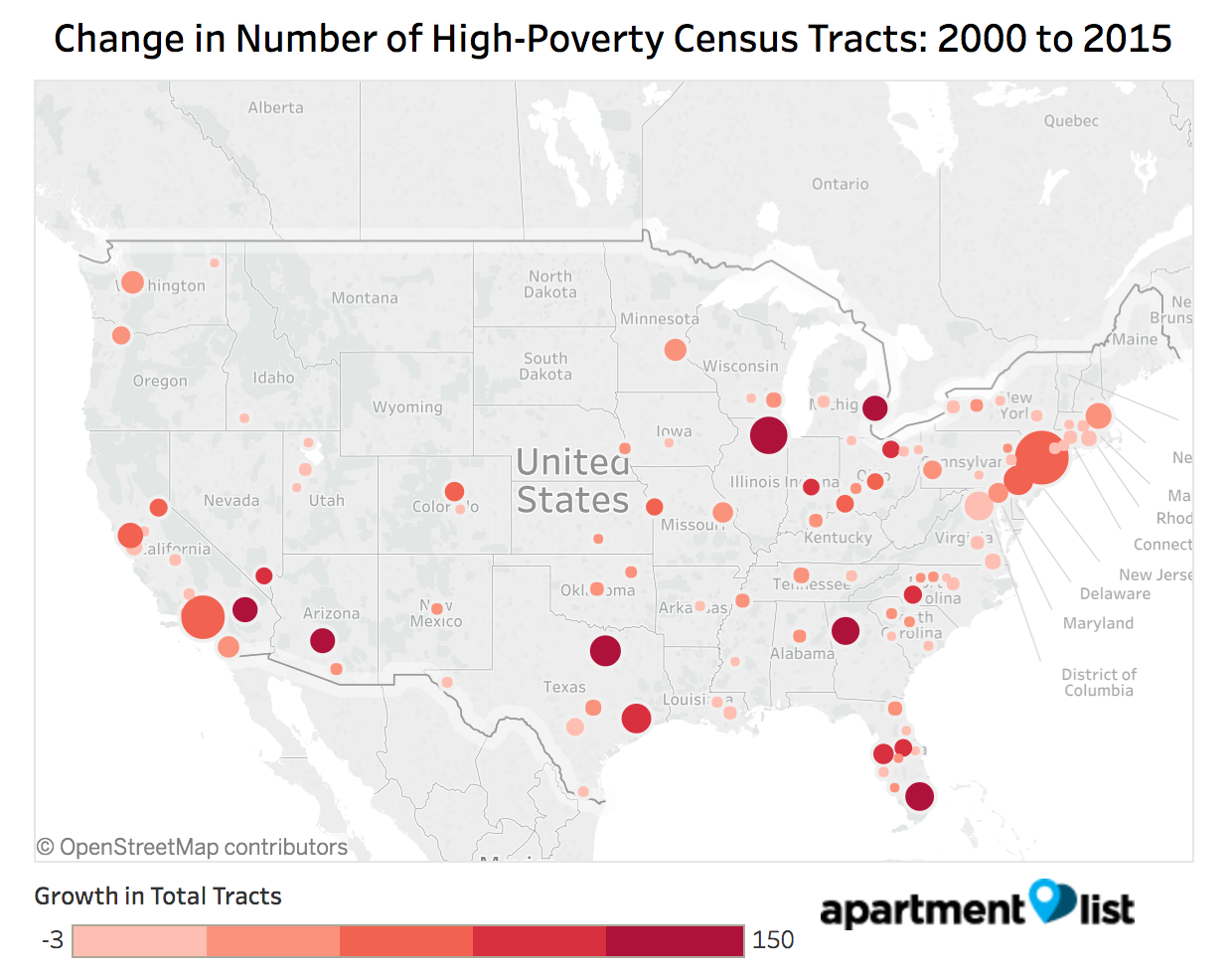 Across the U.S. the poverty rate is rising, but unlike in previous decades, poverty is moving away from city centers and to the suburbs.  Poverty rates in Utah are also climbing but unlike the national trend, poverty in Salt Lake remains urban-centered.

According to a Joint Center on Housing Studies at Harvard University, between 2000 and 2015 poverty increased in low-density, medium-density and high-density metropolitan areas.  In the same 15-year time period, in 85 percent of metro areas, the percentage of residents living in poverty in the urban centers dropped.  Nationally, the share of residents living in poverty in our nation’s urban centers went from 51 percent in 2000 to 43 percent in 2015, despite the fact that the poverty rate increased from 11.3 to 13.5 percent in the same time period.

While nationally poverty is becoming less urban-centered, in the Salt Lake metro area suburban poverty has gone down since 2000.  According to a report by Apartment List, an online retail marketplace, based on data from the Harvard study, the share of residents living in poverty in low and mid-density neighborhoods dropped by 11 percent going from 49 percent in 2000 to 38 percent in 2015.

Despite Salt Lake’s growth in poverty in high-density neighborhoods, the Provo and Ogden metro areas saw either a reduction or a minimal growth in the percentage of residents living in poverty in the urban centers.  Provo experienced an increase of 2 percent between 2000 and 2015, while Odgen saw a significant decrease with most of its poverty moving to the suburbs.  Ogden’s numbers could be skewed by the fact that up until 2005, the Ogden metro area was part of the Salt Lake metro area.

Data gathered by the University of Utah’s Kem C. Gardner Policy Institute shows that, in Salt Lake County, lower median incomes are concentrated in higher-density neighborhoods.  The data is based on the 2010 U.S. Census and shows that with the exception of the Avenues, East Bench and Sugar House neighborhoods, incomes in Salt Lake City proper are significantly lower than in most other parts of the county.

Poverty is Salt Lake may still be very urbanized, but county-wide Salt Lake County has the second lowest poverty rate of the state’s six counties with populations over 100,000.  Only Davis County has a lower poverty rate.

One factor for Salt Lake’s numbers could be that the region is just now experiencing the return to urban centers that begin in other metros during and shortly after the Great Recession.

Based on the Harvard study, in all but 12 metro areas the population living in high-density poor neighborhoods increased while the share of residents living in poverty in these neighborhoods decreased.

Salt Lake City has added several hundred new luxury and market-rate residential units since 2015 and will have several thousand more in the next few years.  The city is adding as many multifamily units and the rest of the Wasatch Front combined, meaning that while Salt Lake County has kept most of its poverty centralized, it too may begin to spill out to the suburbs as living in the urban center becomes more expensive.