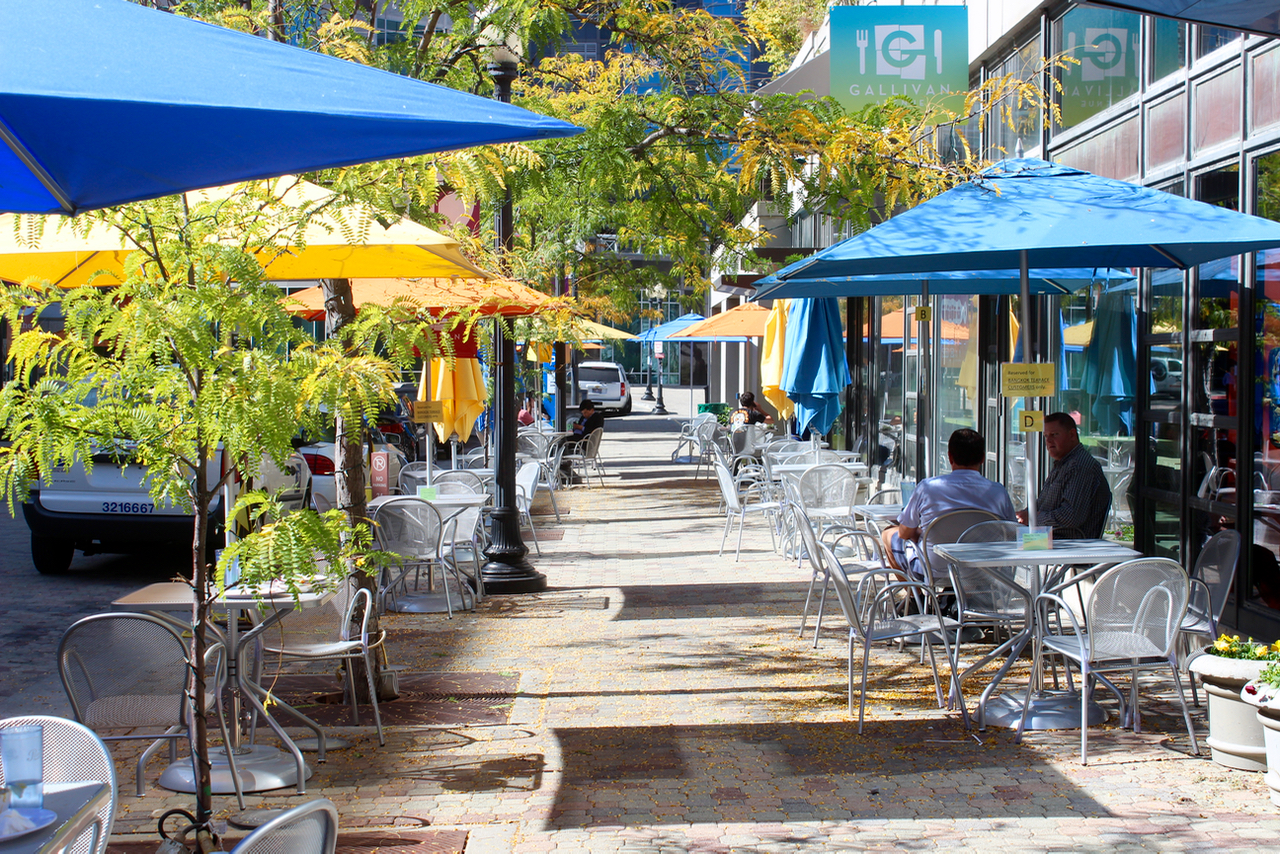 Besides responding to COVID, earthquakes, and anti-police protests in her first six months in office, Salt Lake City Mayor Erin Mendenhall is also launching several pilot innovations in public space that have the potential to transform the city.

The city’s “Stay safe, stay active” open streets program, where 10 neighborhood streets have been closed to thru traffic to allow people to enjoy the space without speeding cars, has been in place since April 23.

Late last week the Mayor issued her 11th Emergency Proclamation of 2020, concerning business activity outdoors and in the public right of way.

It is meant to facilitate retail businesses and restaurants using their side yards and parking lots, as well as sidewalks, park strips, and even parking spaces in the public right-of-way.

Both of these moves are by law temporary. But they seem very much in concert with the mayor’s larger agenda, as expressed in her inaugural State of the City speech and a recent conversation with Utah Business magazine about creating the city of the future.

Dining and retail moving outside?

Last week’s emergency proclamation on outdoor business activity allows a business to use its existing parking lot and yards for commerce, previously forbidden, and abolishes parking minimums for getting an outdoor dining permit.

It also allows businesses to apply for a permit to operate in the public right-of-way. Requests for the park strip and parking spaces abutting the business’ property will be considered, Lindsey Nikola, the Mayor’s communications director, told us.

All outside business permit applications will get automatic priority status, the city promises. Interested businesses should email the city at real_estate@slcgov.com.

What’s the Mayor’s vision for urban design and development?

Mayor Mendenhall’s is a “City that looks through a lens of equity and sustainability to every aspect of our future” she told Utah Business’ Elle Griffin.

She praised her staff, including planning director Nick Norris, who joined her on the panel.

They’re excited to “find ideas from other cities and innovate on those like the open streets program,” the Mayor expressed with enthusiasm.

“We’re hearing from a lot of people who are saying, ‘hey, we want these things to stay’. But she noted, “We haven’t made any of those commitments yet.”

Mayor Mendenhall’s time on the city council was highlighted, from a smart growth point of view, by her commitments to expanded public transportation and affordable housing. She touted the city’s Frequent Transit Network, offering 15-minute or less service along key west-east routes in the city.

Rail on 400 West in the Granary, a tech corridor on 300 West from the Marmalade to Ballpark, a new concept for the RDA’s Depot District properties, and the Fleet Block were all on the Mayor’s lips.

She talked passionately about “building-in affordability and economic access to that liveable infrastructure of the future that we have, in a sort of spotty way, around the city outside the downtown core.”

In her State of the City speech in early March, Mendenhall noted that over 2100 affordable housing units would be built in 2020 in the city, and promoted zoning changes for shared housing (SROs) and tiny homes for their contribution to alleviating the housing crunch.

Norris spoke of the ideal of a “15-minute city,” where people can live, play, and work, in an increasingly remote world – within 15 minutes without a car.

He says Salt Lake could “take 20% of the cars off the road by increasing bike usage.” Noting it’s a lofty goal, he emphasized that other places have succeeded that were auto-oriented 30-40 years ago, like Copenhagen and Amsterdam.

“They set goals, they stuck to it, and they’re prospering as a result.”

The Mayor was asked by host Elle Griffin whether it is a priority “to get more cars out of the city.”

“Oh yeah.” The mayor responded. “Great cities across the world are not car-based in their entirety, they’re multi-modal.”

Norris expressed his affinity for Barcelona’s “superblocks,” which allow car thru traffic only on the perimeter of micro-neighborhoods. Salt Lake City’s grid and scale is particularly suited for such adoption, he noted.

The Mayor finished her comments to Utah Business by bringing her administration’s main themes and priorities together.

“We have to get our hands into the issue that the average household spends 20% of its income on transportation costs right now. We’ve got multi-car families, multi-car couples in Salt Lake City because that’s kind of what you have to do to get around. We gotta undo this. We have to make transportation accessible to all our residents.”