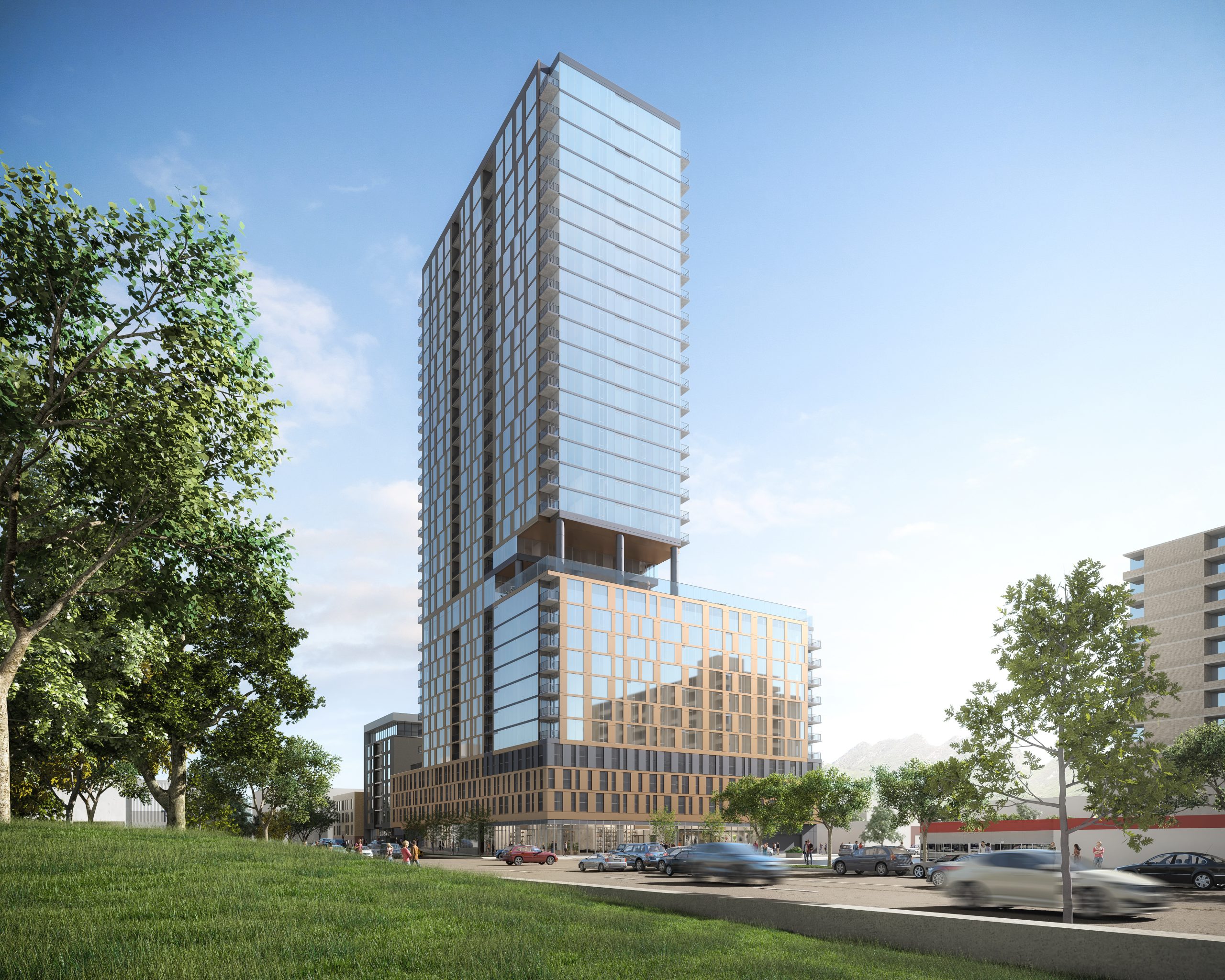 Salt Lake City’s Downtown has long since entered a residential building boom, and we now know details about the next project that will add to the city’s rapidly changing skyline.

Retailers in the existing two-story building on the northeast corner of 200 East 300 South told us months ago they faced eviction by this summer. But most details about what would replace the existing building in the Downtown zone have been unknown until now.

The tower that will replace the existing Broadway Place will be 31 stories tall. It will bring 359 residential units to the area on 26 of the 31 stories, leaving 5,800 square feet of space for ground-floor retail and 359 parking stalls on four stories above ground.

While the new tower doesn’t have a name, we’re calling it the Worthington tower. That’s the registered name of the three developers building another skyscraper on the capital city’s skyline.

The Worthington tower “builds on the vision of community leaders who developed the goals of programs like ‘Downtown Rising’ and is one step forward in ensuring Salt Lake City remains the primary cultural, financial, legal and government center of Utah,” Matt Lusty, a representative of the group, told Building Salt Lake on Wednesday.

It will continue two ongoing trends Downtown: new, skyline-altering skyscrapers, and an impending swell of people living in the city center.

With the newest addition, nearly 3,000 units — space for perhaps 5,000 or more people — are either under construction or have recently been completed in the Downtown area.

Salt Lakers should also get used to the sight of cranes on the skyline that will be replaced by permanent, tall buildings.

The city is growing up.

Salt Lake City has a handful of buildings over 200 feet tall, but historically they’ve been built few and far between.

It’s been five years since developers finished 111 S. Main, the 23-story tower that’s home to the Eccles Theater. It’s been a decade since the 23-story Regent opened in City Creek.

That cadence is set to change quickly.

While the projects are spaced out, Salt Lake City’s skyline will grow with a number of towers started within a year or two of each other. It’s safe to say it’s rare to have this many skyscrapers under development at one time, especially given the amount of high-rise residential units being built at one time.

High rises at some stage of development

The group building Worthington tower on Broadway isn’t sure how long it will take to build, but it plans to start the process this summer.

At 335 feet, the new residential tower will sit in the top 10 of the capital city’s highest. (Kensington Tower will become Utah’s tallest when built.)

Buildings on corner parcels within the D-1 Central Business District zone don’t need to undergo design review if they meet the zoning requirements and aren’t taller than 375 feet.

Once built, the Worthington tower will add a mix of studios, one-bedroom, two-bedroom and three-bedroom units.

What about existing retail?

While it will make new space for retail, the new building will displace five local businesses in the existing Broadway Place building.

The displacement will add to the city’s angst around loss of existing cultural icons like the nearby Ken Sanders Rare Books, which has long foretold his removal from Downtown.

Another string of businesses fronting Broadway on the northwest corner of 200 East, including a unique furniture store, antique store and rug gallery, among others, also faces likely displacement, as the building is owned by a developer working on plans for redevelopment.

“New downtown residents want and need varied and vibrant retail,” said Dee Brewer, executive director of the Downtown Alliance. “This is a paradox in that the demand for downtown residential living is one of the market pressures on downtown retail. Land is scarce and prices are going up.”

Rents are rising, Brewer said, and some residential development is displacing local retailers.

The Downtown Alliance, an extension of the Salt Lake Chamber of Commerce, said it was meeting with the Worthington developers to talk about plans and sparking a working group to try to help displaced retailers find alternative locations in the area.

“We want to attract and retain vibrant retail downtown,” Brewer said. “People who move Downtown are typically attracted by the ‘15-minute city’ — the idea that one’s work, nightlife, shopping, etcetera are all within a fifteen-minute walk from your door.”