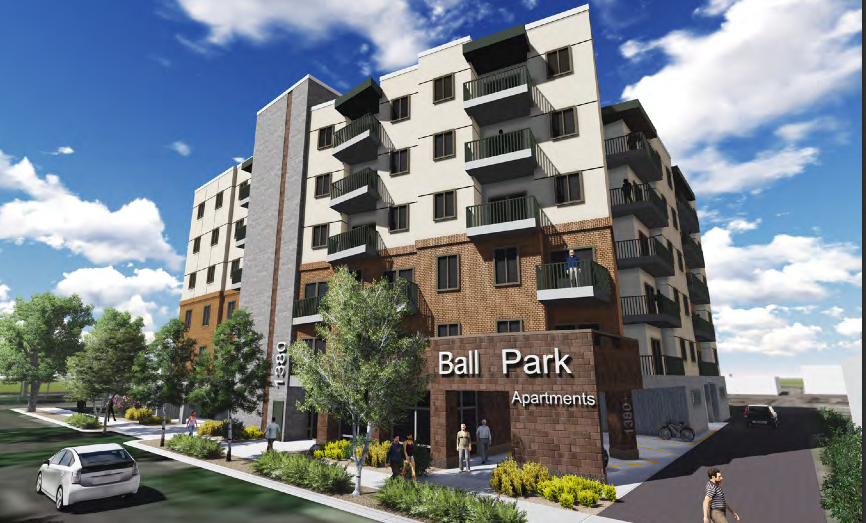 Smith’s Ballpark was built twenty years ago with the promise of new development to follow.  Two decades later the neighborhood surrounding the ballpark, at the corner of 1300 South and West Temple, is beginning to see that promised revitalization with new projects in the works like the Ball Park Apartments.

The Ball Park Apartments is a 6-story, 62-unit multifamily development reserved for residents over the age of 55 years.  The development includes a 33-stall parking garage.  Amenities include a community room, kitchen, outdoor space, fitness center, computer room and guest lounge.

The development will be within a block of the Ballpark TRAX station and Smith’s Ballpark and will replace a vacant lot at 1380 South West Temple.

The Salt Lake Planning Commission approved a zoning exception from the 30 foot rear-yard setback allowing the development to maximize lot space with a zero foot setback.

According to the project’s architect, Ryan Mackowiak, a rear-yard setback is unnecessary because, “the views of the surrounding properties at the rear of the site are of blighted and vacant buildings, broken asphalt, garbage, and abandoned automobiles and thus of no aesthetic value” and could create an unsafe environment for residents.

The Ballpark neighborhood has the potential to become one of Salt Lake’s most vibrant and walkable.  The neighborhood has not only the ballpark, but easy access to the freeway, proximity to downtown and a TRAX station that has trains passing every few minutes.

There is ample blighted, vacant and underutilized land surrounding Smith’s Ballpark available for development.  The Ball Park Apartments will be a taller and more dense development than is typical in this neighborhood, especially along West Temple.  By building a six-story apartment building on a small lot, the project serves to be a catalyst for similar developments in the neighborhood.