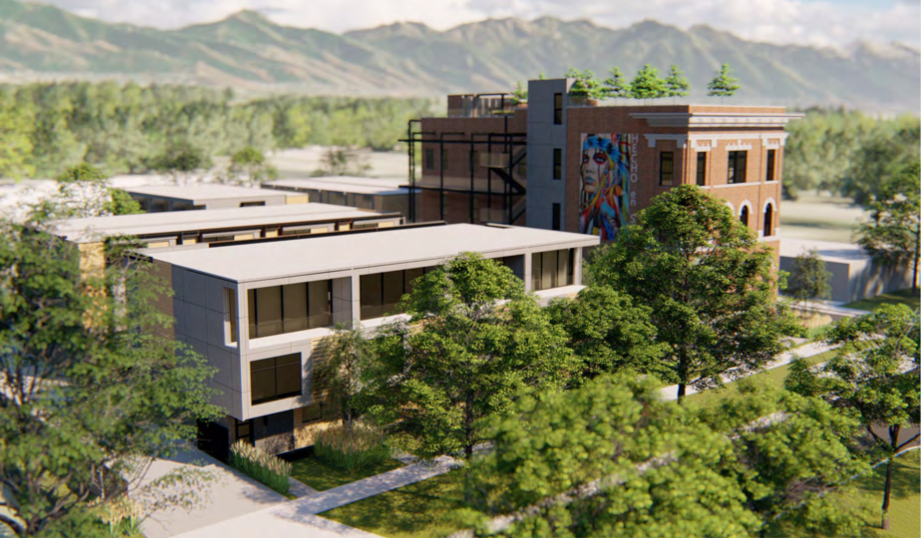 The Salt Lake City Planning Commission recommended approval last week for an upzone and master plan amendment in the heart of the 9th & 9th neighborhood for a 23-unit townhome and historic rehabilitation project.

The commissioners’ 8-1 vote in favor of Clearwater Homes’ planned development came in the face of opposition from neighbors and the local community councils. Most of the area had been downzoned to R-2 in 2015 with participation of the neighborhood.

The 3-story, 58-ft Telegraph Exchange building at 847 S. 800 E. dates from 1911, when it served as the nerve center for local operations of the Mountain States Telephone and Telegraph Company. In the twenty years before Clearwater bought it in 2011, it was owned by the LDS Church and used as a warehouse.

The building is not listed on the National Register of Historic Places nor in a national historic district – thus not eligible for federal tax credits that would help fund restoration.

The Telegraph Exchange building is on the western side of the Smith’s grocery store block, which was rezoned for the then-local grocery store chain in the 1980s. Nearly half of the 10-acre block was demolished for the big box and parking lot.

The south side of the block hosts some of 9th & 9th’s premier pedestrian-scale storefront retail.

If the zoning and master plan changes pass the city council, Clearwater will “preserve and restore” the Telegraph building’s 16,000 sf of unreinforced masonry, transforming it into 6 lofts. It will also build 17 townhome units on the property. The 17 3-story townhome units will be “tactically placed” in 4 discrete structures on the .79 acre property.

Clearwater’s Micah Peters also owns the 2 residential structures at 833 S. on the lot to the north (with at least 4 viable dwelling units). At purchase in 2011, both properties were zoned RMF-45. Today, the northern parcel at 833 S. with the two homes is zoned R-2 and the Telegraph building remains at RMF-45.

If developed by right under the current RMF-45 zoning, 16 units could be built on the lot of a demolished Telegraph Exchange building. The northern property would support two units, ironically fewer than currently exist.

Clearwater and MJSA Architects’ 23-unit design generally received positive reviews from members of the commission. While Commissioner Crystal Young-Otterstrom wondered whether the contemporary townhome style would complement the established neighborhood, Peters pointed to the building to the north of his R-2 property, a new modernist home, as well as other eclectic structures in the immediate vicinity.

Both the East Liberty Park Community Organization (ELPCO) and the East Central Community Council sent letters expressing their disapproval of the project, in particular the rezoning of the two homes at 833 South.

Letters in opposition and support were received by the planner on the project, David Gellner. Most in opposition expressed distress that the city would disregard neighborhood self-determination by overturning the recent downzone of the 833 S. property to the north.

City Home Collective’s Cody Derrick, who lives in the modernist home to the north of the 833 S. property, submitted a letter of opposition through his attorney. “Of major concern to Mr. Derrick is the density of the Proposed Development and negative impact to his home.” The planned development “is a dramatic change from the current zoning and not something Mr. Derrick anticipated when purchasing his home.”

In the 2013 rezoning, all lots with existing multi-family structures (including the Telegraph Exchange building), were allowed to keep their existing zoning. One of the intents was to avoid creating non-conforming properties. (Disclosure: the author was an advocate for the downzoning initiative while representing the area on the city council in 2013).

The planning commission was pretty clear that preserving and restoring the Telegraph Exchange building was the precondition for their positive recommendation of the zoning and master plan changes and approval of the planned development.

The developer, for his part, insisted that “the added density of 5 more residential units associated with our applications will afford us the economic capability to preserve the 16,000 square foot historic building. In the event we are not successful in gaining the added density, it may be necessary to demolish the historic building and simply use the existing density of 18 new structures.”

Considered an “anchor” and “landmark” for the block (planner David Gellner), the Telegraph Exchange building will see preservation and rehabilitation if the city council agrees with the planning commission. Commissioner Brenda Scheer summed up the majority opinion as she prepared to make a motion to approve Clearwater’s proposals: “I am concerned that if we don’t approve something like this, if we stick to the ‘as of right’, that the Telegraph lofts building will be lost.”

Commissioner Jon Lee concurred. “When you look at sustainability, one of the more sustainable things is when you reuse the building rather than to just tear it down and send it to the dump.”