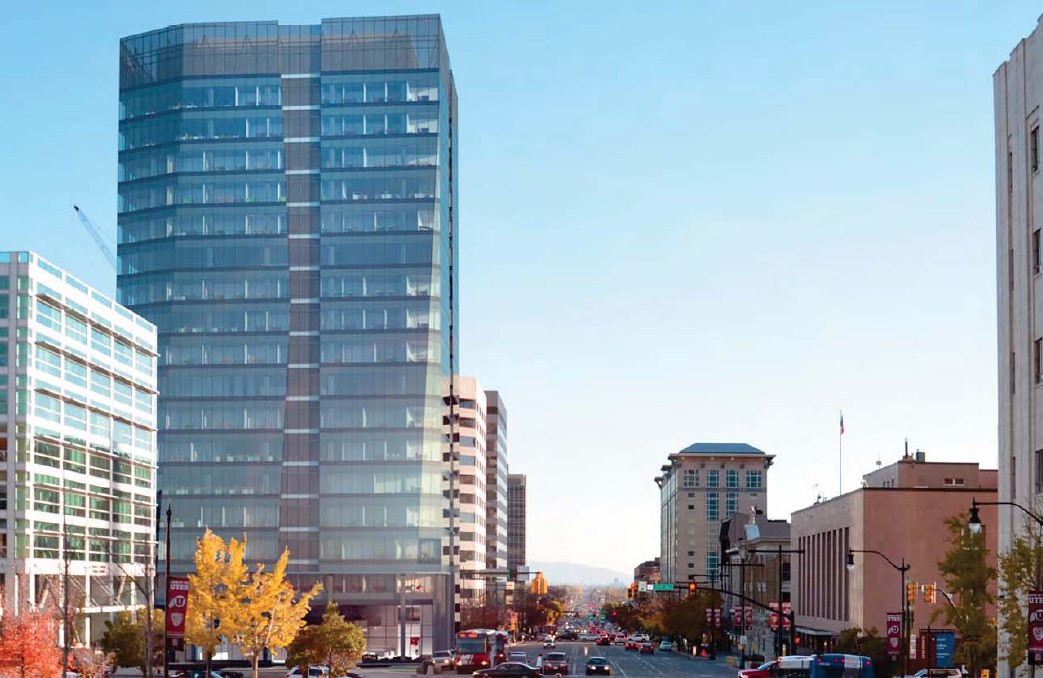 The Salt Lake City Planning Commission approved a time extension Wednesday, for a proposed office tower at 151 State Street in Downtown Salt Lake.  The Planning Commission originally approved temporary building and site design variances for the development last April, with the expectation that construction would begin within a year.

The extension will allow the Boyer Company to build according to the previously approved variances.  The temporary variances ensure that what was approved for the site is specifically for the 151 Tower and not a future project on that site should the 151 Tower not be built.

In the initial Conditional Building and Site Design Review, the Planning Commission expressed concerns about the original design of the rooftop and used the requested height variance as leverage to ensure that the final product has a more distinct rooftop design.

The developers were requesting a significant height variance from the commission.  Under current zoning, mid-block buildings in Downtown can be up to 100 feet.   Developers can build mid-block towers over 100 feet if they comply with Conditional Building and Site Design Review standards.

The 151 Tower will be approximately 22,000 square feet and will take up the entire lot space with limited setbacks from State Street and the parking structure directly to the east.

The original rooftop design was deemed to too similar to the rooftops of 222 South Main Street and the under-construction, 111 Main.   Both 222 and 111 South Main towers are predominately glass with flat roofs.  Because the 151 Tower will also be predominately glass, city planners wanted a distinct rooftop to make the project more visually distinctive from the Main Street towers.

Developers altered the rooftop design to make it more distinctive and worked with adjacent neighbors to create a mid-block thru-way connecting State Street to 200 East to break up the block and make it more pedestrian friendly.  The parking structure is accessed from the new mid-block street and a sidewalk was built along the north side of the parking structure to improve pedestrian access to the area.

The larger than normal setbacks of both immediately adjacent buildings: the Federal Building and 185 South State Building, allow the 151 Tower to function more as a corner building than a typical mid-block building.  The 151 Tower can be built taller without blocking neighboring views, and the addition of the mid-block thru-way allows for multiple access points on the street level.

The site for the proposed 151 Tower has long been vacant and will add to a growing downtown block.  Construction is underway directly east of the proposed 151 Tower, on the Liberty Crest Apartments.  Cowboy Partners is developing the project that will be a seven-story residential building consisting of 177-units.