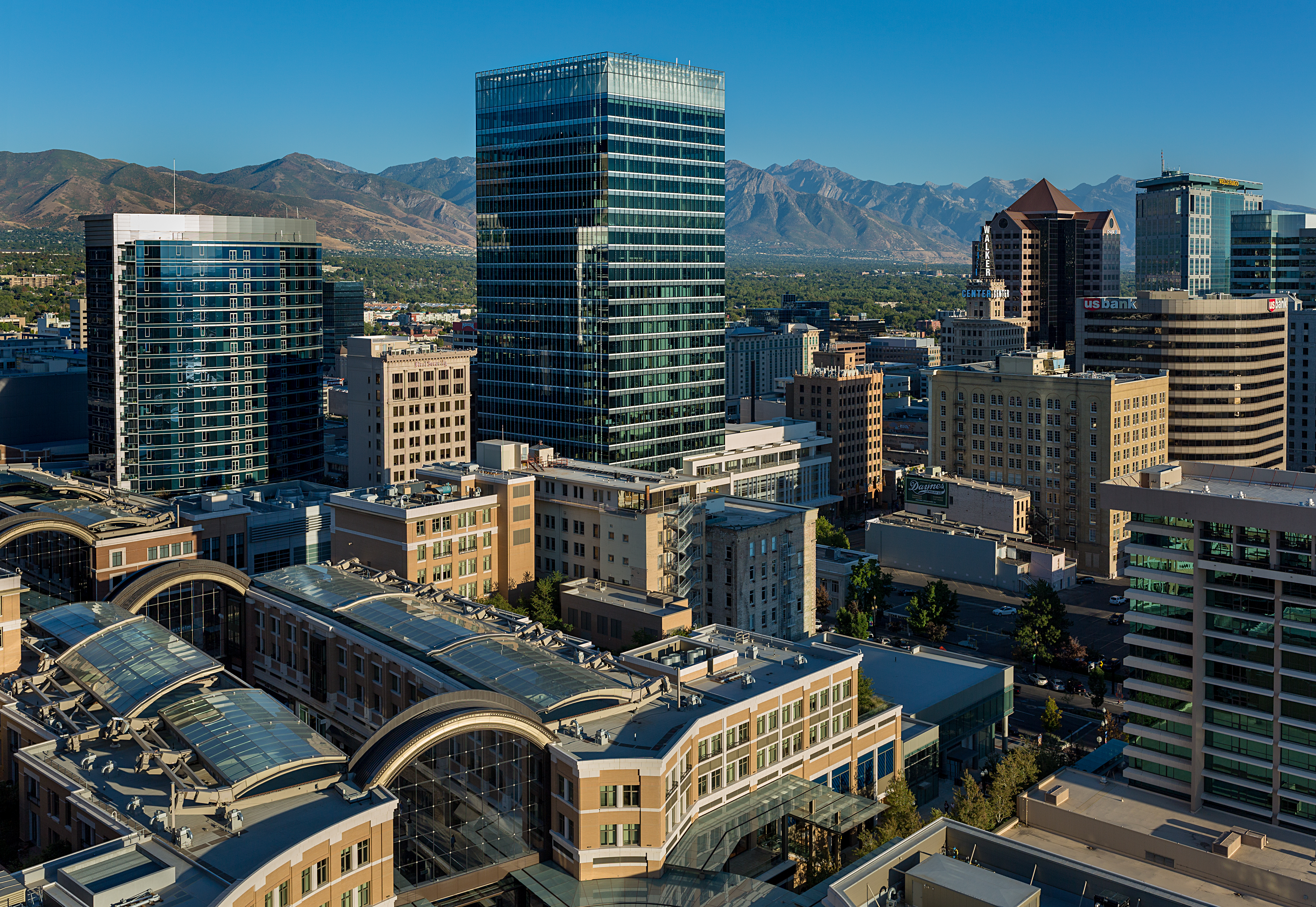 Downtown Salt Lake’s newest office tower is officially open for business.  After an opening ceremony and building benediction by Bishop Gérald Caussé, a counselor in the Presiding Bishopric of The Church of Jesus Christ of Latter-day Saints, officials cut the ribbon today representing the completion of the 111 Main tower, a 24-story office tower at the southeast corner of the intersection of 100 South and Main Street.

The LEED-certified building was designed by Skidmore, Owings & Merril and developed by Property Reserve Inc, the private real estate arm of The Church of Jesus Christ of Latter-day Saints.  The building adds 440,000 square feet of office space and thousands of new employees to downtown.

The tower opens a month before the adjacent George and S. and Dolores Doré Eccles Theater is slated to open to the public.  According to Caussé, the building reflects the LDS church’s commitment to Salt Lake.  Caussé compared the relationship between the 111 tower and the theater to the relationship of business and technology to the arts and culture.

“For members of The Church of Jesus Christ of Latter-day Saints, this is sacred ground,” said Caussé.

The project has several unique features for Salt Lake City.  The office tower was built simultaneously with the George and S. and Dolores Doré Eccles Theater and renovations to adjacent Regent Street.  Because of the building’s relationship with the theater, building engineers designed the building to hang from a hat-truss system that suspends the building’s weight from the rooftop.

The hat-truss system allowed the theater to encroach on the footprint of 111, with a portion of building overlapping the north side of the theater beginning at the fifth floor.  The hat-truss also allows the 35-tall glass lobby to be completely column-free.  The lobby features a 720 square-foot video wall and is separated by a two-story glass wall that opens to the Eccles theater lobby to the south.  The tower’s employee parking on Regent Street is accessed through a galleria in the Eccles lobby.

The tower’s anchor tenant, Goldman Sachs, is using 111 Main to expand its downtown footprint.  Salt Lake is Goldman’s second largest office in the Americas, after New York City, and fourth largest in the World.  The company’s local office headquarters is in the 222 Main building a block south of 111 Main.  With the expansion to 111 Main, Goldman will have close to 2,300 employees working downtown.

“Being in the heart of downtown is a huge draw for us,” said David Lang, the head of the Goldman Sachs Salt Lake City office.

Lang referenced the company’s younger workforce in Salt Lake that “want to live, work and eat downtown” as a driver of the company’s commitment to downtown Salt Lake.  Before relocating downtown, Goldman Sachs operated out of Research Park at the University of Utah.

The Eccles theater will officially open in October with three open houses planned for October 21-23.