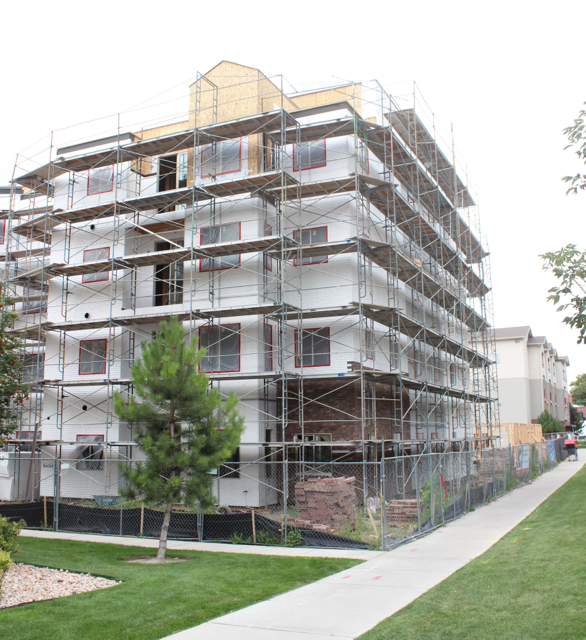 The corner of 600 West and North Temple is about to experience a population boom.  Construction of the next phase of the Bridges at Citifront apartments at 650 West South Temple is well underway.  The 91 residential unit expansion, includes two new buildings on 600 West.

The first of the two new apartment buildings is nearly completed, while framing has begun for the second adjacent building.  Both buildings will look similar to other the residential buildings on the property.

The new Citifront residential units will be directly across the street from the under-construction, North Sixth apartments.  The five-story mixed-use project will have 115 residential units with ground floor retail.  In all both projects will add over 200 new units to the neighborhood.  Both projects are being built right up to the sidewalk which makes the area feel very dense.

While the new Bridges at Citifront apartment buildings won’t have ground-floor retail, the Citifront units closer to North Temple along 600 West and North Sixth’s retail offerings should provide enough retail options for the growing neighborhood.

There will soon be close to 1,000 residential units living with a block of 600 West and North Temple, making it one of Salt Lake’s largest Transportation Oriented Developments (TOD) .  The area is close to the freeway and downtown with a light rail line and a commuter rail line just a block along North Temple.  The area also has dedicated bike lanes on both North Temple and on 600 West.

The neighborhood is within a block of The Gateway, but multiple train tracks and a fenced off parking lot create physical barriers that make the Gateway feel less accessible.  Pedestrian access between the Gateway and Citifront apartments is currently restricted to the North Temple viaduct or cutting through the parking lot behind the new Liberty Gateway apartments from 600 West.

With the hundreds of new residents and new retail opportunities, the neighborhood around Bridges at Citifront is becoming a walkable community where residents can live, work and play without venturing out of the area.  Landscape and streetscape improvements where 600 West meets the train tracks could add to make the neighborhood become more pedestrian friendly while creating a better connection with the neighborhood and the Gateway.