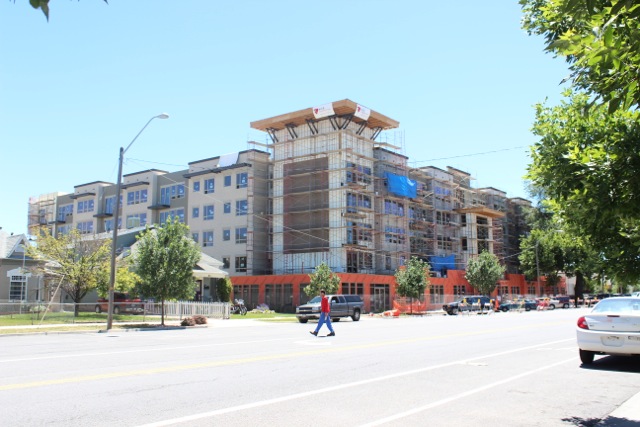 The intersection at North Temple and 600 West used to be a neglected corridor you passed through to go to Red Iguana or to donate plasma.   The North Sixth development, at 55 North and 600 West, continues the trend of denser housing built along the North Temple corridor.  North Sixth follow the Bridges at Citifront and 644 City Station apartments that have brought much-needed density to the area through mixed-used developments.

The North Sixth development is 5 floors with ground floor retail, 4 floors of residential and underground parking.  As is the trend right now on most new large residential projects in Salt Lake, North Sixth will be mixed-income.  Of the proposed 115 units, 29 will be market-rate with 86 units designated as “affordable.”

Like the nearby 644 City Station apartments, North Sixth utilizes a very urban design by building right off the sidewalk increasing street engagement.  The mixed-used aspect of the project will provide more commercial offerings for the new residents added to the area and ensures a more walkable community.

The opening of the North Temple Trax light rail and Frontrunner commuter rail stations last year has made North Temple and 600 West an ideal place for transportation oriented development.   North Sixth is less than a block away from UTA’s Green Line which runs from West Valley City to Salt Lake International Airport and the Frontrunner which runs from Ogden to Provo.

Even with the addition of North Sixth to the North Temple/600 West corridor, there is still an opportunity for more development in the vicinity.  On the northeast corner there is a vacant lot and an underutilized building on the northwest side that are both ready for new development.  It is only a matter of time before the corridor is built out and a walkable community emerges from what was once a place you just passed through.