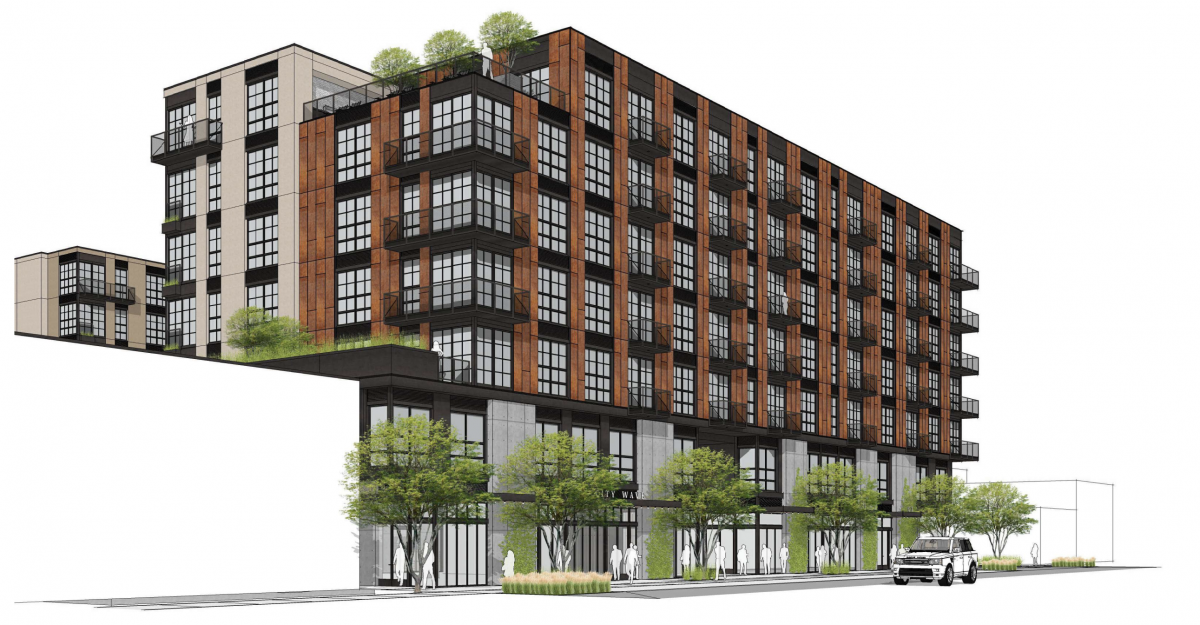 The Granary District is on its way to becoming Salt Lake City’s next food and beverage district, and the latest project to win approval might bring with it an indoor surf wave.

The latest project is called the G3 apartments. It would be built at 634 South 400 West, immediately north of the Granary Campus.

G3 would be a seven-story apartment building with 184 units, most of them studios and one-bedroom units. It would continue adding to the queue of food and beverage options on their way to the Granary as it continues to rapidly change from a largely vacant industrial area into a bustling neighborhood.

The Salt Lake City Planning Commission voted unanimously to approve the project at its meeting on Wednesday night, but not before asking tough questions about a pair of issues.

Commissioner Andra Ghent, from District 5, asked the developer whether their modeling accounted for the number of studio and one-bedroom units in the pipeline — somewhere near 15,000.

“I realize that current rents on studios and one-bedrooms are much higher per square foot than the two-bedrooms and three-bedrooms, but when you do the underwriting are you taking into account that we have 15,000 studio and one-bedrooms coming online in the next year to year and a half?” Ghent asked.

“Some of the challenges of three-bedroom (units) in particular…it’s difficult to justify construction costs versus rent, frankly,” the Lake Union representative, Newton Breiter, said. “It’s just a pretty simple equation.”

The exchange was more of a line of questioning for the developer to consider, rather than a reason the Planning Commission would (or likely could) hold up the project.

Ghent suggested Lake Union Partners — and other developers that continue to fill Salt Lake City’s housing pipeline with small units — to consider the incoming glut of small units when they plan future projects.

Within the Planning Commission’s purview, members took issue with one of the building’s blank walls and asked whether people would feel safe using a new midblock walkway.

The commission ultimately voted in favor of the project, which Breiter said would have murals painted by local artists on the blank walls.

The G3 apartments will effectively be the next phase of the Granary Campus, moving toward the north.

The first phase included the rehab of a building that is now home to the flagship store of the Seattle-based outdoor retailer called Evo. It also has a state-of-the-art bouldering gym, Level Nine Sports outdoor retailer, an indoor skatepark, office space, space for two restaurants and bars and an 85-bed hotel.

While the cluster is being branded as an outdoor enthusiast’s target, Lake Union plans to provide space for the storage of just eight bicycles for residents in the 184 units and eight bicycles for people visiting retail space. It may be that private balconies become de facto storage for mountain bikes, road bikes and e-bikes.

Initial plans showed that Lake Union plans to bring a wave pool to the site. The firm has been sensitive around the topic and told the Commission there was a 25 percent chance that such a water feature happens.

While we don’t know the details behind the scenes, it seems safe to assume that at a time when housing itself is attacked as a draw on the region’s water, housing with a water feature would be a bigger target for criticism.

Breiter did confirm: “We’re playing with the option of one potential tenant being a standing surf wave.”

Such a use shows how thoroughly Lake Union is leaning into its cluster of development as an athlete’s destination, with a bouldering gym, retail center marketed toward outdoor enthusiasts and possible surf spot in Salt Lake.

While there is access to the north via a stoplight at 400 West 600 South, it’s not clear whether the Granary District will ever feel connected with the Post District and Downtown as long as state-owned roads continue dividing it.

The overpasses at 600 South and 500 South and, to an extent, 400 South, create significant barriers and connectivity between the Granary and its neighbors to the north.

Developers should consider whether they want to engage the city and state on a citizen-led plan to remove those barriers via what’s known as the Rio Grande Plan. Until then, Granary, Post and Downtown seem likely to remain distinct and separated from each other.