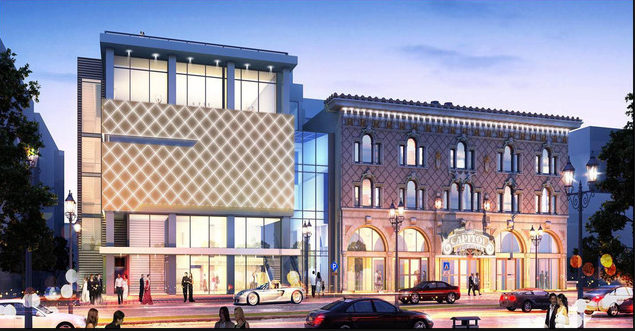 Construction of the $33.4 million, 4-story Jessie Eccles Quinney Ballet Center – the future home to Ballet West and the Ballet West Academy at the Capital Theater has progressed quickly since the groundbreaking last Fall.

The Capitol Theater, at 200 South just east of Main Street in Salt Lake City, has long been an important cultural center for Utah. The theater not only houses Ballet West, but is a popular venue for concerts and Broadway style shows.  With construction underway on the new Performing Arts Center, Capitol Theater stands to lose many its larger shows.   Ballet West and dance are what can make the Capitol Theater stand out among expanding arts venues.

Capitol Theater and the county  are smart to invest in Ballet West.  Reality shows have helped make Salt Lake City renowned for dance.  The Fox Network’s, “So you think you can dance,” regularly visits Salt Lake during the show’s auditions.   The drama of being a part of the Ballet West dance company was documented in the reality show “Breaking Pointe” which ran for 2 seasons on the CW.

The new facility is west of the existing theater and will overlap with the existing structure to add space for an expanded lobby.   The expansion will quadruple the capacity for training and rehearsals with the addition of five ballet studios.  It will also create a location for Ballet West’s professional and pre-professional Academy.   The expansion will also house Ballet West’s administrative offices and the Ballet West Academy.

The project was made possible through a collaboration between Ballet West and Salt Lake County.   Substantial private investments also contributed to make this project happen.   Donors included, a Capitol Theater naming gift from the Janet Quinney Lawson Foundation and the Ballet Centre naming gift from the S.J. and Jessie E. Quinney Foundation.  Additional donations to the project were made by the George S. and Dolores Doré Eccles Foundation, Emma Eccles Jones Foundation, John and Marcia Price Family Foundation, and Frederick Q. Lawson Foundation.

Construction is expected to completed in September with a grand opening in October.