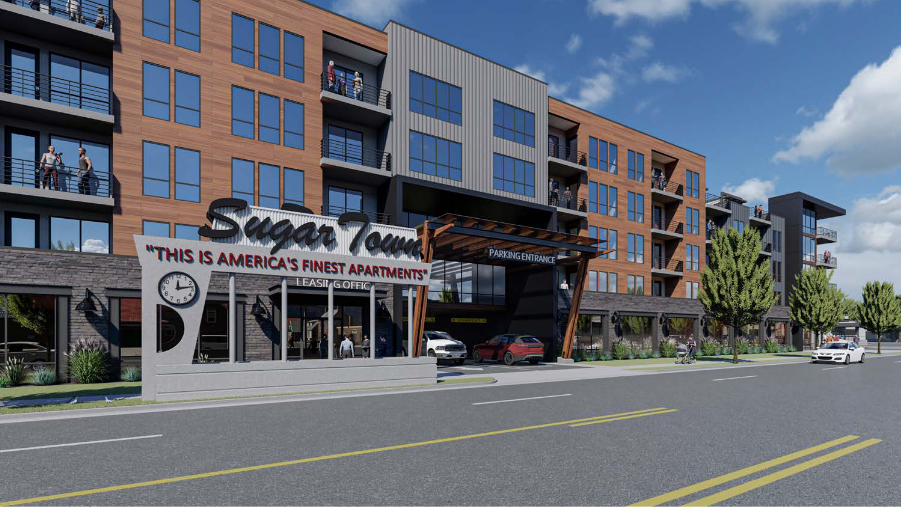 Izzy South, at 534 E 2100 South, brought High Boy Ventures and ajc architects in front of the commission for the second time, responding to comments that their building materials were not differentiated enough at first submission. Their modifications were largely praised by commissioners, who also required the proposed EIFS finishes on the third-floor terraces be replaced by cement board, a more durable material.

The project sits on CB Community Business zoning, and needed to enter design review for three feet of increased height (to 33 ft) and a gross square footage greater than 15,000 sf.

The developers plan a mirror building directly across the street, on the north side of 2100 South.

Sugar House Village, also known as Sugar Town Apartments, the 290-unit mixed-use project at 850 East 2100 South which aims to transform a 4.37-acre light-industrial parcel just west of downtown Sugar House, had its zoning change approved. It goes next to the city council for final ordinance change.

The Sugar House Community Council came out in support of flipping the CC Commercial Corridor designation, which is hostile to residential development, to the less intense of the Sugar House business district zones, SHBD2.

The change will allow the building to reach 60 ft, but is required to step back in wedding-cake fashion from the existing adjacent residential uses to the south across Commonwealth Ave.

The developers have committed to offering the units created by its additional height – 53 of them – at 80% of AMI. The rest of the project is market-rate.

When asked about the possibility of repurposing the existing Snelgrove Ice Cream sign, (“America’s Finest”), the developer’s representative assured that it would be rehabilitated and be prominently placed on 900 East, visible even from the S-Line streetcar station to the south.

The project’s next step is design review. Planning staff notified the commission that the application will be on their desk soon.