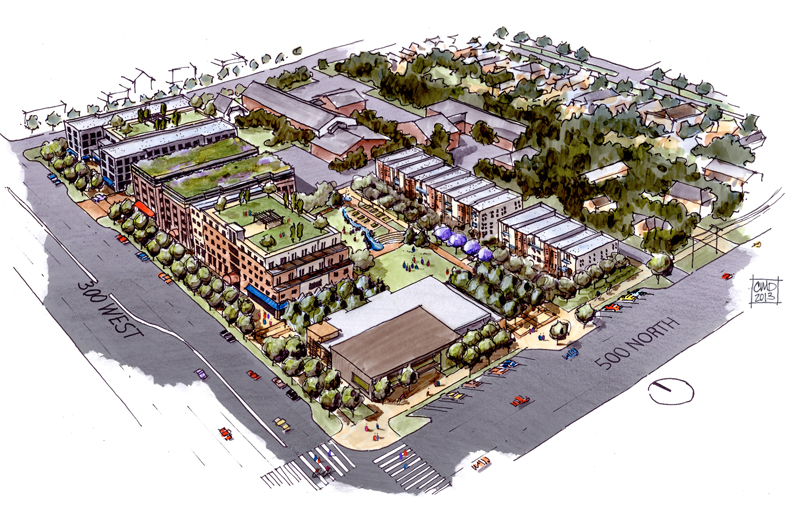 Construction on the next phase of the Marmalade development should commence within a month after the property transfer is completed.   The Salt Lake City Redevelopment Agency (RDA) considered a resolution today that would allow Everest Builders to purchase a parcel of the development of the large block between 500 and 600 North and 300 West in the Marmalade district just north of downtown Salt Lake.

Construction has begun on the centerpiece of the Marmalade subdivision development, a new library branch, on the corner of 500 North and 300 West.  The portion of the development identified as “parcel four” should begin construction shortly after the land is transferred from the RDA to Everest who will be responsible for developing the parcel.

According to the agreement between Everest and the RDA, the developer must “commence site preparation and construction” within 21 business days after closing.  Everest is purchasing the land from the RDA with plans for 12-14 townhomes off 500 North, just east of the new Marmalade library branch.

The resolution passed by the RDA requires the developer to adhere to the block’s designation as a mixed-use area, which requires higher density housing and a mix of retail or office space.  Another bonus to the designation is that the developer must provide structured parking that is built into the development, instead of a surface parking lot.

The block that makes up the Marmalade development has been divided into five parcels and the library branch.  Parcel five will be a small community park, while parcels one and two will be mixed-use projects developed by Clearwater Homes.  Parcel three, at the corner of 600 North and 300 West, has yet to be assigned a developer.

The RDA is requiring Clearwater Homes and Everest to ensure that their developments interact with each other and make the area walkable by providing easy pedestrian access between buildings.  The townhomes will be required to engage not only 500 North but the east Library Plaza that will separate the units from the Marmalade library and the nearby Capitol Villa Apartments.

Under RDA requirements, Everest will need to construct the townhomes under LEED guidelines.  If ownership of the parcel is transferred within the next few weeks, construction on the townhomes could begin in September.  Thanks to the 21-day requirement set by the RDA, construction should begin sooner than later, which is good news for those eager to see the Marmalade district finally evolve into walkable a dense neighborhood that serves as Salt Lake’s northern gateway.