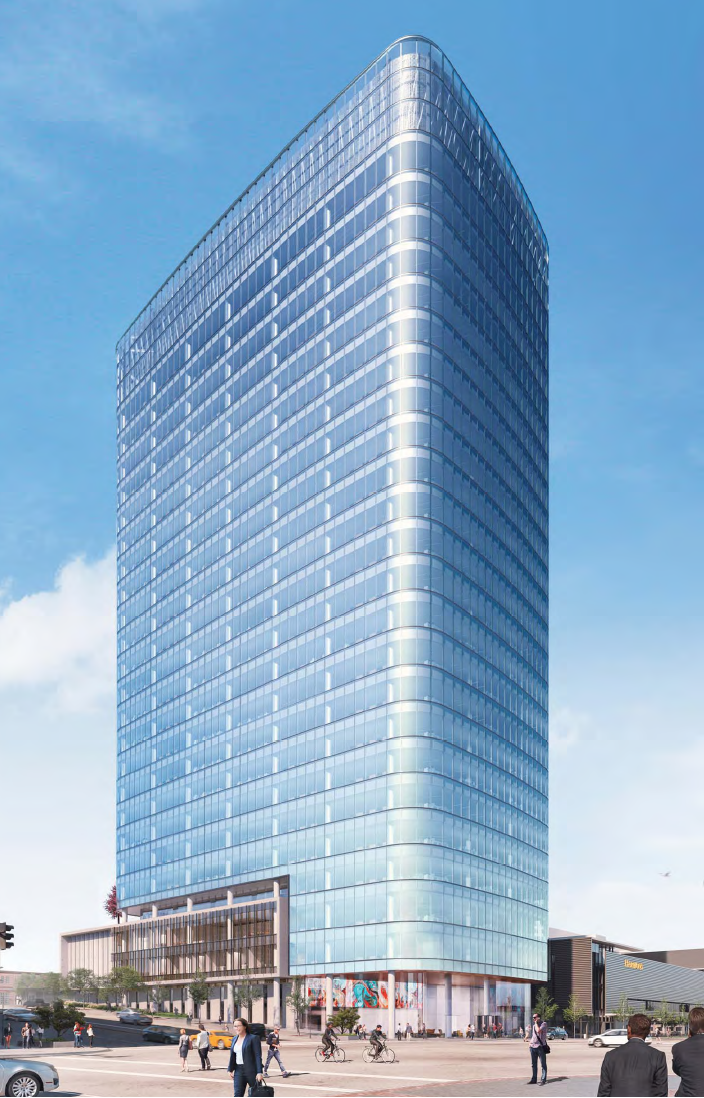 Property Reserve Inc, the private real-estate arm of The Church of Jesus Christ of Latter-day Saints, has submitted more detailed plans to Salt Lake City’s Planning Division for a proposed office downtown tower.  The project, currently referred to as Tower 8, will occupy the northeast corner of the intersection of 100 South and State Street, directly west of the Harmons Grocery Store.

The revised plans not only include more detailed renderings, but the developers are now proposing a 28-story building, instead of the original 26.  Despite the floor increase, the tower would still top out at 395 feet, becoming downtown Salt Lake City’s third tallest tower.

The developers have started the Conditional Design Review process required for projects taller than 375 feet.  Under the D-1 (Central Business District) zone, buildings can be built up to 375 feet without planning approval but projects that would surpass the 375-foot threshold require a design review and planning approval.

Tower 8 has been part of the plans for the three city blocks that make up the City Creek Center since the project was still in the design phase.  Since it’s opening in 2012, the City Creek Center has consisted of two outdoor retail areas anchored by Nordstrom and Macy’s, a Harmon’s Grocery Store and over 530 residential units in four condominium buildings and apartments above the western retail portion.

The proposed office tower is one of two buildings planned for the City Creek Center.  The developers also plan to eventually build The Cascade, a proposed residential tower that would be directly west of the western block’s 100 South parking entrance.

As currently proposed, Tower 8 will be just under 10 feet taller 111 Main, downtown’s newest office tower and another project by Property Reserve Inc.  Like 111 Main, Tower 8 will be most clad in glass and is designed by architectural firm, Skidmore, Owings & Merril.  Despite having a footprint of just 0.74 acres, the site for Tower 8 is larger in area than the site for 111 Main.

The project will share the bulk of its parking with the adjacent Harmons but will add some additional parking via a small parking structure at the building’s north end.  A large lobby and media room will front 100 South.

In addition to office space, the tower will include meeting space for Sunday worship services at the mezzanine and third levels.  Additional tenants have yet to be announced but in August Goldman Sachs announced that they will be relocating dozens of jobs from New York City to Salt Lake City in the near future.  Goldman is the anchor tenant in the 111 Main building.